Also in today’s roundup, Cami Privett retires from professional soccer and the U.S. U-18s leave La Manga without a win. 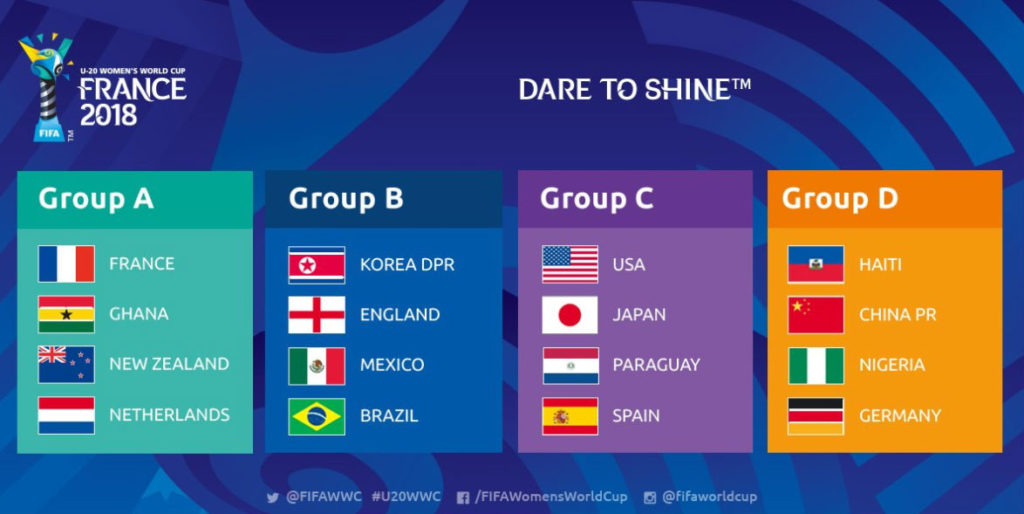 The draw for the FIFA U-20 Women’s World Cup in France 2018 was held today at the Rennes Opera House. The United States was drawn into Group C along with Japan, Paraguay, and Spain.

Mexico and Haiti, the other two CONCACAF representatives in the tournament, were drawn into Groups B and D, respectively. Also included in Group B is North Korea, the reigning U-20 World Cup champions.

The tournament kicks off on August 5 with hosts France taking on Ghana. The United States will also kick off their tournament on the 5th, taking on Japan in Stade Guy Piriou in Concarneau. Their next group stage match will be on August 9 against Paraguay before closing out group play on August 13 against Spain.

The tournament’s elimination rounds begin on August 16, with the final being played on August 24 in Vannes.

Houston Dash defender Cami Privett announced that she was retiring from the NWSL in a post on her social media.

The Dash announced at the start of February that Privett had signed a new contract ahead of the 2018 season, but she has instead decided to pursue a new path instead.

“This past week has been a tough one with soccer coming to an end,” Privett wrote in an Instagram post. “I am retiring from the NWSL and moving to the next chapter of my life.”

Privett has been with the Dash for three seasons after impressing then-head coach Randy Waldrum at open tryouts in 2015 and being invited into camp as a non-roster invitee. She signed a professional contract in Norway but returned to the Dash in 2016 as a member of the active roster. Since then Privett has made 19 starts in 31 appearances for the club.

Her full statement is below.

This past week has been a tough one with soccer coming to an end. I am retiring from the NWSL and moving to the next chapter of my life. First of all, I want to say thank you to my family for making my brothers sit through all of those “miserable” club soccer games. You guys always manage to make my day a little better, and I am so thankful to have such an amazing family. Thanks to all of my teammates for pushing me to be my best self, and making everyday memorable. I can’t wait to watch you guys kick butt this year. Thanks to my coaches (especially Randy) for giving me this amazing opportunity that I will remember forever. Last but not least, thanks to the dash fans. You guys have showered me with so much love and support since day one. Without you guys this league wouldn’t be where it is today. Now I am apart of the dash fans, and I can’t wait to see what the dash future has in store. I will forever bleed orange. #dtfo #houstonsCP23

The U.S. U-18 women’s national team ended the 12 Nations Tournament in La Manga, Spain with a 1-1 draw against Norway. The result marked the end of a lackluster showing by the U.S. in the U-19 tournament that also saw the U.S. draw England, 2-2, before being shut out by the Netherlands, 6-0.

Loren Sefcik put the U.S. up a goal with a header in the 12th minute, but the team were unable to hold onto the lead. Jenny Kristine R. Olsen pulled Norway back level in the final minute of the first half when she scored on an open net, capitalizing on a deflected pass by U.S. goalkeeper Claudia Dickey.

Neither team was able to break the deadlock in the second half, and the game remained at a 1-1 stalemate at the final whistle.