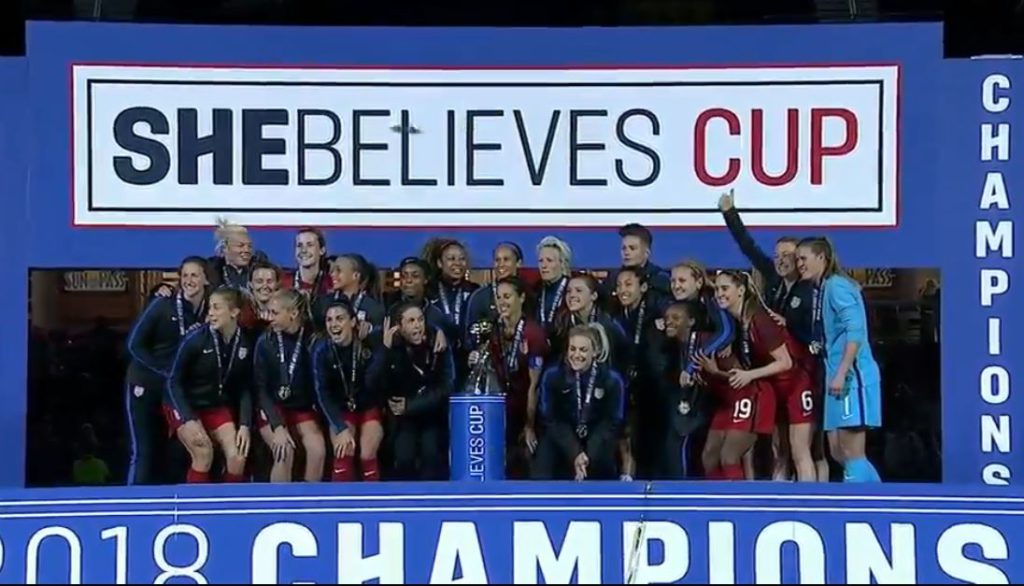 The United States defeated England 1-0 on Wednesday night in Orlando to finish the 2018 SheBelieves Cup as undefeated champions. A Megan Rapinoe cross was deflected in by Millie Bright for an own goal in the 58th minute to account for the only tally. The own goal was Bright’s second in as many matches.

England needed just a draw to win SheBelieves for the first time, but could not find an equalizer and finished second, ahead of France on goal difference. Germany finished fourth.

The U.S. lineup featured a few changes, notably at outside back, where coach Jill Ellis was forced to her bench. With Casey Short injured and Kelley O’Hara also struggling physically, Ellis elected not to go back to Taylor Smith, who was pulled late in the first half in Sunday’s 1-1 draw against France. Instead, Crystal Dunn was inserted at left back and Emily Sonnett went out on the right in her first appearance of the tournament. In the midfield, Lindsey Horan was joined by Carli Lloyd and Allie Long. For Lloyd, it was her 250th appearance for the team, sixth in the history of the program.

The Americans were the dominant possession team throughout the first half but rarely had much to show for their work. They finally ended the half with a flurry that saw two golden opportunities narrowly miss in the final five minutes.

In the 43rd minute, Rapinoe attacked up the left side and played a give-and-go with Horan which allowed her to cut toward the goal line. Rapinoe sent in a low cross that England keeper Karen Bardsley reached out to deflect away, and the bounce came within inches of Carli Lloyd who would have had an easy tap in.

In the 45th, Pugh found herself matched up in one of many battles against Demi Stokes. The England left back properly prevented Pugh from cutting toward the goal, but in taking the ball to her left, the American teenager beat Stokes going all the way across the box. She then evaded a slide tackle from Izzy Christiansen and ripped a shot that skimmed off the outside of the post.

The start of the second half saw the U.S. keep up the pressure and send England coach Phil Neville to his bench after barely five minutes. Following an England attack that saw one of those subs, Toni Duggan, fire a shot just wide of the U.S. goal, Alyssa Naeher’s goal kick was touched by only American players until Bright knocked it in for the own goal.

The key moment in the build-up was when Rapinoe passed to Horan, who calmly handled England pressure before finding Dunn. The fullback then found Rapinoe, who was deep down the left side. Her cross appeared to be targeted for Morgan but Bright touched it in as Bardsley played things passively and Lucy Bronze also stood nearby adding to the chaos.

England’s best chance to tie the match was in the 87th minute off a set piece taken short from just beyond the top of the penalty box. Ellen White had a free header on the end and an open pocket at the upper corner, but somehow hit it wide.

For the United States, it was their second title in three SheBelieves Cups with the wins sandwiched around a last-place finish in 2017. England’s runner-up performance, in their first games with Neville in charge, is their best finish in three.