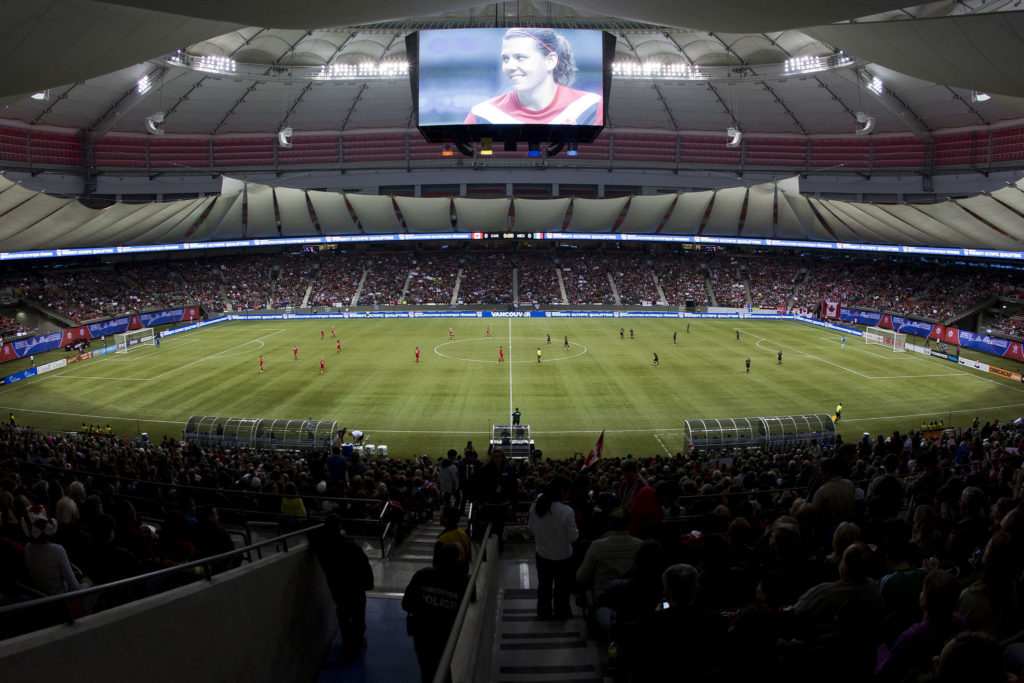 VANCOUVER — The Equalizer has learned that Vancouver Whitecaps FC are looking at 2019 as the date they could join the National Women’s Soccer League.

The Caps have had quite a long, on-going due diligence process in which they’ve looked at finances, logistics, sustainability, and what would be required to operate a Whitecaps FC NWSL team. Vancouver’s previous women’s team folded following the 2012 USL W-League season. That team played at various venues throughout metro Vancouver.

Through multiple sources, The Equalizer has also learned that a potential Whitecaps FC NWSL team would play matches in downtown Vancouver at B.C. Place Stadium. In order for a women’s side to be viable, Whitecaps FC’s research has determined that targeting an average attendance of 7,000 spectators at B.C. Place is the goal.

The Caps have taken note of what Portland Thorns FC have created at Providence Park, and they would very much like to create a similar match-day experience and environment at B.C. Place.

While Vancouver fans have long supported and turned up for the occasional Canada Soccer friendly against teams like Mexico, the jury is out on whether or not that same consistent fan support would be there at a club-team level on a consistent basis throughout the spring and summer months.

An NWSL spokesperson wasn’t willing to divulge any details on the Caps intention to join the NWSL in 2019.

“We continue to have an open dialogue with the Whitecaps, and still believe Vancouver is a great market with passionate fans and a strong soccer infrastructure.”

The Whitecaps did not immediately respond to a request for comment.

Whitecaps FC have one of the top training centers in all of Major League Soccer. The National Development Soccer Centre opened last summer at the University of British Columbia. The 38,000 square-foot field house is home to the MLS team. That’s currently the only professional team using the facility. There is plenty of room for an NWSL team to be welcomed aboard.

The popularity, growth, and level of interest in women’s soccer continues to make massive strides throughout the world. Vancouver has interest in joining the professional ranks, and it’s apparent that ‘due diligence’ has led the Whitecaps towards a decision in which they are targeting 2019 as the opportune time to join the NWSL.

If Vancouver does join, it could be in conjunction with an Southern California-based team that would be a partnership between Barcelona and MLS expansion side Los Angeles Football Club (LAFC).

It’s likely that a familiar face on the roster would be key to Vancouver’s plans. Abbotsford, B.C., native Sophie Schmidt would be perfect if she can be lured home from FFC Frankfurt.

Speaking to The Equalizer in February 2017, Schmidt said she could be enticed to come back to her hometown to play professional women’s soccer, if the opportunity ever arose.

“Yeah, I’m getting on in my years, getting towards the end of my career and I would love to end it (in Vancouver) if that were to present itself,” Schmidt said.

Legendary Canada captain Christine Sinclair, who has played for Portland since the NWSL’s first season in 2013, is a Burnaby, B.C., native and would be the crown jewel for any Vancouver team. She played for the Whitecaps from 2006-2008, when there was no North American professional league.