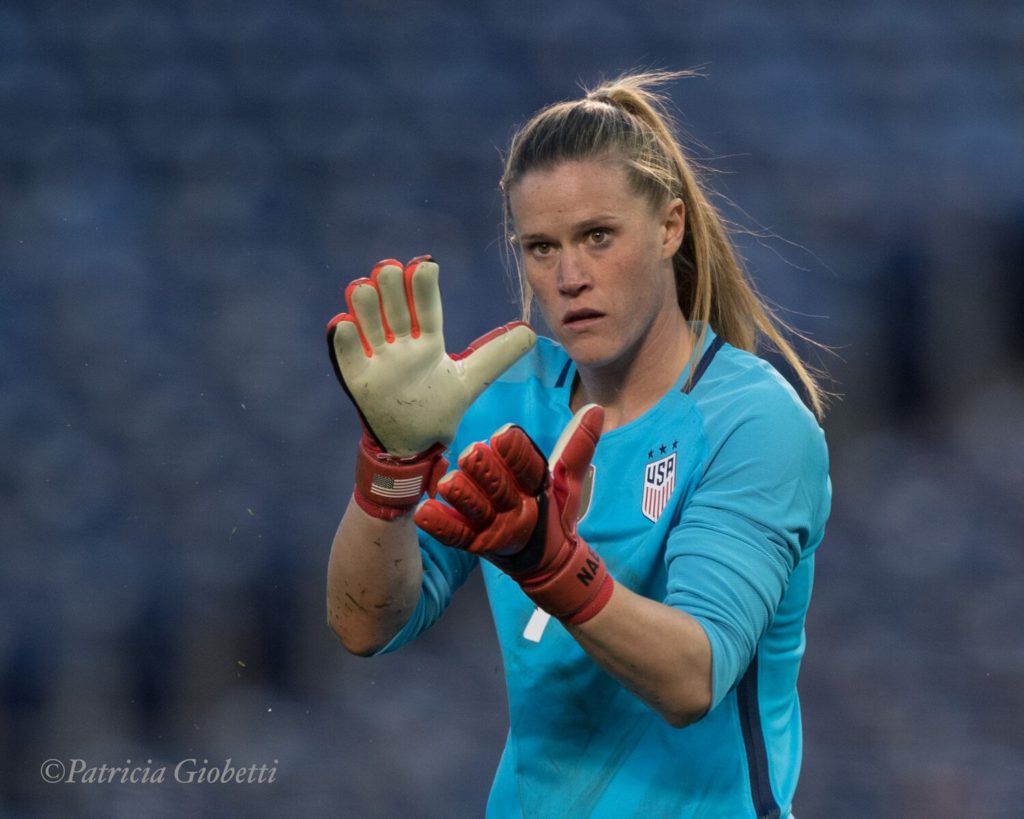 Thursday’s SheBelieves Cup opener between the United States and Germany won’t be one for the DVD archives, but the result will be suitable to U.S. fans after the home side rode a quick-strike goal from Megan Rapinoe to a 1-0 victory at MAPFRE Stadium in Columbus. An identical result against Germany in last year’s event only portended a disastrous ending to the tournament, but this is a different U.S. team no longer playing a formation hatched without any consideration about the personnel. This is a U.S. side that may just be learning how to win again.

Here are three thoughts on the match.

The wind killed the beautiful game

My most poignant takeaway from the match was the wind. It was bad. And it got worse. A second-half shot by Lindsey Horan was never likely to go in, but it was quite a site to see two German defenders just kind of stare at the ball as it died at their feet. In the second, Alyssa Naeher’s goal kicks, punts, and clearances never had a chance to make it to midfield. Worst of all, the team with the proverbial “wind at its back” barely had an advantage. The conditions were, at best, swirling, and few passes of more than a few yards were routine. The second half was considerably worse than the first.

The snarling conditions make it easy to write off the match as a fluke without any significant tactical takeaways. And to some extent, that is true. But bear in mind there is no law that says a World Cup knockout match can’t be played in heavy winds, torrential rain, oppressive heat, or other unusual conditions. At the end of the day, the onus is on the players to be better than their opponents regardless.

On this night, the U.S. did a far better job adapting to conditions than Germany. Ironically, the team that was up against it was probably better in each half. The first 45 are open to debate, but Germany—playing against the wind—clearly had their best stretch of the match in the middle of it. The U.S. looked up against the wind in the second but spent way more time being dangerous than Germany. The Germans barely managed to get pressure in the dying moments trying to push for the equalizer, and what pressure they got was hardly meaningful.

A year ago, Alyssa Naeher started the opener before Ashlyn Harris got the nod against England in what was an open competition to kick off the post-Hope Solo era of USWNT goalkeepers. This time around, for reasons not fully clear based on 2017 performance, Naeher entered the SheBelieves Cup as the team’s top keeper, and Jill Ellis’s plan is to play her throughout the tournament.

It is no secret that Naeher did not close 2017 on a high note. In the Chicago Red Stars’ NWSL semifinal loss to the North Carolina Courage, she hit at least four goal kicks directly out of play—if there was wind that day, it was negligible compared to Thursday against Germany—and made at least a few questionable decisions.

That’s not to say that I think Naeher should not be the No. 1 keeper in the pool. Harris was injured for much of the summer, Jane Campbell is promising but not quite there yet, and Adrianna Franch was in January camp but left off the SheBelieves camp roster through injury (a fact noted by Ellis on a conference call but not in the U.S. Soccer release that did acknowledge injuries for Rose Lavelle, Sam Mewis, Tobin Heath and Becky Sauerbrunn). That would likely leave Naeher on top of my personal depth chart, but I would also be more open than Ellis seems to be of having that chart shaken up.

As for Thursday, Germany didn’t exactly pepper Naeher with many shots, but she played a smart, measured match and appeared to be locked into the situation with the wind. I’m not sure why she kept taking goal kicks that inevitably died about a third of the way up the field, but it is also a distinct possibility that those calls were coming from the bench.

If we’re giving Naeher 2017 the benefit of the doubt on injuries, then this was a positive night for the top goalkeeper on the squad. And let’s not forget that before she was kicking into the wind it was Naeher’s punt that Alex Morgan flicked ahead to Rapinoe for the only goal of the night.

It might be time to worry about Germany. The transition to Steffi Jones as head coach after Silvia Neid retired has been a rocky one at best. The Germans were dull in the 2017 SheBelieves Cup and then crashed out of the EUROs at the quarterfinal phase to Denmark. In October, Jones’s side lost a home World Cup qualifier to Iceland. As the table stands today they will need to win in Iceland on September 1 to stay out of a tense playoff for the final European spot.

Germany did win the European Championship six times running before Denmark picked them off last summer and no streak lasts forever, but several key players have left the side since the 2015 World Cup. They overcame Celia Sasic’s retirement to win the gold medal at the 2016 Olympics but have since lost Melanie Behringer and Anja Mittag as well. Captain Dzsenifer Marozsan, who had her moments during Germany’s first-half flurry on Thursday, has tended to disappear against high-quality international opponents.

Last year it was the United States who left SheBelieves searching for answers. This year it could well be Germany.