Canada lost 3-1 to Sweden in the opener of the 2018 Algarve Cup. (Photo: Canada Soccer)

Kenneth Heiner-Møller’s debut as head coach of Canada ended in a 3-1 loss to Sweden which puts a hige dent in his side’s chances of winning the Algarve Cup. Nichelle Prince found an equalizer to Mimmi Larsen’e opener almost straight out of halftime but defensive blunders did in the Canadians later in the second half. Fridolina Rolfo provided the winner in the 52nd minute and Stina Blackstenius iced it in the 82nd.

“Despite the score line, we saw a lot of positives in this match,” Heiner-Møller said. “There are certainly things we will take away and work on before we face Russia, but overall the players put a lot out there tonight and we are proud of them. We’ve asked this team to be the most creative group in this tournament and to continue building on the efforts that saw Canada draw the USA in November – a tactically creative, enjoyable form of soccer – and they did that tonight.”

In the other Group B match, South Korea scored three unanswered to defeat Russia, 3-1. Lee Min-na tied the match in the closing minute of the first half and Chae-Rin Han and Jung Seol-bin converted in the second. Russia led after Anna Belomyttseva’s 17th minute strike.

Canada play Russia on Friday and must now see Sweden lose a match in order to have a chance of advancing to the championship match.

Group A: Australia 4-3 Norway: Larissa Crumer’s 95th minute goal gave shorthanded Australia a dramatic win over an inspired Norway side. A wild opening half saw Norway go on top through Elise Thorsnes before Australia hit three straight behind Claire Polkinghorne, Chloe Logarzo, and Sam Kerr. Norway came out flying in the second, getting one back from Lisa-Marie Utland and then an equalizer from the spot from Thornses.

Group A: Portugal 2-1 China : Portugal won a match at their home tournament for the first time in four years, beating one-time world power China on Carole Da Costa’s 80th minute winner. Caroline Mendes also scored for Portugal three minutes after Xu Yanlu put China on top. The win is the first for Portugal at the Algarve since the 2014 opener when the defeated Austria, 3-2. In 2015 they drew China in the placement match and won, 8-7 on penalties to avoid finishing last. They did finish last each of the past two seasons.

Group C: Netherlands 6-2 Japan: The European champions pounced on Japan early and showed no mercy taking a 5-1 lead to halftime. Lieke Martens scored twice and the quarter of Lineth Beerensteyn, Siri Worm, Shanice van de Sanden, and Stefanie van der Gragt all had goals. Emi Nakajima and Mana Iwabuchi converted for Japan who trailed 2-0 after 8 minutes and 4-0 after 35.

Group C: Denmark 0-0 Iceland: Denmark’s prep for a rematch of last summer’s European Championship against the Netherlands ended in a 0-0 draw with Iceland. Both teams remain capable of winning the group without help from the Netherlands or Japan.

And in Wednesday Cyprus Cup action:

Group A: Wales 1-0 Finland: Kayleigh Green scored the only goal at the 56 minute mark to give Wales an opening day victory.

Group A: Italy 3-0 Switzerland: Cristiana Girelli scored four minutes in and three minutes from final to boost Italy to the top of the group. Valentina Bergamaschi added one in the 37th to give the Italians a two-goal lead at halftime.

Group B: Czech Republic 2-1 Belgium: Katerina Svitkova and Tereza Kozarova scored in the opening half hour and the Czechs held on to edge Belgium. Tine De Caigny pulled one back in the 76th but Belgium were unable to find an equalizer.

Group B: Spain 2-0 Austria: Last year’s Algarve champs got their Cyprus Cup off to a bright start by blanking their fellow Europeans. Olga Garcia scored just after a half hour and Mari Paz Vilas delivered the insurance on 76 minutes.

Group C: Slovakia 0-0 South Africa: There were no goals to be had in this opener in what figures to be a wide open Group C. Houston Dash defender Janine Van Wyk wore the captain’s armband and went the distance for South Africa.

Group C: North Korea 2-0 Hungary: North Korea went to the top of the group on the strength of a brace by Kim Jun-mi. The goals were scored in the 56th and 89th minutes. 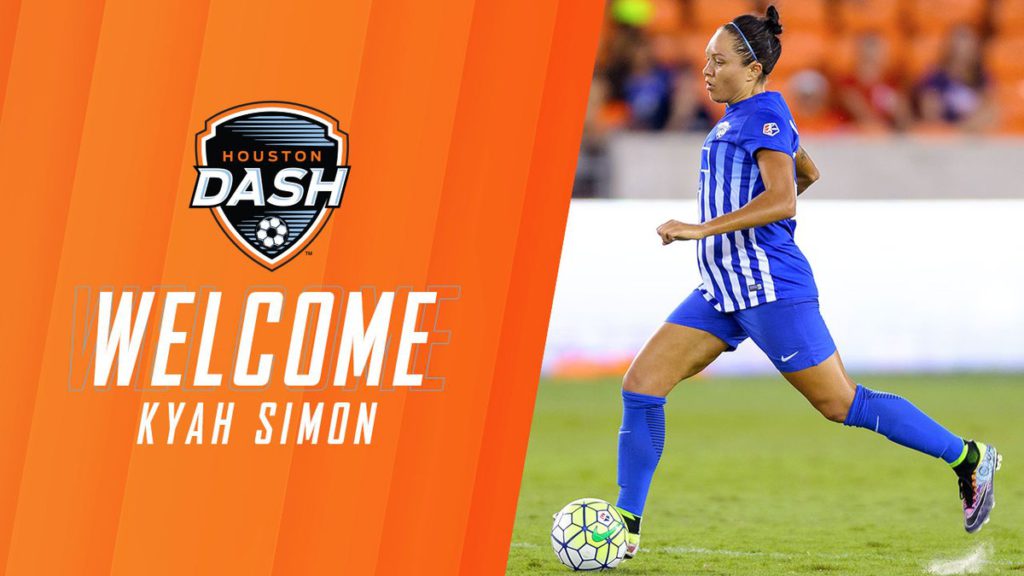 The Houston Dash have officially signed Kyah Simon. The Australian was selected by the Dash in the Boston Breakers dispersal draft and she inked a deal to return to NWSL. She had played for the Breakers since the 2012 WPSL Elite season but did not come for 2017. The Breakers retained her league rights though.

Simon most recently played for Melbourne City FC in Australia. Melbourne won the Grand Final but Simon was injured in the match. She will rehab in Australia before joining the Dash. The club did not provide a timeline.