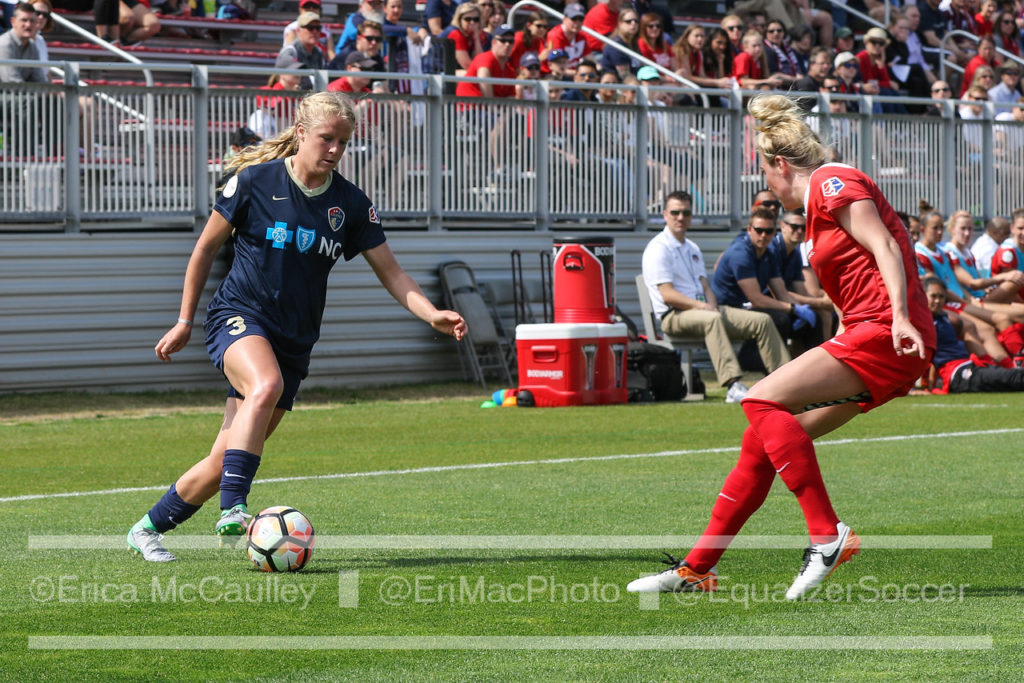 Makeny Doniak’s season is over after she tore her left ACL on opening day of 2018 preseason. (photo copyright EriMac Photo for The Equalizer)

Makenzy Doniak has torn her ACL. The third-year North Carolina Courage player injured her left knee on her first day of preseason this week and her coach Paul Riley announced via Twitter that Doniak tore her ACL. The former 2nd round pick will turn 24 on Sunday.

CourageCountry: unfortunate injury news. Mackenzie Doniak tore her ACL during first day of pre season.We want 2 wish Mac a quick &full recovery. She has been a massive part of our club last few years & we will be with her every step of her recovery. ❤️ #grittoday#growthtomorrow

Doniak enjoyed a distinguished career at Virginia where she graduated as the school’s all-time leader in points and goals. The Western New York Flash made her the first pick of the 2nd round in the 2016 draft and she appeared in every match for the club including the NWSL Championship which they won over the Washington Spirit. Doniak made the move with the club to North Carolina and was again a regular for Riley on the club that won the Shield and returned to the NWSL Championship only to lose to the Thorns.

The Courage say Doniak will miss the entire 2018 season. She will remain with the team during her recovery.

Jill Ellis has named her final, 23-woman roster for the SheBelieves Cup. After taking 26 to camp in Orlando, Ellis has dropped Ashley Hatch, Rose Lavelle, and Ashley Hatch to get to the roster limit for the tournament.

The U.S. won the inaugural SheBelieves Cup in 2016. (photo by US Soccer)

“We have an experienced and hungry group of players who are excited to take on a big rival,” Ellis said, referencing Germany against whom the U.S. will open next Thursday. “The players relish the opportunities to play the absolute best teams in the world and after a really productive week of training in Florida, we’re ready for the unique challenges that each of these teams will present.”

Following the Germany match in Columbus, the tournament will move to New Jersey on March 4 where the U.S. will play holders France, and then to Orlando where the U.S. will face England in Orlando. All three match-days will feature doubleheaders. The U.S. won the inaugural SheBelieves Cup two years ago.

The 23-woman SheBelieves roster is: