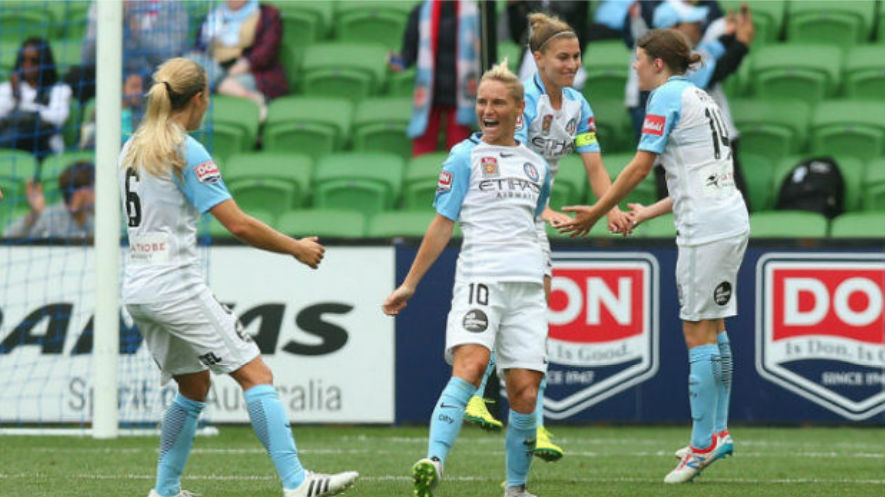 Melbourne City FC created history today when they defeated Sydney FC 2-0 in the 2018 W-League Grand Final to win their third consecutive league championship. Not only does this give Melbourne City more championships than any other club in W-League history, they are also the first team in either currently existing Australian men’s or women’s league to win three straight championships.

Played in front of a record-setting crowd of 6,025, the most ever at a W-League Grand Final, the match was fairly even at times although Melbourne City proved to be more aggressive in the attack. Neither goalkeeper was kept extremely busy as their defenses snuffed out attacks more often than not, while the midfield battle ebbed and flowed, eventually conceding in Melbourne’s favor.

Jess Fishlock scored the opening goal in the 35th minute. Sydney goalkeeper Aubrey Bledsoe nabbed a free kick taken by Lauren Barnes and rolled it out to defender Georgia Yeoman-Dale but collided with Melbourne striker Kyah Simon on her way back to her line, leaving her on the ground momentarily. Fishlock took advantage of a heavy touch by Yeoman-Dale to strip her off the line and chip Bledsoe as the keeper scrambled to get back into position. Bledsoe called for a foul on Simon but was waved off.

Jodie Taylor doubled Melbourne’s lead in the 75th minute after Bledsoe pushed a free kick from Fishlock onto the post, leaving an open net. No Sydney defender tracked back, leaving a free tap-in for the English international.

Jodie Taylor made it 2-0 and that sealed the #WLeagueGF for @MelbourneCity!

It was a treat for NWSL fans, as 11 of the players on the pitch are expected to play in the NWSL this season, including six from Seattle (all six on Melbourne City). However, both NWSL and Matildas fans were left with some concern after Simon (expected to play for Houston this year) left the match on a possible hamstring injury and Seattle keeper Lydia Williams was left limping after a collision in her box, forcing defender Alanna Kennedy to take her goal kicks for the rest of the game.

Here are some observations:

Miss of the season

In another world, this game could have gone entirely differently. In the 9th minute, Matildas striker Lisa De Vanna was played in by Chloe Logarzo on the left side of the six-yard box after some clever footwork between Logarzo and Leena Khamis. De Vanna was free of her defenders but sent it wide as Williams rushed to close down her angle.

De Vanna has scored a plethora of stunning, timely, and game-changing goals in her long career and continues to do so (most notably a week ago to advance Sydney) despite being in the twilight of her career. Ninety-nine times out of 100, she would have nailed that goal, and it could have set a completely different tone for the game. An early goal to give Sydney confidence and force Melbourne to play from behind changes the script. Should have, would have, could have, but she didn’t, and Sydney were left to rue missed chances.

Controversy in the box

Perhaps more likely to be discussed over the water cooler than De Vanna’s miss is whether or not Bledsoe was fouled prior to Fishlock’s opening goal. The collision with Simon occurred after Bledsoe had already released the ball, and in fact it was Bledsoe who backed into the striker, neither recklessly nor deliberately. Simon did not prevent the keeper from releasing the ball, nor did she play in a dangerous, reckless, or careless manner. The only possible foul that could have been committed is impeding the progress of an opponent. However, the laws of the game are open to interpretation by the referees, and none of the officials agreed with Bledsoe’s argument.

For what it is worth, I agree with the non-call. It was nothing but incidental contact, and while officials do and should protect the keeper, there was simply nothing to protect her from. Given how quickly and powerfully Fishlock launched her shot, it’s also likely that Bledsoe would have been chipped regardless of her time spent on the ground.

While neither Melbourne goal was a direct result of a set piece, each scoring opportunity was created by first a set piece and then a defensive error. This has been one of Sydney’s biggest weaknesses all season long and proved fatal in the Grand Final.

On the first goal, it was Logarzo who came from behind on Fishlock to give away the free kick. It was early in the game and not in the most dangerous of positions, and it was less of a deliberate foul and more of an attempt to play the ball from a risky angle that also resulted in a tangle. So while it wasn’t the worst of decisions from Logarzo, it was a legitimate foul. Fishlock is an experienced player who knows when to get a call, and in this instance, it ultimately ended up working to her advantage.

The second goal resulted from a rather poor decision from Emily Sonnett. The speedy Rhali Dobson, a substitute with fresh legs, was making a run, but she wasn’t in on goal, and Melbourne only had two players near the box to Sydney’s four. Sonnett had support but went in too hard, getting Dobson before the ball. Sydney only needed one goal at this point to bring themselves back into the game, but giving Melbourne an opportunity to extend their lead put it out of Sydney’s reach.

More egregious than the foul was the fact that not a single Sydney player tracked back into the box on the free kick. It was ball-watching at its worst, and only red Melbourne jerseys were even inside the six-yard box to collect the rebound. Bledsoe did her job there but was let down by the rest of her team.

Is dominance a good thing?

Melbourne City supporters are flying high. While the team hasn’t come close to repeating their perfect first season, they’ve won every single championship since entering the league in 2015. The last two seasons have seen them overcome underwhelming stretches during the regular season to creep into the fourth playoff spot before rising to the challenge to claim the championship.

The club has set the bar for the W-League in every way, be it facilities, equitable treatment compared to the men’s side, or a willingness to chase top talent. Each year they’ve assembled the cream of the crop among the league, and they deserve every bit of praise that comes their way.

That said, the challenge is clear to all other eight teams in the league. It’s the W-league Championship, not the Melbourne City FC Championship. Don’t let it become predictable.

The remaining American players in Australia (plus Rebekah Stott) should be returning soon to prepare for the sixth NWSL season, which kicks off preseason Monday. However, the internationals will be joining their respective national teams to prepare for the upcoming Algarve, Cyprus, and She Believes Cup. The NWSL season kicks off on March 24th.