The Portland Thorns have signed Australian defender Ellie Carpenter for the 2018 NWSL season.

The Portland Thorns have signed Australian defender Ellie Carpenter per a team announcement on Tuesday pending receipt of her P-1 Visa and International Transfer Certificate. The defender is scheduled to join the Thorns on April 28, her 18th birthday.

“Ellie is regarded as one of the top young players in the world and we are delighted by the opportunity to further her development,” said Gavin Wilkinson, general manager and president of soccer for Thorns FC, in the team’s official statement. “She fits a positional need and we look forward to her joining the club after she turns 18.”

Carpenter, who earned her first cap with Australia’s senior national team when she was 15 years old, currently has 13 caps with the Matildas. She made her debut during the team’s Olympic qualifiers in 2016 and was the youngest member of Australia’s Olympic squad for the 2016 Summer Games in Rio. She scored her first international goal at last year’s Algarve Cup, helping the Matildas finish in fourth place, their highest finish in the tournament.

She most recently played for Canberra United in the Australian W-League, making 10 starts in as many appearances. She recorded two goals and two assists on the season and was named the Supporters’ Player of the Year and Player of the Year.

Real Salt Lake (RSL) has partnered with KSL in a multi-year deal to offer more than 200 hours of digital streams of RSL, Utah Royals and Real Monarchs matches to residents of Utah and surrounding areas.

The games—in addition to ancillary content such as weekly highlight, magazine and coaches’ shows—will be accessible to fans’ phones, tablets, and other streaming devices through the “KSL TV” app and on www.KSL.com.

KSL.com’s marketplace section will also serve as the primary ticketing outlet for the RSL and the Royals.

“Technology is rapidly developing, and we believe that KSL TV has created a best-in-class app experience for both live and on-demand content, which will deepen our fans’ accessibility and connection across the globe,” Utah Royals owner Dell Loy Hansen said in the team’s official announcement.

For fans outside of the Utah area, Royals matches will still be accessible via the go90 and NWSL websites and apps. 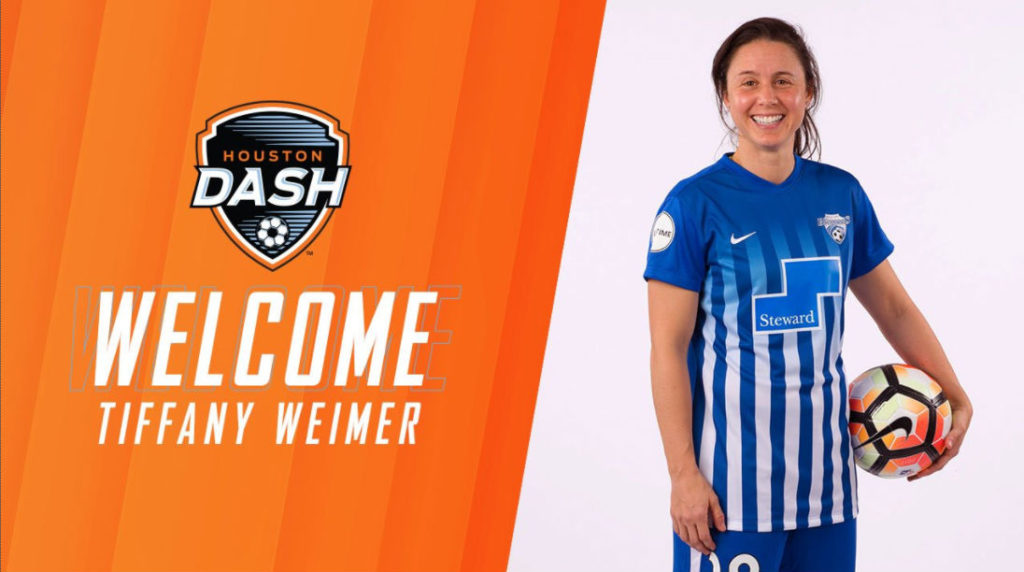 The Houston Dash announced on Tuesday that they had acquired forward Tiffany Weimer in a trade with the Washington Spirit. In return, the Spirit have received the Dash’s natural fourth round pick in the 2019 NWSL College Draft.

The 34-year-old was selected by the Spirit as the No. 20 overall pick in last month’s dispersal draft. She spent the 2017 NWSL season in Boston, where she scored one goal in 17 appearances for the Breakers. She spent part of 2016 with FC Kansas City before signing with Kvarnsvedens IK of the Damallsvenskan, the Swedish premier league.

Before being selected by the Spirit in the dispersal draft, she was previously rostered with them for the 2014 and 2015 seasons, although she only made four appearances for the club because of a knee injury. She spent part of the 2013 season with the Portland Thorns, scoring the game-tying goal in the semifinals before helping them win the inaugural NWSL Championship.

With the 25th edition of the Algarve Cup kicking off at the end of the month, a number of countries—Sweden, Korea Republic and Denmark—have announced their rosters ahead of the tournament.

Norway head coach Martin Sjögren has named 19 players to his Algarve Cup squad, although tournament rules allow 23 players per team. The Norwegians were drawn into Group A, where they will open their tournament play against Australia. They will then face China PR on the second match day, before closing out group play against the hosts, Portugal.

Denmark’s Algarve Cup tournament kicks off on February 28 against Group D opponent Iceland. They will then play a rematch of the 2017 EUROs final, taking on the Netherlands on March 2 before closing out group play on March 5 against Japan.

The tournament concludes on March 7 when all placement matches will be played. The rosters for each team is listed below.