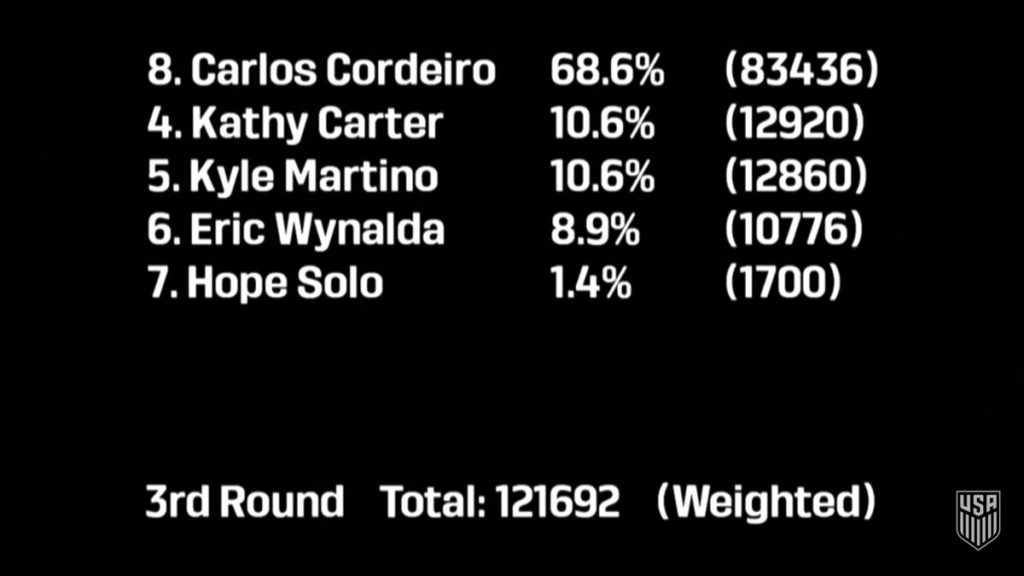 Carlos Cordeiro is the new president of U.S. Soccer, winning Saturday’s hotly contested election on the third ballot. Cordeiro has been vice president under Sunil Gulati who emceed the proceedings but did not seek another term as president. The 61-year old Cordeiro, profiled here in the Miami Herald earlier this month, assumed the new office immediately.

Kathy Carter, president of Soccer United Marketing (SUM), ran close to Cordeiro on the first two ballot but plummeted to 10.6% on the decisive vote with the winner at 68.6%.

“I’m a little overwhelmed,” Cordeiro said upon taking the podium before the standard thank yous to everyone including the other seven candidates. “To those of you who didn’t vote for me, I’m going to work to earn your trust and your support over the next four years. I promise you I’m going to work together with all of you to bring us together as one united soccer community.”

The election became a hot topic after the U.S. men failed to qualify for this year’s World Cup. Gulati ultimately decided not to run for another term and a contentious group of eight emerged. Hope Solo, who used her final speech in front of the delegation to reiterate her stance on inequitable pay and conditions for female players, ran near the bottom on all three ballots. She was sixth on each of the first two ballots and then last of the five who remained on the final ballot.