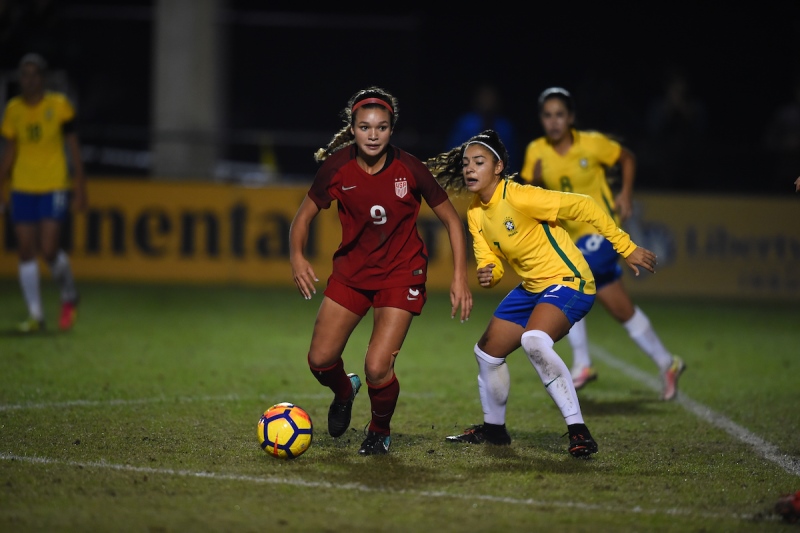 Also in today’s roundup, the England FA addresses Phil Neville controversy, and Christine Sinclair is given a rare honor

And THIS is how you win your group. ?

On to the semis! » https://t.co/aerAIb0nUXpic.twitter.com/oRCs67e7OE

The USWNT U-20 squad continued clipping along in their quest for World Cup qualification at the CONCACAF Championships in Trinidad and Tobago on Tuesday, advancing at the top of their group behind a 2-1 victory against Mexico.

Walking away with three victories and all 9 points in the group stage, they will meet Group A runner-up Haiti in the semifinals of the tournament on Friday at 3pm ET, and the win will earn them a spot at the 2018 U-20 Women’s World Cup in France. The winners of the semifinal matches and the third-place game earn CONCACAF’s three berths.

Our @Lionesses have a new leader. Congratulations, @fizzer18! ?https://t.co/91FZIw28fQ

When the England FA announced Phil Neville’s appointment on Tuesday, it was met with mixed opinions, as well as some consternation due to some unfortunate past tweets from the new Lionesses manager (his account has since been deleted.)

The backlash warranted a response from Neville himself, who said today through an FA spokesperson that “Following comments made a number of years ago, I would like to clarify that they were not and are not a true and genuine reflection of either my character or beliefs, and would like to apologise. I am fully aware of my responsibilities as the England Women’s Head Coach and am immensely proud and honoured to have been given the role. I am now looking forward to the future and will work tirelessly to try and help bring success to the team.”

Neville brings prior coaching experience at Manchester United, Valencia, and England youth national teams to the position, and presented an end to a coaching search put on by the England FA that included candidates like the Utah Royals’ Laura Harvey and new Canadian Men’s National Team head coach John Herdman

Christine Sinclair is honored as Officer to the Order of Canada

Christine Sinclair, long-time leader of both the Portland Thorns and the Canadian Women’s National Team was honored  as Officer to the Order of Canada in Ottowa today, a distinction given to citizens for “achievement and merit of a high degree, especially service to Canada or to humanity at large.”

Citing “her leadership on and off the pitch has made her an inspiration to young athletes across the country”, Sinclair has led the Canada WNT to back-to-back medals in the 2012 and 2016 Olympic Games, and most recently was on the Portland Thorns squad that won the shield in 2016, and took home the 2017 NWSL Championship. She currently sits at #2 on the all-time international scorers list with 169 goals, only behind Abby Wambach’s 184.