Lauletta: Some thoughts on this week’s three-way NWSL blockbuster

PHILADELPHIA — So what do you do when your best and most marketable player tells you they don’t want to play for your team anymore? These scenarios have been handled in any number of ways down through the years, but a unique case confronted the Chicago Red Stars, Houston Dash, and Sky Blue FC this offseason. All three had players that, for reasons that differed slightly from each other, wanted to play somewhere else in 2018. As luck would have it, the teams were able to get together on a trade that has everyone jazzed for new faces and new energy this season. Let’s examine.

Neither Sky Blue nor Sam Kerr have publicly acknowledged it, but several sources have confirmed to The Equalizer that Kerr desired a move out of New Jersey. This is vital information in attempting to analyze the trade from Sky Blue’s perspective. Kerr was the most dominant scorer in NWSL last season, and she thrilled home fans with two of the most sublime individual performances the league, or any league, has ever seen. There was really no fair value within the league that could suffice for losing Kerr.

Carli Lloyd is 35 and has battled different injuries over the last few years. She is also a New Jersey legend who has been scoring big goals in important games for more than a decade. Joining Lloyd is Janine Beckie from the Dash and Jen Hoy from the Red Stars. Beckie is a Canadian international who has shown flashes of becoming a consistent goal scorer. Hoy has been used mostly as a third forward and is an excellent depth player.

Earlier this offseason, Sky Blue acquired Katie Johnson from the Reign, and they drafted Michaela Abam and Imani Dorsey, both of whom were attacking players in college. And don’t forget Shea Groom who was acquired in a trade for Kelley O’Hara. Following a season in which life beyond Sam Kerr often meant life struggling to find goals, there will be no shortage of offensive talent at the disposal of first-year Sky Blue coach Denise Reddy.

Draft picks were also moved in the trade, and Sky Blue acquired No. 6 where they took Amandine Pierre-Louis, a left back to help put the defense back together; at No. 13, Casey Murphy, considered the best keeper in the draft and a Rutgers graduate (Murphy is currently in France until June. Reddy hopes she will join Sky Blue after that.)

There is no denying it. Trading away a 24-year old MVP is a tough sell. At the same time, Kerr spent three seasons with Sky Blue and the club never finished .500 let alone made the playoffs. Considering that and her own request to be moved, it has been a very good few months on the job for Reddy.

New day for the Dash

Christen Press and the Red Stars mutually agreed it was time to part ways. (photo copyright to by Lewis Gettier)

Vera Pauw did not take the Dash job this winter with an eye on trading Carli Lloyd. But as a former player herself Pauw knows well the trails and travails of being a professional athlete living far away from your spouse. So when Lloyd expressed an interest in playing back home in New Jersey, the coach was happy to oblige from a personal standpoint.

“Carli, everybody knows that she wanted to go to New Jersey, that it had nothing to do with the Houston Dash,” Pauw said “I’ve been a player myself, and I’ve coached now for 20 years, and I know that if a player’s heart is with a husband or with a partner somewhere else, it’s really difficult, and especially at her age. She deserves that little bit extra, and that is why we went to the edge to make it happen that she could go to her husband and I’m so happy for her. For us, of course, I had looked forward so much to working with her because to me, she’s the biggest player of the league, even though maybe at the moment another player is performing at a higher level, but with her history in the league and with her history for American soccer, it was such a joy to look forward to working with a player like her. But as I said, I know how it feels. I’ve been in South Africa two years away from my husband; I know how it feels if you cannot be with the one you love. So that is why we went very far to make that happen for her.”

Pauw and the Dash may have gone to the edge in a deal that was literally still being configured into the overnight hours before the draft, but the return is nothing to sneeze at. In exchange for Lloyd, Janine Beckie, and the 6th and 24th picks, the Dash acquired Christen Press from the Chicago Red Stars. Press has not scored goals of the same global impact as Lloyd but she is one of the most technically gifted players in the world with an ability to score from almost anywhere in the attacking third. Pauw told the Houston Chronicle that Press will be the first player on the team sheet every week.

“That is like a dream come true for a coach, because she will be the face of the team,” Pauw added. “With Christen Press, we know that we have scoring abilities. She will score goals, and it’s my task to build the team around it so that she gets in the position to score goals – not only her, but that it balances in a way to where she helps other players and that we get a really strong driving force behind our attack. But you need a player to lead the attack. She’s humble, but on the pitch she has the character to lead the attack, and that is why we have chosen to go after her.”

Press will become the focal point of the Dash attack, but whether or not that attack can help turn around a club that has never been to the playoffs is another question entirely. Not much has gone right for the Dash the last two seasons, and what Pauw does behind Press will be the key as to whether this deal is the beginning of something or not.

In two pre-draft trades the Dash lost Andressinha to the Thorns and the right to draft Rebecca Quinn at No. 3 overall. That leaves them desperately thin at central midfield. Kristie Mewis is more of a wide player and No. 7 pick Haley Hanson could help with that, but they need more. Defensively, the rebirth of Amber Brooks as a center back was a revelation last year and Jane Campbell figures to keep getting better in goal, but the Dash need to be quite a bit more stingy to make the elusive jump into the top four.

Can Kerr get the Red Stars over the top? 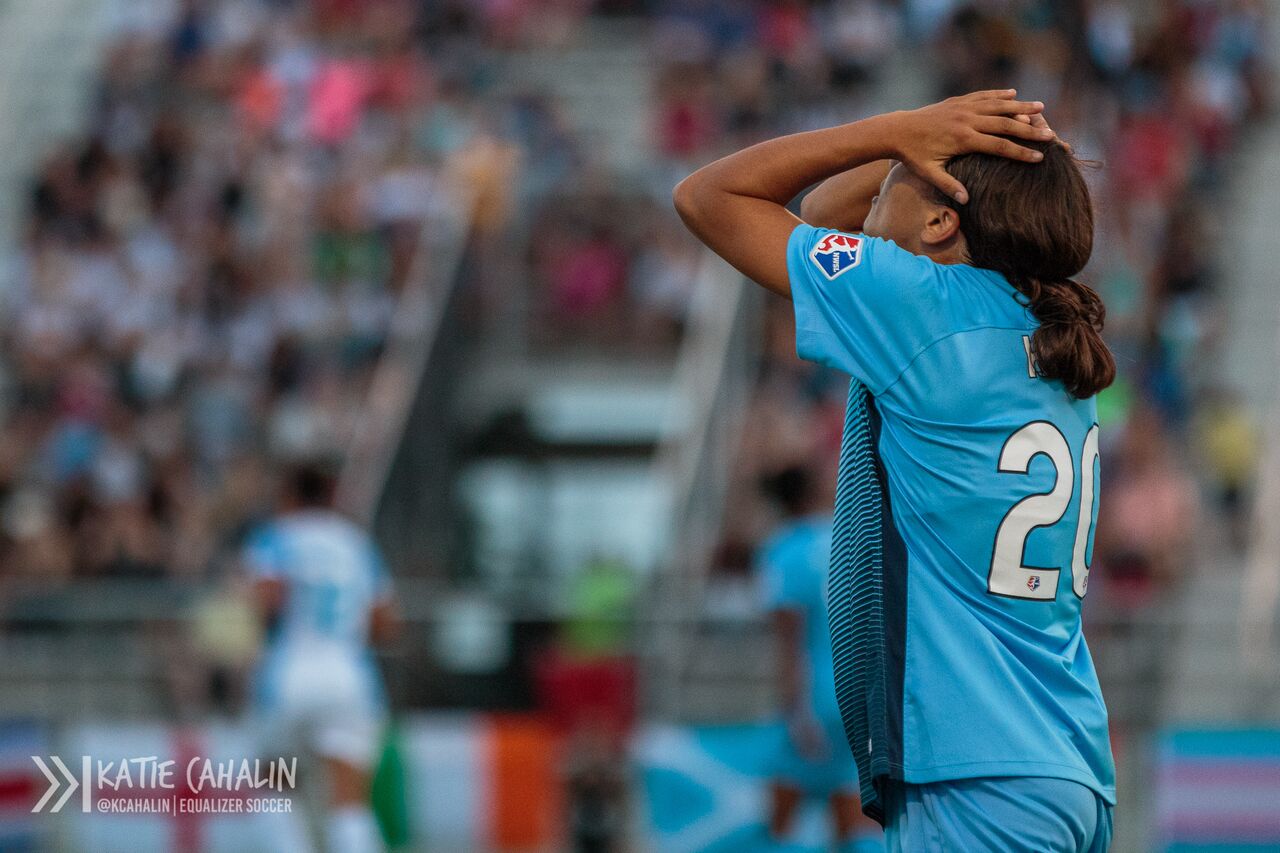 Sam Kerr is heading to Chicago. (photo copyright Katie Cahalin for The Equalizer)

As Rory Dames told John Halloran on Thursday, after three seasons reaching the semifinals and no farther, it was time for a change. The coach knew it. And Christen Press knew it.

So out went Press and Jen Hoy. In came Sam Kerr and Nikki Stanton. And Rory Dames was able to simultaneously shake up his club, send a player elsewhere who no longer wanted to be a Red Star, and keep his core intact.

The Red Stars have a chance to be the biggest winners from this trade for a few reasons, not the least of which is that I believe Kerr is the best player who changed hands. They were also a far better team than the other two before the trade, and adding Kerr and some midfield depth with Stanton could wind up being among the final pieces to the puzzle.

Kerr isn’t likely to be quite as dynamic as she was in 2017, and she may not win the Red Stars games single-handedly with warp-speed hat tricks. But then again, maybe she won’t have to.