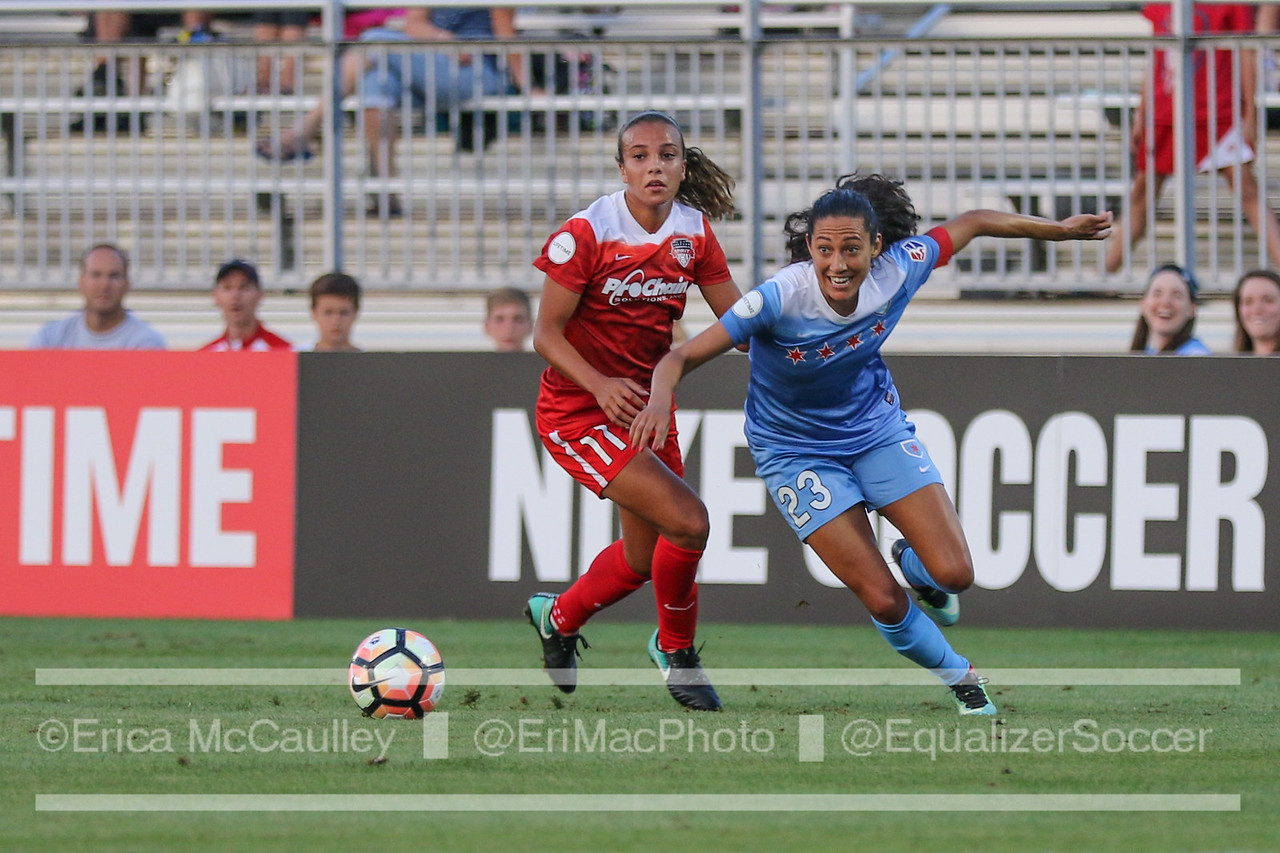 Christen Press, right,
and Rory Dames can to a mutual agreement that their player/coach relationship had run its course (photo copyright EriMac Photo for The Equalizer)

PHILADELPHIA – Over the years, the Chicago Red Stars have developed a reputation for dominating the NWSL draft and, surely, the 2018 edition will go down as no exception.

The Red Stars took part in the biggest news of the day, engaging in a three-way trade with the Houston Dash and Sky Blue FC that sent Christen Press to Houston, Carli Lloyd, Janine Beckie, and Jen Hoy to New Jersey, and brought Sam Kerr and Nikki Stanton to Chicago. Several draft picks change hands.

“Sam Kerr has been one of the best strikers in the world over the last 12-18 months,” explained Red Stars’ head coach Rory Dames. “Anybody who has a chance to get Sam would be excited to have her.

Of course, many Chicago fans will be sorry to see Press leave, but Dames said the decision was mutual and praised his now former captain for her contributions over the past few seasons.

“Christen and I together had run our course. We’re both disappointed we didn’t accomplish what we set out to do. Christen put every bit as much of sweat, blood, emotion, and commitment into it as I did. Christen was phenomenal for us—raised the standards on and off the field [and was an] unbelievable role model the last few years for that young core,” he added.

“For three years she did everything we asked her to do.”

The coach also indicated that the team is looking to make even more moves ahead of next season and that after losing in the semifinal round of the playoffs the last three seasons in a row, the time had come to shake things up.

In terms of actual draft picks, Chicago ended up with six selections on the day, including three players whom many predicted would go in the first round, including goalkeeper Emily Boyd, center back Indigo Gibson, and midfielder Brianna Visalli.

“We’ve had the same core for three years and we’ve stayed pretty loyal to them,” said Dames. “And we’ve gotten to a certain point and we haven’t been able to get past it. I think we have a good reputation as being loyal and developing our own and bringing [players] through the draft, but it’s time to shake it up a bit. It’s time to bring in some new, young blood.

“Just to see how excited those [players] who were here today—and all of them are really good players—it will bring a whole different energy to the group and that’s what we need.”

Dames expressed surprise that all three players were available and thinks his new players can help create a renewed sense of competitiveness in his squad.

“We’ve battled to where we’ve gotten to two, three times in a row keeping it a warm, fuzzy ‘this is our group, we’re going to be loyal’ and now we’ve got to find that next group.”

He also explained that he has high expectations for Boyd and thinks she can push current goalkeepers Alyssa Naeher and Michele Dalton.

“Michele’s been a good soldier for us and has shown her worth at this level, but I would say that it’s gotten complacent over the last two years. For both of them, for Alyssa too,” said Dames. “To bring in a young, upcoming keeper who is exciting, has energy, who wants to prove herself—it reignites everybody.”