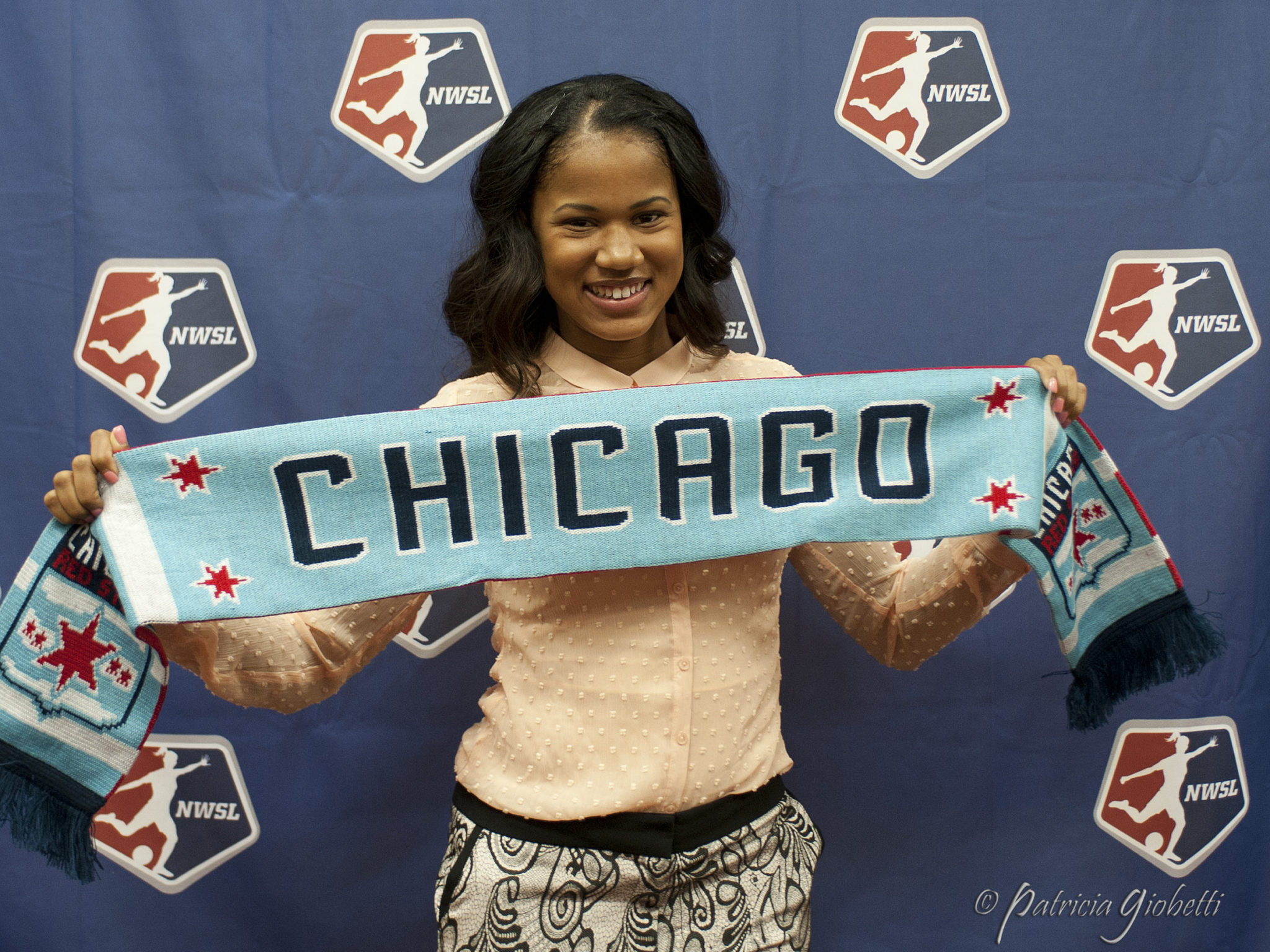 Throughout my life watching sports, I have been beholden to the notion that you can’t make a truly, solid judgment on anything until five years have passed. Hot takes are fine, of course—some have already come to unbendable conclusions about who won the Crystal Dunn trade—but in reality it takes time, space and context. Of course since adding women’s soccer to my list of sports to follow, this five-year rule has been something of a problem, that being that by the time five years had passed on anything, whatever pro league it happened in was no longer in operation. But fast forward to today, and it is now five years since the inaugural NWSL college draft. Here is a look back.

The date was January 18, 2013—five years to the day before the 2018 Draft—and the site was Indianapolis. Not many media made the trip for the sole purpose of covering the draft, and I was among those who stayed home. If you have attended a recent draft or seen photos, contrast it against this. There were no fans, no players and the media were sealed off in a separate room, left to see the selections via social media like everyone else.

The draft order was determined based on the perceived strength of the clubs following initial allocations of seven players from the three participating federations—U.S. Soccer, the Canadian Soccer Association and the Federation of Mexican Football. The order was the same for every round. No picks were traded.

Here is how the teams fared:

The Red Stars surprised many by passing up on Kristie Mewis, widely regarded as the best player in the draft. But in going with Bywaters, Rory Dames established a precedent of leaning toward regional players, a philosophy that has both served him well and still stands today. And while Mewis was clearly the better player out of the chute, you could argue that Bywaters was closing the gap before a hip injury put a premature ending to her playing career. She was last heard from in 2016 when she left Red Stars preseason and sent out a barrage of  incendiary tweets aimed at the coaching staff. The club has never commented.

As for the deeper picks, Quon was an emerging outside back who entered an agreement to join the Canadian national team and was even subsidized for two seasons before her career came to an abrupt end. Vancil showed promise as a solid shot stopper in goal but after two seasons as a backup, became one of the league’s early early retirees. Hoy at No. 25 is one of the all-time draft lands. In 2014 she set the Red Stars record by scoring in four consecutive games and is set to enter her sixth season with the club in 2018.

Not much went right for the Spirit in 2013, and the draft was no exception. They, too, passed on Mewis and went with local product Tiffany McCarty. She appeared in all but one match and totaled better than 1,200 minutes but scored only two goals. When the Dash were announced as an expansion team in the fall, the Spirit left McCarty unprotected and she went to Houston and later Kansas City. She currently plays in Norway.

Second round pick Caroline Miller and fourth round pick Colleen Williams were both beset by injuries. Williams retired after tearing her ACL in 2013. Miller fought back to make two appearances for the club in 2015 before being waived. Third round pick Holly King never appeared in an NWSL match.

Five years later maybe the most surprising thing about the draft is that FC Kansas City picked third. Their American allocations were Nicole Barnhart, Lauren Cheney (soon to be Holiday) and Becky Sauerbrunn. Their Canadians were Desiree Scott and Lauren Sesselmann, and Mexican allocation Renae Cuellar scored the first goal in league history. Then lo and behold, the two teams above them failed to snatch up Mewis. In the next round they nabbed Erika Tymrak, who wound up as Rookie of the Year and earned herself a call-up to the national team.

With Mewis and Tymrak, FC Kansas City became the toast of the league. Tymrak in particular appeared to work off the same soccer brain as Holiday, and FC Kansas City came within a last-second goal (by Red Stars pick Hoy) of winning the Shield. But the true value of drafting Mewis came in the offseason when she was traded to Seattle (later flipped to the Breakers) for Amy Rodriguez. In two full seasons with FC Kansas City, Rodriguez scored all three of the club’s goals in back-to-back NWSL Championship wins.

That third-round pick Whitney Berry never made it or that fourth rounder Nia Williams was a marginal contributor pales in comparison to the success the club found through Mewis and Tymrak, the latter of whom remains on the roster of the Utah Royals. Williams is the daughter of then-general manager Huw Williams, who called the sight of his daughter subbing into her first NWSL match (May 18, 2013 against the Breakers) a highlight of his career.

Jim Gabarra has never been shy about pulling a few surprises on draft day, and the selection of Lindsi Lisonbee-Cutshall, who played under Lindsi Cutshall, was certainly one of them. His vision was to groom Cutshall as the partner and eventual successor to Christie Pearce at center back. The plan might have worked, too, had Cutshall been able to remain healthy. And for a stretch after the 2015 World Cup, the Pearce-Cutshall combo was a challenge to get past. That offseason Cutshall announced she was taking the season off to rest her body. She has since had a child and, while she has been a regular visitor to Yurcak Field the last two seasons, there is no evidence she intends to continue her career.

Second-round pick Kendall Johnson started every game for the club, mostly at left back, the only season to date that Sky Blue has qualified for the NWSL playoffs. She eventually made her way to Portland where, after sitting out the 2016 season, she returned to play a small role on the 2017 NWSL Championship side. Fourth round pick Becky Kaplan never played.

Third-round pick Ashley Baker has only one official minute of NWSL play, but it was a memorable one. On June 1, 2013, with Sky Blue leading the Breakers, 5-1, Gabarra used his final sub to put Baker in goal for Brittany Cameron in the 90th minute. No sooner had she been in the game than the Breakers won a penalty. Facing the prospect of a 90.00 goals against average, Baker made a save on Lianne Sanderson’s spot kick to put a nice bow on her singular appearance in the NWSL.

This was another interesting point in the draft. All eight teams had been allocated goalkeepers, but two of them were Mexicans with little experience. One of them, Cecelia Santiago, was only 18 at the time. Adrianna Franch loomed as a blue-chip prospect, but the Breakers passed on Franch to select Casey Short.

The tragic tale of the Short pick is that she tore her ACL before the season began and then got hurt again in 2014 before playing a year in Norway followed by a triumphant return in Chicago where she has established herself as one of the best fullbacks in the league and been capped by the national team. There is no telling what kind of player Short may have been for the Breakers.

But in passing on Franch, the Breakers left themselves in keeper limbo for most of the season until they were able to sign Alyssa Naeher to come home from Germany. Head coach Lisa Cole never seemed comfortable using Santiago, and Ashley Phillips was an average alternative.

The other three picks at least suited up for the Breakers. Evans became a feisty, lunch pail-type midfielder who wound up eventually going to the Pride in the 2016 expansion draft. Nogueira eventually became Mariah Bullock and was part of both Shield teams in Seattle the next two seasons. Dragotta appeared in 10 games for the Breakers.

After the Breakers passed up on Franch, the Flash happily picked her at No. 6. All she did for them was start every match on the way to the NWSL Shield and a berth in the NWSL Championship. Unfortunately, that was the end of the Adrianna Franch era in Western New York. She tore her ACL on the first day of preseason 2014 and left for Europe the next season, returning to help the Thorns to their two most recent trophies. But for one glorious season, the young rookie keeper selected in the first round was worth her weight in gold.

Amy Barczuk was a backup midfielder who wound up starting both playoff matches but never rose to become a regular starter. DiMartino was considered a steal at No. 22 but contributed little and was out of the league a year later. Jackie Logue never played a match in NWSL.

The Flash are remembered for a legacy of championships, but before Charlie Naimo arrived to cultivate the now famous 2015 draft class, the Flash draft history is quite dodgy outside Franch and obvious WPS No. 1 overall Alex Morgan in 2011.

Laura Harvey is quick to acknowledge that she was in over her head for her debut draft in America. But she didn’t do all that badly. Nairn was one of the few bright spots on the Reign’s less-than-memorable 2013 club. More importantly, she was later traded to the Washington Spirit for the rights to Kim Little, the most important part of the insta-rebuild that led to consecutive Shields. Nairn has since been reacquired by the Reign.

Kopmeyer was more or less not part of the official roster out of the blocks, but because Hope Solo was injured, Kopmeyer was extra keeper. Though she was waived at one point, she stuck around and rose to No. 2 behind Solo, filling in adequately during Solo’s national team forays through the years. At one point, across two seasons, she went 12 straight decisions without a loss, one shy of Solo’s club record. She remains with the Reign today.

Kristin Meier played only six matches for the club, which totals six more than Mallory Shaffer.

Like the Flash, who the Thorns vanquished to win the inaugural NWSL Championship, their first round pick paid immediate and extraordinary dividends. Kathryn Williamson had a dodgy opening few minutes when she was beat for Cuellar’s debut goal three minutes into the league’s existence, but she settled in to start every match for the Thorns at center back. Her play helped the Thorns win the league’s first title even though Williamson was sent off in the final. Despite a strong debut season, she struggled for an encore after being traded, ironically enough, to Western New York and then back to Portland before retiring.

Brooks was a stretch pick after announcing she was going to play in Germany. She did play for the Thorns in 2014 and was then traded to the Flash for a package that included—guess who?—Kathryn Williamson. She is now in Houston where a move to center back has revitalized her career.

Radovcic and Barker never played in the NWSL, but Barker has been the first choice keeper for South Africa.