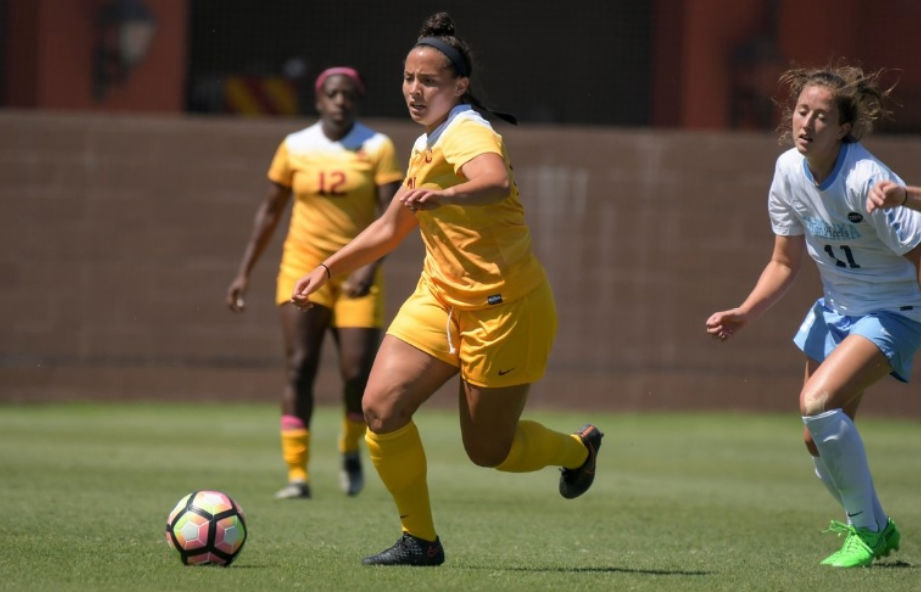 USC's Alex Anthony could hear her name called in the back half of tomorrow's NWSL Draft. (photo courtesy USC Women's Soccer Twitter)

Although the buzz surrounding the draft tends to focus on the first round, it’s possible in the second half of the proceedings to snatch a player who is capable of sticking around and contributing. Here’s a look at a couple of players that fit such a billing in this year’s NWSL draft.

Anthony managed double-digit goal totals in two completely different conferences – the PAC-12 and the Big Ten, where she played at Maryland prior to transferring to USC. That’s a pretty impressive feat for any forward. She’s a strong, physical forward with a powerful shot. She’s also capable of holding up the ball. She might not be the style of forward that many teams prefer, but she’s got a résumé that should earn her a shot somewhere.

Kiehl scored 45 goals and 21 assists in four seasons as a Flyer. It’s true that the A-10 doesn’t generally produce NWSL-level talent, but the forward could be one of the 40 drafted tomorrow. Part of Kiehl’s upside is that she’s converted over 20 percent of her non-penalty shots in each of the last two seasons. Obviously, it will be interesting to see what those numbers look against higher caliber defenses, but it’s a calculated risk that a team may be willing to take in a late round, especially considering the lack of depth in this draft class.

A defensive midfielder with a high work rate, Callahan could be a late pickup for a team looking for depth at the position. A three-year starter with the Golden Knights, Callahan has also seen time at center back, although at 5 feet 5 inches, her future is most likely in the center the pitch. However, she will have to do some work on her passing in order to have a chance to find a permanent home with a team.

A player who started all but a handful of games in her career as a Bulldog, Hudson may hear her name called in the second half of Thursday’s draft. A two-time All-Ivy League selection, Hudson is good in the air and reads the game well. Although the Ivy League isn’t one of the major conferences as far as women’s soccer goes, it has punched above its weight when it comes to NWSL. Perhaps Hudson can add her name to a considerable list of NWSL players that once plied their trade in the Ivies.

Everyone knows, Chicago Red Stars head coach Rory Dames has a history of selecting players later in the draft that he’s familiar with and have local ties. Ben played for both Rory Dames’ Eclipse club as well as the Red Stars Reserves side. That makes the 5-foot-tall creative and technical midfielder the perfect target for one of the Red Stars’ picks in the second half of the draft.