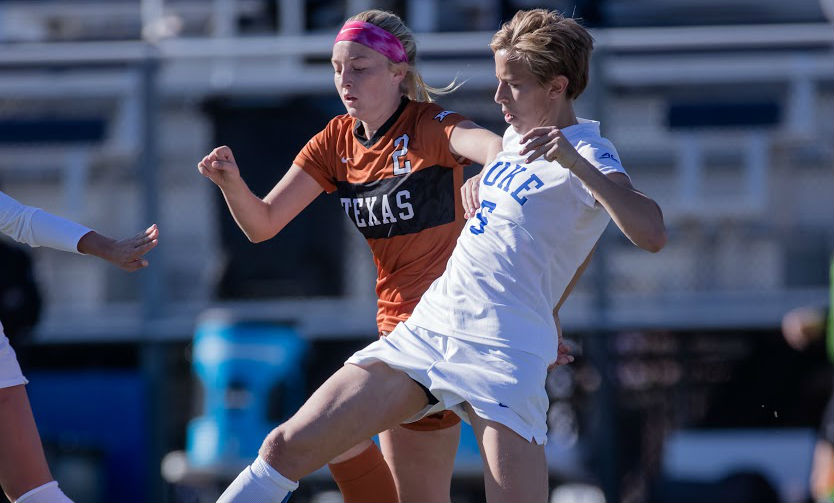 Rebecca Quinn, right, is projected by many to be a first-round draft pick. (photo by Shane Lardinois)

With little player movement in the form of trades (there’s almost been more movement in relation to coaches than actual players) and the fate of the top prospect Andi Sullivan undetermined, the 2018 NWSL draft is shaping up to something of an enigma. Certainly, Sullivan’s future plans should be known before Thursday but at present, it’s difficult to examine the cipher that is the draft without its key.

Undoubtedly Washington, Sky Blue, and Portland, who each hold two picks in the first round, will garner significant attention on Thursday.  Washington, along with Chicago, holds the most picks of any team, so what each of these clubs choose to do with their selections may also be a focus on the day.

Another point of inquiry will be how newly-minted NWSL head coaches Denise Reddy of Sky Blue and Vera Pauw of the Houston Dash handle their first draft at the helm of their respective teams. The draft offers a chance not only to influence inherited rosters, but also provides insight into each coach’s philosophy and stylistic preferences.

While there’s still a lot to shake out between now and Thursday here are some names fans should expect to hear in Philadelphia this week.

Easily the deepest position in the draft, parsing down the list to a top three was a difficult task. Certainly, cousins Lauren Clem and Caitlyn Clem, who’ve helped make the name synonymous with solid keeping in the Big Ten, are worthy of a chance at the professional level. Until either the number of teams or roster sizes expand, it’s difficult to imagine more than a couple of keepers coming off the board barring some unannounced retirements or trades.

One of the keepers at near the top of everyone’s list is Emily Boyd. Boyd’s got solid footwork and is rarely caught out of position. She elevated her game in the last several years by dedicating herself to a more healthy lifestyle, something that’s not always a major focus of young goalkeepers. She also has 36 career shutouts while often facing the best attacking talent in the collegiate game in the PAC-12.

Some may quibble with this selection, citing her size as a deterrent, but Duke product E.J. Proctor has more than proven her worth during Duke’s spectacular NCAA runs the past three years. Proctor is an excellent shot stopper and has incredible reflexes. She’s also quick to come off her line, a trait that generally works out to her advantage.

Rounding out the top of this list is Florida State’s Cassie Miller. She’s not a flashy keeper but a consistent, solid presence in net. Her organizing ability and vocalness are also strengths.  In her first season, Miller transitioned into the role formerly held by Kelsey Wys and helped the Seminoles win their first national title. Could Miller now join Wys in the NWSL ranks?

Defenders are a need for a lot of teams heading into the 2018 season. If clubs with porous backlines are looking to bolster their defensive corps through the draft, here are a few names they will likely get write down on Thursday.

Indigo Gibson, also a former Cal Bear, is likely to come off the board early. She’s a modern style center back who can to help build out of the back. She has also played the middle back in a three-back system previously, which is the most demanding defensive position in the modern game.

Taylor Isom, meanwhile, is a central defender who hangs her hat on her one-v-one defending.  The 2016 All-American, unfortunately, suffered two tears in her right ACL, which will impact her draft stock along with the fact the BYU had an atypically poor season this fall.

Duke’s Schuyler Debree is another defender who should get the nod on draft day. DeBree’s composure at the back was critical to Duke’s run to the College Cup this past season. Although she won the 2017 ACC Defender of Year playing center back, she’s also got experience playing outside back which should increase her stock. A downside to her game would be her ability in the air as she’s not one to serve as a target on set pieces, but this shouldn’t scare away too many suitors.

Another in a long line of Monroe College studs to make the Division I ranks and impress, could Kathellen Sousa be the first to make a successful transition to NWSL?  The reigning American Athletic Conference defender of the year, Sousa is strong, great in the air and has exceptionally long legs, which should help her cover ground quickly if the need arises. The Brazilian has also proven she can play defensive midfield if needed. She does have a couple of red flags, though. The first is that she only spent a year at UCF, and the second that she’ll require an international spot.

Long, if understandably so, in the shadows of Kadeisha Buchanan, Amandine Pierre-Louis finally received the attention she deserved for being one of best defenders in the Big 12. Strong, physical and fast, “Z” (as she’s affectionally known by her teammates) is a force to be reckoned with on the flank. She also managed 14 goals and 12 assists in her career, which isn’t a shabby total for an outside back. Her attributes also lend themselves to playing elsewhere on the flank. Pierre-Louis did suffer an injury in the second round of the NCAA tournament last fall, so her availability to play in the upcoming season is unclear.

How the midfield prospects shake out in Thursday’s draft will depend heavily on the biggest question hanging over the upcoming proceedings. With Andi Sullivan and Rachel Corboz currently missing from the list of declarees, there’s much left undetermined. In this positional rankings, we assume Sullivan has declared (living dangerously, right?).  If she does, the two prospects at the top of the board in this position are going to have the most impact short-term and potentially long-term impact on their new homes of any of the potential draftees.

At the top is the much-lauded Sullivan, whose high soccer IQ and smooth touch on the ball has won her praise well before she arrived in Palo Alto. Her skill set and her maturity on and off the pitch make her a real game and possible club changer. If she enters her name, she’ll add No. 1 overall draft pick to her ever-increasing list of accolades.

Sullivan’s Canadian counterpart, Rebecca Quinn, will be another player quickly taken off the list. As a player who will be a key component in Canada’s future, it seems likely the Duke graduate will be allocated. The easiest way to see the impact she has on the field is to remove her. While she was away on international duty, Duke struggled to put it together against North Carolina in the ACC tournament championship. She’s calm on the ball and great at setting tempo, and Quinn was an essential element of the Blue Devils’ late runs the last three seasons.

From a talent perspective, Florida’s Gabby Seiler should be another player that hears her name early Thursday. Her decision to suit up for the Gators’ basketball team could give teams pause as its unclear when she’d be immediately available. Nonetheless, her ability when dribbling at opponents and her calming presence when on the defensive end of a play make her a target for many squads. Her versatility is a key asset and although she can also play at the back, attacking midfielder is by far her most promising position.

It’s not too often a sixth year senior emerge as a potential top draft selection, but Sandra Yu has a great technical platform and proficiency at helping to set up those further upfield, giving her this distinction despite the injuries that plagued her first two seasons in South Bend.

Like Yu, Joanna Boyles’ career as a Tar Heel was unfortunately hampered by injuries, but the first-rate free kick specialist returned to the pitch for North Carolina following two ACL tears in tremendous fashion. While it’s her ability to strike a ball with precision that draws attention, she also serves as a more-than-capable distributor.

If one thing is certain in this group of forwards, it’s that South Carolina’s  Savannah McCaskill will be the first forward off the board. While the tenacious and gritty player is known as a goal scorer, she’s also able to play the role of provider, netting nearly as many assists (34) as goals (40) in her college career. She’s fast and incredibly hard to slow down when dribbling at full speed. The four-time All-SEC first-team selection has typically played in the center of the park, but her skill set also leaves up the possibility of playing on the flanks.

Imani Dorsey had a stellar senior campaign and increased her stock considerably in the process. She doubled her greatest single-season goal output this past season tallying 14 times. She’s got the speed to beat teams on the counter and can strike with either foot. The biggest downside for the Duke product is her decision-making. At times, she seems hesitant to pull the trigger, which could cause issues at the next level.

Michaela Abam is an athletic, powerful forward who was the crux of the West Virginia offense for much of her Mountaineer career. Her efficiency numbers are not ideal, but her tenacity when defending may make sure an asset for a team seeking to use high pressure and counter approach. She also saw time as an outside back in the U.S. youth national system, so it’s possible her future may include playing elsewhere on the pitch.

Bri Visalli exploded for 14 goals this past fall, far more than her first three seasons as a Wave, earning All-American and WCC Player of Year honors in the process. What Visalli lacks in size she makes up for in technical ability. The crafty Pepperdine product is superb in tight spaces and dribbling at defenders.

UCF’s Morgan Ferrara had a stellar senior campaign netting 13 goals. While that’s certainly a sizable number, what’s more impressive is that she converted 26.8%  percent of her non-penalty shots this season. The 5’10″ center forward doesn’t have a ton of pace, but she’s deadly inside the box.