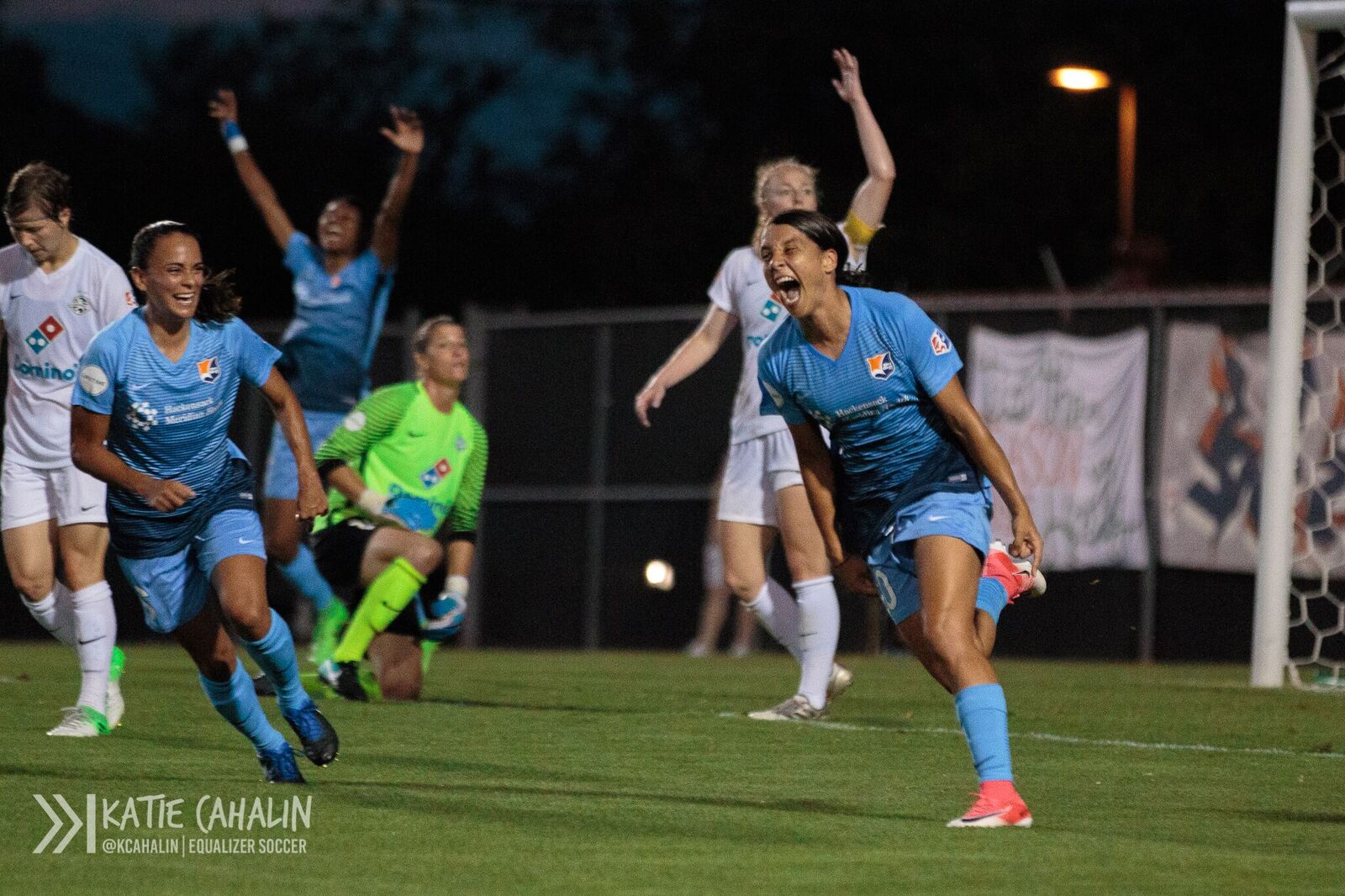 Sam Kerr was a force to be reckoned with at both the club and international levels in 2017. (photo copyright Katie Cahalin for The Equalizer)

When the clock strikes midnight tonight and the ball drops in Times Square, it will officially be the end of 2017, or the Year of Sam Kerr as woso fans know it.

No player had a year quite like Sam Kerr did, and, even more impressively, she did it on more than one continent. The Australian striker started the year the same way she’s ending it, playing for her hometown team, Perth Glory, in the W-League. Her 10 goals on the season were second most in the league and helped Perth end the regular season atop the table.

Perth advanced to the Grand Final where it ultimately fell to defending champions Melbourne City, 2-0. Despite the loss, Kerr was still honored with the Julie Dolan Medal, the award for the most valuable player in the 2016-2017 W-League season.

Kerr then returned to New Jersey, where a quiet start with Sky Blue FC, her NWSL home for the past three seasons, proved to be the calm before the goal-scoring, recording-breaking storm.

Kerr’s 17 goals on the season, none of which were from the penalty spot, earned her the league’s Most Valuable Player and Golden Boot accolades while breaking the NWSL single-season goal record. She finished the 2017 NWSL season with 43 career goals, breaking Jessica McDonald’s record set earlier in the year.

She also became the first player in league history to score multiple hat tricks in a single season. The first of those hat tricks, scored in the final 12 minutes of Sky Blue’s 3-2 comeback win over FC Kansas City on July 18, was the second fastest hat trick scored in league history. Her four-goal performance against the Seattle Reign on August 19 marked the first time a player scored four goals in a single match in the NWSL.

For her 2017 performance in the NWSL, she was named Player of the Month twice, Player of the Week three times, and a member of the Team of the Month four consecutive months. She was also named to the league’s Best XI at the end of the regular season.

Internationally Kerr was just as dominant as she was at the club level. In the Tournament of Nations, she was an integral part of the Australian attack that secured their first ever win over the United States. She then scored her first ever international hat trick in the Matilda’s 4-2 win over Japan before scoring a goal in Australia’s 6-2 win over Brazil to be crowned tournament champions. Her 11 goals in six consecutive matches marked the first time a Matilda scored in six back-to-back performances.

Unsurprisingly, Kerr was one of 10 nominees for The Best FIFA Player of 2017 award, becoming the first Australian shortlisted for the highest honor in professional soccer. Although that award went to the Netherlands’ Lieke Martens, Kerr did finish out the year by winning the 2017 Asian Football Confederation Women’s Player of the Year award.

All in all, Kerr scored 39 goals for club and country in 2017 and added a plethora of awards, titles, and records to her mantle. If this was the year Kerr had this year, one can only imagine what she has in store for 2018.