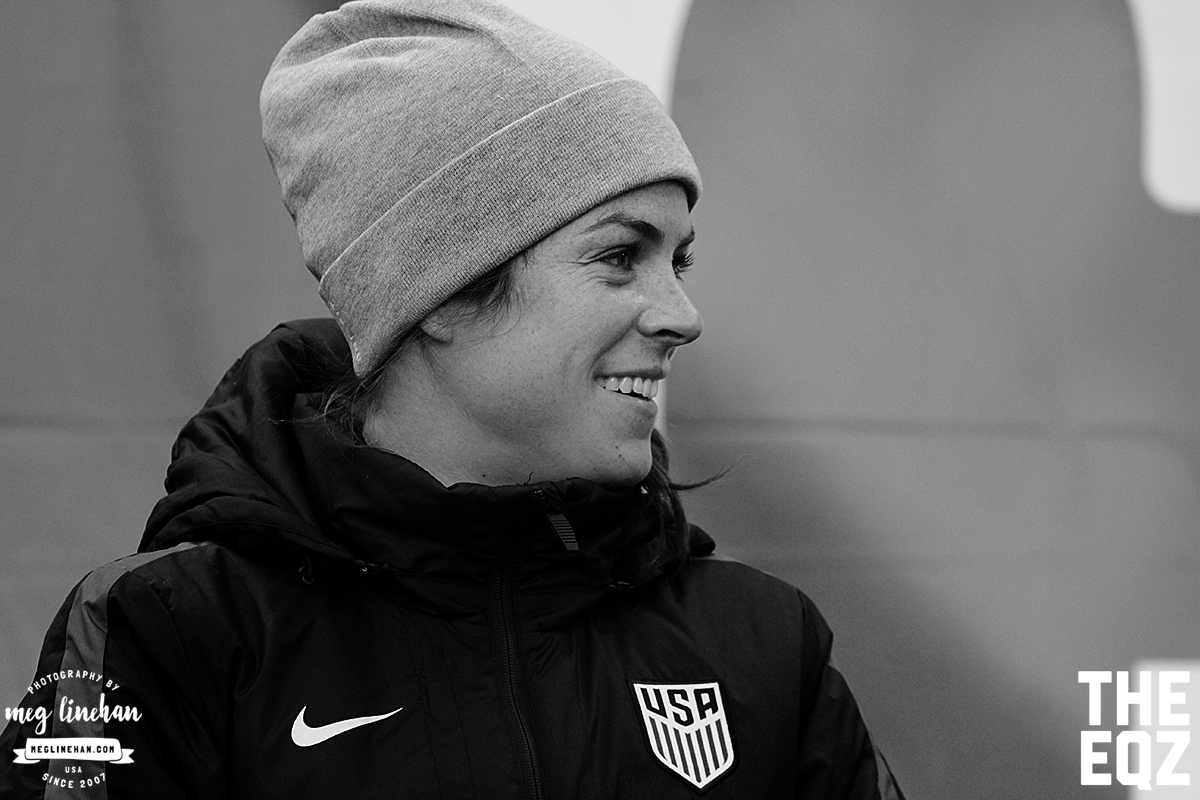 After more than two months of mostly silence, the NWSL’s offseason trade market opened with an explosive deal centered around Kelley O’Hara. The long-time Sky Blue fixture was traded to Utah Royals FC with Taylor Lytle and the No. 25 pick in the draft in exchange for Shea Groom, Christina Gibbons, and the No. 4 pick. Sky Blue now own the No. 4 and No. 5 pick. It’s the age of hot takes so Dan Lauletta and Allison Lee offer theirs in the first deal of the season.

Q: What is your hottest take on the trade?

Dan: My hottest take is that it could be a very good move for both teams. It is an identity-changer for Sky Blue to lose O’Hara, but I feel that Gibbons and Groom can be long-term starters on a solid team and the No. 4 pick should be another player of excellent quality. For the Royals, it was probably always going to be best to shake things up just a bit and in O’Hara they acquired one of the most solid, under-the-radar players in NWSL. Yes, I said under-the-radar. For as great as O’Hara’s following is around the country I always felt like her NWSL play has gone largely unnoticed. Lytle is a spare part but will be an asset if properly utilized and gets to play a ton closer to home.

Allison: I don’t think there’s much argument that Utah getting O’Hara was a great move for the new club, but I also think this trade was a smart move by Sky Blue. While O’Hara is one of the most popular players on the roster, I think she’s more expendable than, say, Sam Kerr, and therefore easier to replace. While both O’Hara and Lytle were the last two founding members of the team’s NWSL roster (assuming Christie Pearce is, in fact, retired), that roster has struggled since making the playoffs that first season. Denise Reddy now has two solid, proven players in Groom and Gibbons who, in my opinion, definitely equal O’Hara’s worth. Gibbons is also ripe with potential after a rookie season in which she should have had a bigger part in the Rookie of the Year conversation. Ultimately I think whichever player Reddy takes with the No. 4 pick will determine whether Sky Blue or Utah got the better of this trade.

Q: Will O’Hara fit into what Laura Harvey likes to do?

Allison: I think so. When Harvey was in Seattle, she waxed poetic about the versatility of Merritt Mathias and how beneficial a player like her was for the Reign, and O’Hara is arguably the most versatile player in the league. Harvey likes having a box-to-box player who is equally threatening on either side of the ball, and in O’Hara she gets just that. I think a coach of Harvey’s caliber will also be able to really tap into O’Hara’s talents and utilize it in the best possible way for the Royals. It will be interesting to see whether Harvey plays her as a fullback or as a winger, but I honestly think O’Hara could flourish under Harvey’s tutelage.

Dan:  Really is there a team that O’Hara wouldn’t fit on? She is a dynamic attacker who for all the time she spends in advanced positions rarely gets exposed in the back. If she plays left back and the rest of the Royals back line (Brittany Kolmel, Becky Sauerbrunn, Yael Averbuch) returns they can challenge the Thorns for the best defensive unit in NWSL. And I do lean toward her playing as a fullback because Harvey prefers the interchangeable, three-woman midfield and I don’t think that suits O’Hara’s game the best. Overall there is too much up in the air about the roster including the health and desire of Amy Rodriguez to make any detailed analysis of O’Hara’s role but good players tend to find their footing for good coaches. I think O’Hara is the least concerning element of this trade.

Q: Let’s talk about the No. 4 pick. What kind of player can Sky Blue hope to get in that spot?

Dan: I’m not the person to start analyzing the draft much beyond Andi Sullivan so I defer here. I will make two points though. One is that unless something else is in the works, Denise Reddy is making a statement by piggybacking the 4th and 5th picks that she believes there are impact players to be had. And when you trade into the top four this late in the game it is usually with an eye on one or two specific players. My other point is that at some point Sky Blue need to stop relying so heavily on younger players. Yes their 2016 draft class was excellent, and Kailen Sheridan was a steal as a subsidized 3rd round pick last year. But last year’s first rounders Kayla Mills and Mandy Freeman have work to do and moving O’Hara and Lytle for two younger players and a high pick is another move in the direction of youth. We can’t hold Reddy responsible for the way her predecessor built the club but at some point all these draft picks are going to have to turn into some playoff games.

Allison: This year’s draft isn’t as deep as last year’s was, so Sky Blue getting a first round pick where they can get a player who can really be an asset to the team is crucial to this trade balancing out. There are a number of quality players who, if they declare for the draft as we’re expecting them to, could be huge assets to Reddy’s rebuilding of Sky Blue. Players like West Virginia’s Michaela Abam, UCLA’s Mackenzie Cerda, or Florida’s Gabby Seiler, all of whom have already declared for the draft, could bring a spark of life to Sky Blue, especially as they all have the versatility that NWSL coaches love. The problem with that is, as Dan alluded, not all first-round draft picks pan out to be top-level professionals, so any draft pick, no matter how high in the order, is a bit of a gamble. In that regard, is Reddy crazy enough to trade one or both of those draft picks for a more experienced player whose worth at the professional level she knows she’s getting? I think it’s unlikely but not the worst idea in the world either.

Q: Shea Groom has a bit of a checkered history with different players around the league. In her last visit to New Jersey she was sent off for slapping Erica Skroski. Will this  be a problem?

Allison: I think fans tend to hold grudges over incidents like that longer than players themselves do, so I don’t think so at all. Both Skroski and Groom are professionals, and I don’t see either of them letting any lingering bad blood negatively affect the team’s on- or off-field chemistry. Even teammates have times where one will challenge another a little too strongly in training, and although emotions and tension may run high initially, they move past it for the greater good of the team. I don’t think it will be any different here.

Dan:  Doubtful. Groom is the prototypical player that you love if she is on your team and hate if she is on the other team. She did tend to have more run-ins with Reign players–notably Merritt Mathias and Lauren Barnes–so it’s possible that Harvey wasn’t crazy about joining forces. But at the end of the day, it’s soccer and Shea Groom is a heck of a soccer player with a bright future. If it pans out that she plays up top with Sam Kerr, their skills will be fascinating to watch in tandem.

Q: Five years from now, what will need to have happened for either team to say this was a successful trade?

Dan: I love this question because of my five-year rule, but it is really impossible to answer. Obviously if either team wins with their new assets that will make the trade a win. I’ll focus on Sky Blue for a moment though. The club has missed the playoffs four straight years and even a successful year at the box office by their standards left them near the bottom in attendance. They need faces to build around and attract fans. In Tasha Kai’s heyday in WPS she was by far the team’s most popular player and I think Groom can have a similar connection with the Jersey crowd. If she and Gibbons and the mystery player behind Door No. 4 can help form the nucleus of a winning team, then Sky Blue will be thrilled with the move. The same applies to the Royals but they should have more flexibility to make more moves if this one does not pan out exactly as planned.

Allison:  Unlike Dan, I’m not as much of a fan of this question because I know how few fans are willing to look at the long-term over the short term. Fans (and front offices) want results as soon as possible. That being said, as a new team coming into the league, it’s hard to argue that this was not a successful trade for Utah. They get a versatile USWNT player with a recognizable name and sizeable fanbase to come to their team, instantly drawing even more attention and excitement to the Royals. If they finish at the bottom of the table in 2018, few people will really bat an eye since they’re a new team and it could be chalked up to growing pains. Sky Blue, on the other hand, lost two of their veterans, one of whom was very much at the core of the team’s play on the field. If they fall short of the playoffs this year, it’ll be seen as a bad trade regardless of what happens five years from now. In light of FC Kansas City’s demise and talk of other teams facing similar perils, Sky Blue has to be feeling the pressure. If they don’t start getting better results and higher attendance figures, they may not even be in the league five years from now.