Five named finalists for US Soccer Female Player of the Year 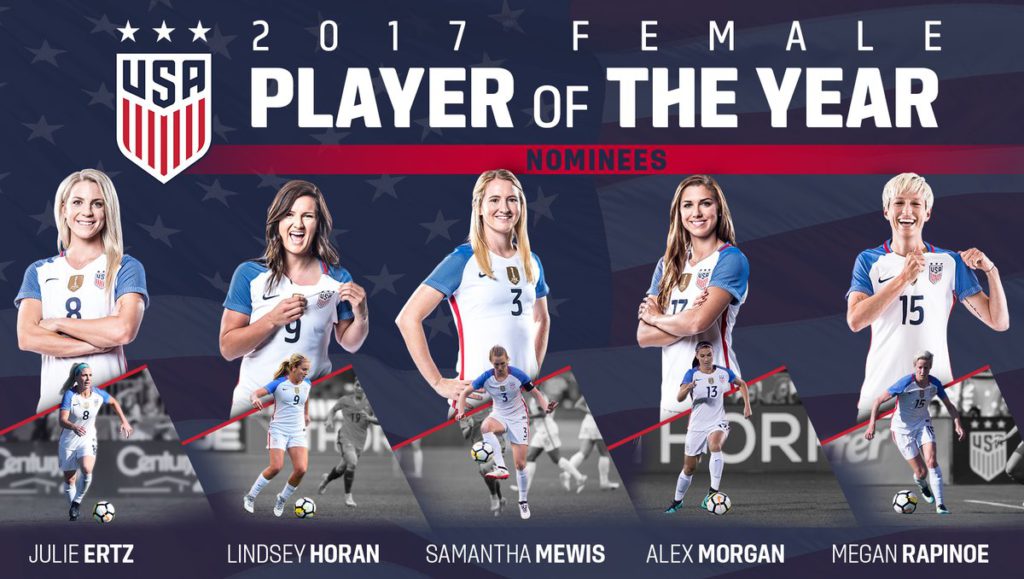 U.S. Soccer announced its end of the year award finalists on Tuesday and former winner Alex Morgan heads the list of five for Female Player of the Year. Morgan is joined by Julie Ertz, Lindsay Horan, Samantha Mewis, and Megan Rapinoe.

Morgan, who won the award in 2012, led the U.S. national team with seven goals in 2017 and went on a summer tear with the Orlando Pride and wound up with nine goals in 13 NWSL appearances. Ertz scored six times for the U.S. and was an NWSL MVP finalist for the Red Stars, in both cases improving her game after shifting to the midfield from central defense.

Rapinoe and Horan led the USWNT in assists with five and four respectively and were also prominent in league play. Rapinoe was in the running for NWSL Golden Boot until returning from Tournament of Nations with a knee injury and missing several weeks. Horan scored the lone goal in the Portland Thorns NWSL Championship victory.

Mewis started every USWNT match in 2017 and was named to the NWSL’s Best XI as leader of the midfield for Shield winning North Carolina Courage.

Voting for the award is open and will remain open through 11:59 p.m. EST on Tuesday, December 12. The winners of the awards will be announced throughout the month.