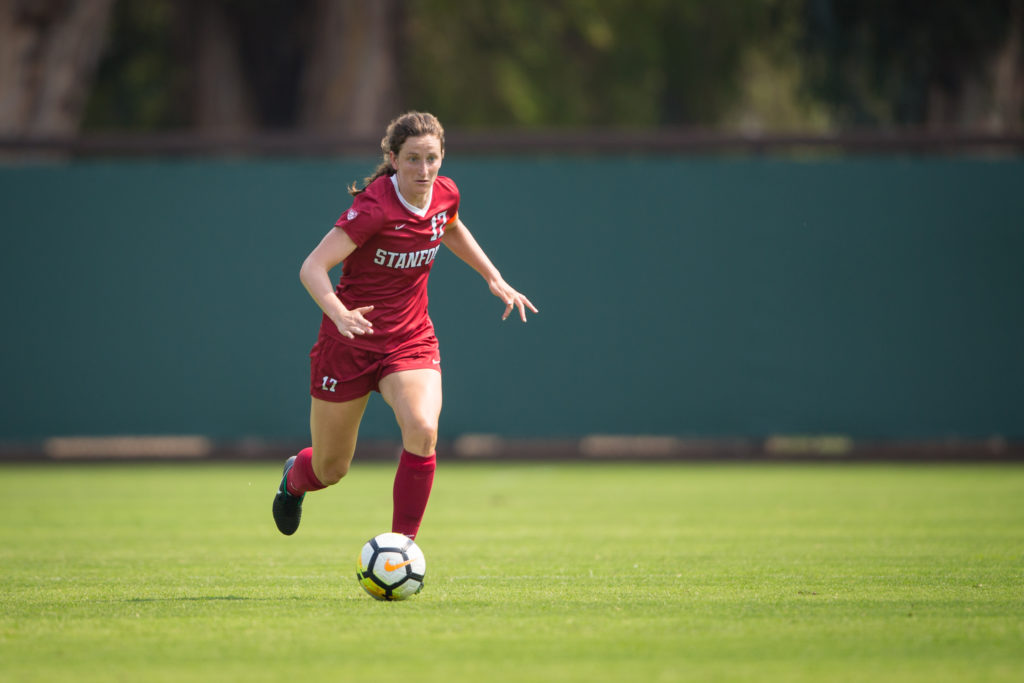 ORLANDO – Life is rarely linear. Much like the mega coasters that line I-4 to the south of Orlando, every person’s journey is bound to have ups and downs. That made central Florida a fitting backdrop for the last ride for one of college soccer’s most accomplished players of recent vintage, Andi Sullivan.

A little over a year ago, the Cardinal star was flying high. Just weeks removed from earning her first cap with the U.S. national team, Sullivan was playing for Stanford in what figured to be a long NCAA tournament run. A fluke play and, in an instant, it was all over. A torn ACL. Season over and just minutes after the play that ended Sullivan’s junior season, Santa Clara would score and end the Cardinal’s season in just the second round of the NCAA tournament.

“Last year when I got hurt, I felt like I was playing the best soccer I’ve ever played, and so I was also really enjoying myself,” Sullivan said Saturday. “I felt like I was on the cusp of my dreams, so to go from the highest of highs to the lowest of lows was extremely tough, but I feel like I’ve learned a lot from the journey and have been humbled through that experience.”

Just a few days past the first anniversary of the surgery to repair the ACL tear in her left knee, Sullivan walked off the field for the last time in a Stanford uniform hoisting the NCAA trophy, the perfect swan song for an athlete that’s been so important to the program throughout her time in Palo Alto.

t’s true that as the fulcrum of the Stanford midfield, her calm, controlled presence is at times deceptively simple and yet impactful. But it in truth, it’s even harder to see what she beyond those on field performances.

“She’s a born leader and she makes our training sessions more intense,” Stanford head coach Paul Ratcliffe said about his senior captain. “She makes me want to be a better coach. She makes all of her teammates better. The level of intensity that she brings to every training session, everything she does just makes everyone want to get better.”

Although “born leader” in an oft-used descriptor, it is appropriate in Sullivan’s case. The 21-year old’s maturity and leadership has long been lauded. In 2014, she wore the armband for the U-20 World Cup Qualifying Tournament despite being the youngest member of the squad.

A select group of players under Ratcliffe’s tutelage have been given the responsibility of captaincy for three-fourths of their Stanford careers including Rachel Van Hollebeke and Marisa Abegg. Sullivan is a member of this group. On Saturday, Ratcliffe admitted in hindsight he should have named the Virginia native captain a year sooner.

On the subject of her leadership ability, Sullivan is quick to deflect, finding that the attention she’s gotten for it isn’t warranted. Perhaps that type of reaction is fitting coming from a holding midfielder whose role includes doing the work that allows other people to shine.

“I think that our Stanford team has a lot of really good leadership and a lot of different leadership styles, and so I think I’m getting a lot of unnecessary credit,” Sullivan said. “I think so many people have different roles on this team and everyone has stepped up and fulfilled them and so my job’s been pretty easy.”

A subject the senior more keenly discusses is what she’s learned in the last year both as a player and a person, the key lessons she’s taken from her injury and the subsequent recovery concerned perspective and patience.

“I think now I’m like okay, whatever moment I’m in, I’m in it, and I can’t really change that and so just I’m embracing every moment and making the best out of it,” Sullivan said. “I developed as a person and (am) investing in relationships, my education, all that stuff.”

Those lessons were hard won as she dealt with the intense rehab, small incremental progress and the frustration of not being “herself’ on the soccer field. The midfielder had to work her way back both in terms of her skill set and her minutes on the field.

On Sunday, Sullivan attempted to put into words what it felt like to end her college career as a national champion.  “I don’t think I’ve ever felt so like complete in my whole life,” she said.

Maybe a person can only truly understand what it means to be complete after losing, albeit temporarily, a big part of herself.

Monday Roundup: World Cup qualifying reportedly back in the United States
Five named finalists for US Soccer Female Player of the Year