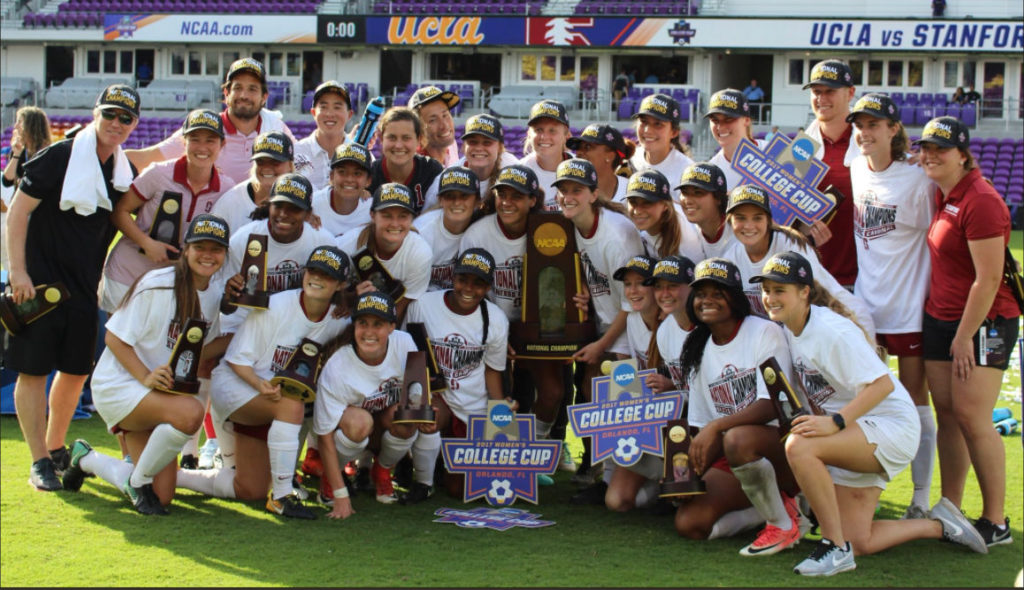 The No. 1 team and top scoring offense in the nation, the Stanford Cardinal, lived up to their reputation, defeating Pac-12 rivals UCLA, 3-2, in the 2017 NCAA College Cup Final. Jaye Boissiere’s long-distance strike in the 67th minute was the difference maker, earning Stanford their second national title in program history.

Stanford took a two-goal lead into the half after the nation’s points and assists leader, Catarina Macario, set up both Kyra Carusa and Andi Sullivan in the Cardinal’s final third. The first goal came in the 15th minute after Macario sent a lofted pass from the near corner of the field, luring Bruins goalkeeper Tegan Micah off her line in attempt of collecting. However, Micah was unable to come down with the ball, allowing it to bounce to Carusa in front of a wide open net, and the redshirt junior forward easily volleyed the ball past a Bruins defender for the match’s opening goal.

Kyra Carusa blasts in the opening goal to give @StanfordWSoccer the 1-0 lead against UCLA!

The second Cardinal goal came in the 26th minute when the UCLA defense left Sullivan unchecked in the Cardinal’s offensive half, allowing her to make a run towards the box, where Macario sent her a perfectly-weighted pass. The USWNT midfielder had the patience and vision to take a few steps to get the best look on goal before one-timing a right-footed shot past Micah to double Stanford’s lead.

A beautiful combination by Stanford ends with a goal by Andi Sullivan (25′) to give the Cardinal a 2-0 edge over UCLA. #WCollegeCup

Although Stanford enjoyed the lion’s share of possession and opportunities on goal, UCLA had a number of dangerous opportunities themselves in the opening half. The two most threatening of those came from the Bruins’ leading scorer, Hailie Mace, who nearly capitalized on a bad decision from Cardinal keeper Alison Jahansouz in the 32nd minute. Jahansouz took one too many touches on a back pass from her defender and was nearly dispossessed of the ball by Mace right in front of the goal. However, the ball took a lucky bounce back to Jahansouz, who was able to collect it to deny Mace a shot of her own on an empty goal. Mace then nearly pulled UCLA back within one in the final minutes of the first half, sending a low, hard shot towards goal only to have it cleared off the line by Stanford defender Tegan McGrady.

That trend did not continue in the 55th minute minute though when Jahansouz came off her line and upended UCLA defender Zoey Goralski inside the box. The referee blew his whistle, showed Jahansouz a yellow card, and pointed to the spot. Canada midfielder Jessie Fleming stepped to the mark for UCLA and took the penalty. Although Jahansouz guessed the right direction and looked to have gotten a hand on Fleming’s kick, she was unable to make the save, and Fleming converted to put UCLA on the board.

A look at the penalty kick by Jessie Fleming (54′) that put UCLA on the board! #WCollegeCup

Fleming’s penalty kick gave the Bruins new life, and the team that only took two shots all first half were suddenly back in the match. They managed to pull level just four minutes later when freshman Delanie Sheehan was able to beat Carusa to a Bruins corner kick, redirecting the set piece ball with a header past Jahansouz for the equalizer. The second Bruins goal marked the first time a women’s College Cup final had both teams score multiple goals.

This header by UCLA’s Delanie Sheehan off a corner kick ties it! #WCollegeCup

Less than 10 minutes later though, Stanford retook the lead through redshirt sophomore Jaye Boissiere, who blasted a shot from about 25 yards out for the game winner. Boissiere was set up by Macario, who assisted all three of Stanford’s goals in the match to end her freshman campaign with 17. That was enough to see her overtake USWNT and Chicago Red Stars forward Christen Press as the all-time single-season assists leader in the Stanford records book.

As the second half wore on, fitness became an obvious issue, as UCLA looked noticeably tireder than Stanford. UCLA played in the second semifinal match Friday night, a match that was decided via penalties. Seven Bruins starters played all 110 minutes in that match, and as a result, struggled to keep up with a Stanford team that was more rested. Stanford easily outlasted UCLA and emerged the victor once the final whistle blew. Following the match, Stanford hoisted the NCAA National Championship trophy for the first time since their first NCAA title win back in 2011.