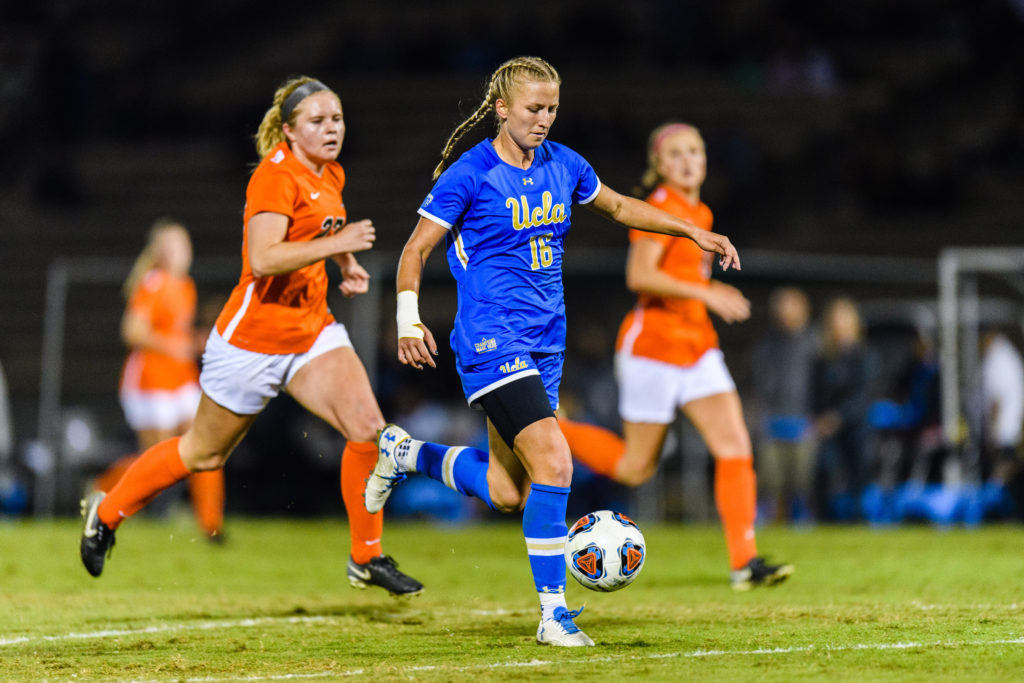 Hailie Mace controls the ball in a contest earlier this season. Mace has paced the Bruins with 15 goals this season. Photo Credit: Percy Anderson

ORLANDO — Sunday afternoon both Stanford and UCLA will offer lineups chock full of players with some of the most coveted resumes coming into college. Among the players who will be decked out in blue and gold, however, is a player whose path to one of the most prominent programs in the collegiate game is one a little less well traversed.

For UCLA forward Hailie Mace that path started with an email to the program, or more precisely, the video attached to that email. Now the junior, after converting to defense a la Megan Oyster for her first two seasons in Westwood, functions as the team’s leading scorer. Mace’s 15 goals trail just Stanford’s Catarina Macario for most goals scored among the players who made the trek to Florida this weekend.

What associate head coach Joshua Walters saw in that video was an explosive, athletic player. The video begged the question for the UCLA coaching staff: is she as fast as appears on film?

Anyone who’s watched UCLA this season knows the answer to this one. Mace is the kind of speed that makes it seems as though she was hurled out of a slingshot two seconds before anyone else on the field started moving.

Intrigued by what she saw, head coach Amanda Cromwell made the trek to a small tournament more frequented by coaches on the Division II or III coaching circuit. There, Cromwell ran into one of her friends, Sue Patberg of Emory University,  who warned her that there wasn’t anyone to be found for her program there.  As soon as the game kicked off, it became abundantly clear what drew Cromwell off the beaten path.

“We were watching together and off the kickoff, she was a rocketship,” Cromwell recalled of the first time she saw Mace play live. “She was playing forward at the time.  Sue turned to me and was like ‘Oh, that’s why you’re here.’”

Mace, a dual-sport athlete juggling soccer and volleyball, competed on the type of club team typically not associated with Division I prospects. That left the Ventura, California native off most everyone’s radar to that point.

At UCLA, the junior quickly played her way into the starting eleven, first on the backline, where she earned All PAC-12 honorable mention honors a year ago, and then as a forward this season. At times this year, Mace has dropped back to defense or center midfield when needed to close out games.

“I think the scary thing for other teams is she’s still fine-tuning a lot about her game,” Cromwell said about her top scorer. “She’s just scratching the surface of how good she could be as a nine and we know how good she can be as a center back and I think at the next level she can play both positions. Having a player that can basically any position on the field is pretty special.”

With the arrival of freshman defenders Karina Rodriguez and Kennedy Faulknor on campus, the Bruins had the ability to shift Mace to the number nine position where she’d be able to more fully harness her explosiveness.

Cromwell admits that Mace was a bit reluctant to move up top after settling in at the back and finding success.  The Bruins head coach believed the speedster could score 20 goals if she moved back to her old high school position. While she has fallen a bit short of that prediction barring a game for the ages in the final, tallying 15 in her first season playing as an attacker is quite an accomplishment. Once the junior irons out the nuances of finishing like the timing of her runs and reading the keeper her coach anticipates those totals to grow.

“Right now, I’m thinking there are four or five goals (she missed) that she scores probably 90% of the time,” Cromwell said. “I mean you add those she’s at 15 right now she could be well over 20 right now.”

While only time will tell if Mace will draw closer to that 20 goal mark next season, the value she adds to the Bruins’ attack is already certain.

“She’s gotten better just throughout the season, you can see her confidence has risen,” Cromwell said. “Anyone scoring that many goals, a team just has to be on the lookout for her but the thing is if you key in on Hailie then you have you have everyone else running at you that can score goals as well.”

When “everyone else” includes the likes of Ashley Sanchez and Jessie Fleming, that’s a recipe for success. Whether she ends up on the scoresheet or not tomorrow, Mace not giving up on her goal of playing college soccer helped give the Bruins the chance at accomplishing of its own – winning a second national title.