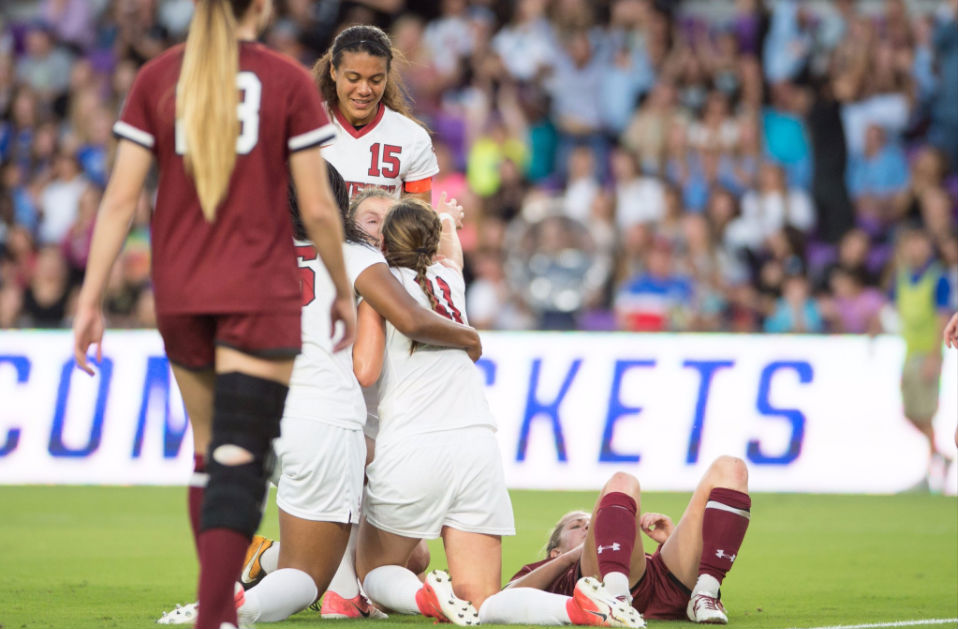 Stanford becomes the first team to advance to the 2017 NCAA College Cup Final after defeating South Carolina, 2-0, in the first of two semifinal matches on Friday. A first-half brace by junior midfielder Jordan DiBiasi was enough to send the nation’s leading offense to Sunday’s final.

The semifinal match started off on a bad note for the No. 5 Gamecocks, who lost a key attacker early in the match. Freshman forward Ryan Gareis stayed down following a hard challenge and had to exit the match in just the 10th minute. Gareis, who has three goals and an assist on the season, did not re-enter the match and was seen on the sidelines at the start of the second half with her left knee wrapped.

Adding insult to injury, Stanford scored off the free kick resulting from the foul that resulted in Gareis’ exit. Tegan McGrady sent in the set piece service, which Jordan DiBiasi slipped in front of her defender to get her head on. DiBiasi’s header went into the back of the net to put the Cardinal on the board and was the first goal conceded by South Carolina all tournament.

However, it would not be the last, as DiBiasi struck again in the 26th minute to double Stanford’s lead just after the halfway mark of the first half. Catarina Macario drove the ball down the far side before sending a cross in for DiBiasi, who was making a run near the penalty spot for the freshman forward. South Carolina’s defense was unable to intercept the pass, and DiBiasi redirected her shot off a Gamecock defender, making it impossible for South Carolina goalkeeper Mikayla Krzeczowski to make the save. With the assist, Macario now leads the nation in assists with 14.

Another epic finish by Jordan DiBiasi on her second goal for Stanford! The Cardinal lead South Carolina, 2-0. #WCollegeCup

The game opened up some following DiBiasi’s second goal, but South Carolina was unable to capitalize on any of the opportunities they created. Although senior Savannah McCaskill didn’t register a shot all match, she did create multiple opportunities for her teammates, although none of those came to fruition. Following Stanford’s second goal, South Carolina was awarded a free kick within scoring range, which McCaskill took, but none of her teammates were able to get on the end of her service. Later she made a dangerous run towards goal before playing the ball into space, but, once again, none of her teammates were able to make the run into space to be on the receiving end.

As the clock ticked down in the final seconds of the first half, Stanford nearly scored again, but the shot was saved off the near post by a South Carolina defender. The game went into halftime with Stanford leading, 2-0.

Stanford opened the second half the same way they ended the first, with another close chance on goal. Macario nearly made it 3-0 in the first minute of the second half, fighting through the South Carolina defense to get into enough space to fire off a shot. However, her shot hit the far post, which put enough of a slow spin on the ball to prevent it from crossing the goal line before Krzeczowski could jump on it. The referee stopped play to check the video replay, but it was confirmed that the ball did not completely cross the goal line, and the score remained two goals to nil.

Although Stanford did not add to their goal total in the second line, they continued dominating possession and creating opportunities on goal. The Cardinal outshot the Gamecocks 17-5, putting seven shots on goal to South Carolina’s one and forcing Krzeczowski to make five saves on the night.

With the win, Stanford advances to the College Cup Final for the fourth time in program history and will look to add another national title to the one won in 2011. The Cardinal will take on Pac-12 rivals UCLA on Sunday, December 3 at 12 p.m. ET. The game will be televised on ESPNU or streamed via the WatchESPN app.