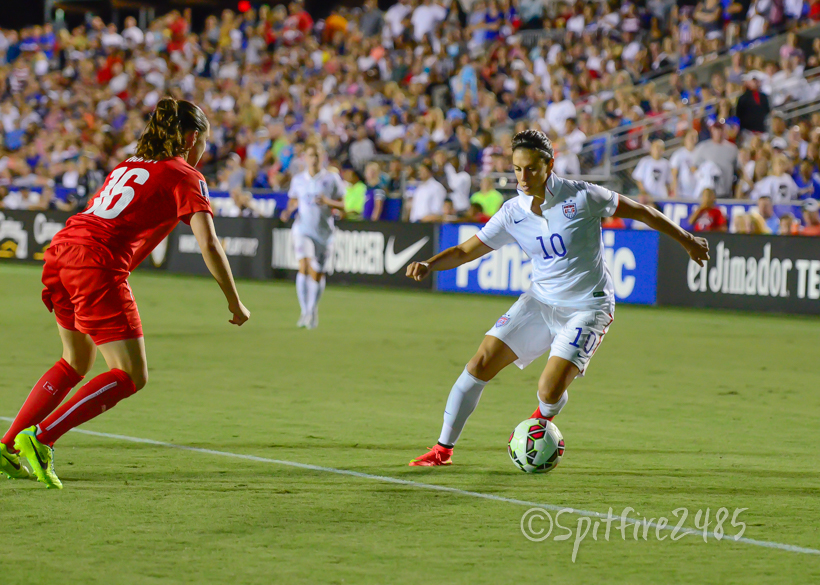 Carli Lloyd says age is just a number. At 38, she’s still trying to get better. (Photo Copyright Nicole Gamard for The Equalizer)

SAN JOSE, California – You can never count out a high level superstar athlete. When the peanut gallery and the naysayers start talking, that’s always fuel for the best of the best. U.S. Soccer’s Carli Lloyd, thrives off fans, media, and anyone else talking rubbish. Top performers in all sports, garner the most discussion, and noise because they are great at what they do. Lloyd hears it, reads it, but it’s not something she lets bother her.

“Oh there’s loads of doubt,” Lloyd admitted. “There’s doubts within, there’s doubt everywhere. My age, this, that. If people go back to 2005, I think they should think twice about doubting me. Michael Jordan had loads of doubters, other athletes have loads of doubters, you know, bring it on. It’s a motivation, and for me, it’s just about wanting to be better, and better every single day. Whatever has gone on this year, it’s done, and dusted.”

She has a lot left to offer, and is a prime example of what it means to be a clutch, and in the zone from start to finish. Coming off the bench following a return from injury is something new for Lloyd. Her spot in the starting eleven isn’t written in stone. She wants to change that and make sure the substitutes bench is not continuing trend.

“I’m going to make that very difficult for Jill,” Lloyd said. “I’m just returning from an injury and I know what I can bring to this team. I’m going to keep continuing to work, push on, and be better. I know that there’s still loads more still to come. Next year is a new year…new year, new start, and that’s where it all begins.”

The 35 year-old did come off the bench in the 75th minute against Canada and scored five minutes later to put the match to bed at 3-1. Lloyd’s experience, creativity, mind, and understanding of where she needs to be, and when, put her apart from most players on the pitch. She doesn’t settle in, get complacent, or rest on her laurels. U.S. Soccer has a generational player in Lloyd because she still wants to improve, and get better.

Don’t care what people say I️ think @CarliLloyd is one of the best midfielders in the world.

The new talent that U.S. Soccer has brought in this year won’t be helping Carli Lloyd become a better footballer. If anything, she will be helping them on and off the pitch. You can’t compare the next up and coming U.S. Soccer phenom to Carli Lloyd. When asked about that, Lloyd answered with her customary honesty.

“No disrespect to any other player, nobody gets to where I want to get by comparing myself to anybody,” Lloyd answered. “It’s more so, where I want to be in 2020, which will be the end of my career, no matter what the doubters say, and the haters. That’s when I will look back and say okay, I accomplished everything. I have a ways to go, and this is just the beginning, so everybody better buckle up. I’m just wanting to get better and better.”

The 2015 and 2016 FIFA Player of the Year has received little fan fare as she approaches yet another career milestone, 100 goals for her country. She slotted her 98th marker against Canada and could very well reach one hundred at the 2018 SheBelieves Cup. Is that something on her mind? Does Lloyd even allow herself to think about what it means?

Second goal of the year and 98th international goal for @CarliLloyd opens up the ?? lead vs. ?? in the 80th minute. pic.twitter.com/cfY5svFYpy

“You know, I don’t think it’s necessarily about achieving a hundred goal mark,” Lloyd told The Equalizer. “Although, it’s definitely something to speak home about. I think for me as a player, when all is said and done, when I’m completely done with my career, that’s one I’ll sit back and reflect. Right now, I’m hungrier for more, and I just want to keep getting, better and better.”

If supporters believe that injuries have caught up to Lloyd, and she’s past it, there’s a locker room full of teammates who are in awe of what Lloyd brings on a day-to-day basis. Andi Sullivan is starting her career on the international stage, and she learned a lot from Lloyd.

“Carli’s so inspirational, and amazing to play with,” Sullivan said. “Her mentality, I think is probably the most impressive thing. She brings that to every training session, every game, that she wants to be the best she can be for the team. I think that’s how she leads the team, showing us that we can all be like that, and make an impact all the time.”

When Carli Lloyd steps on to the pitch at the 2019 World Cup in France, and the 2020 Olympic Games in Tokyo she will do so contributing, and playing at a high level. She’s in peak shape, and thriving to be the best. You just know that she will find a way to be a difference maker because after all. “Age is just a number, bring it on,” said Lloyd.