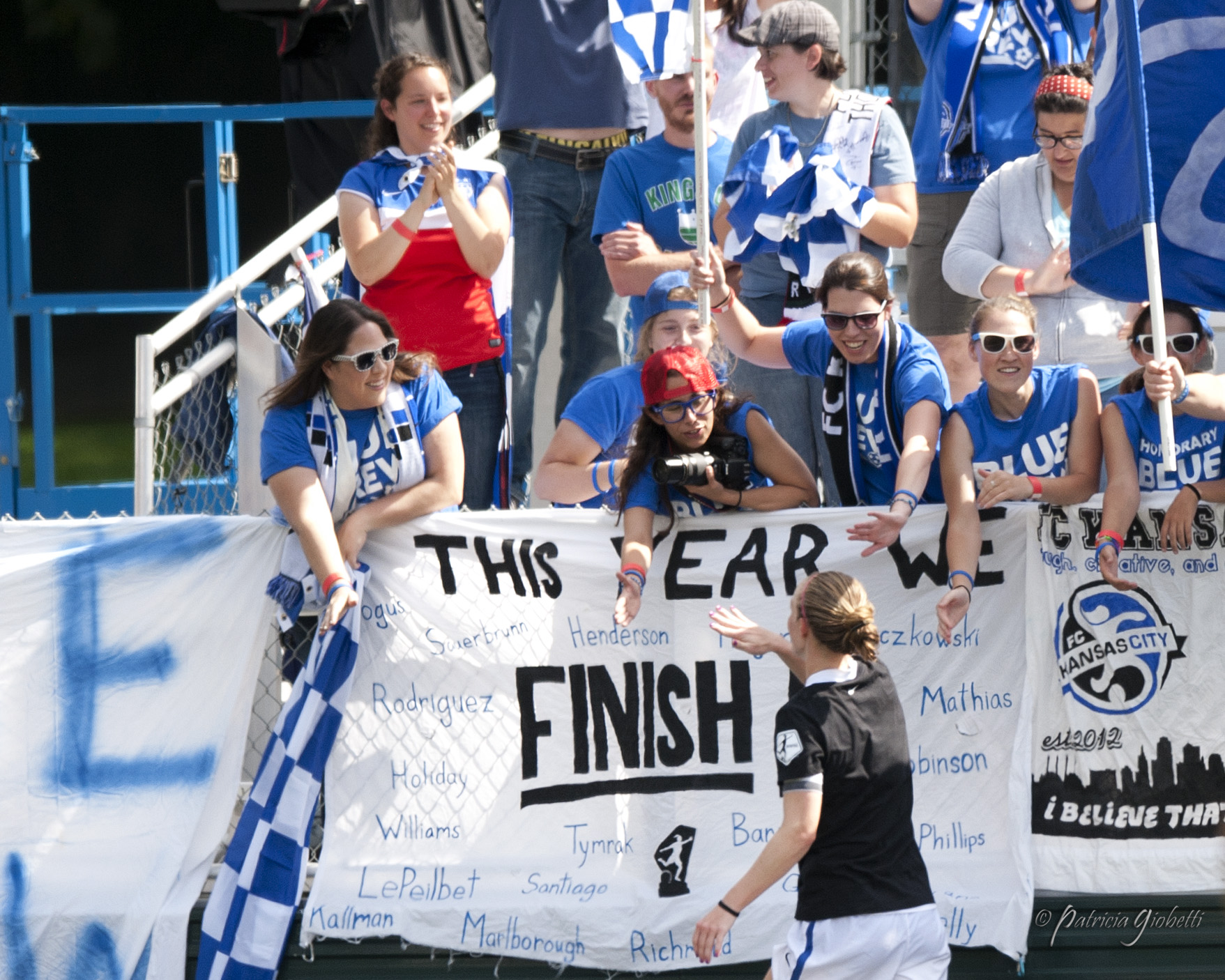 The Blue Crew had a strong presence at the 2014 NWSL Championship in Seattle. (Photo Copyright Patricia Giobetti for The Equalizer)

Monday marked the beginning of life after FC Kansas City for those staff members who remained until the bitter end. The office was already scheduled to be closed for Thanksgiving week. Staffers were let go the previous Thursday via a Facetime correspondence from an office manager, were told to take their belongings and leave their keys. They were paid through the end of last week.

According to one now former FC Kansas City employee that spoke to The Equalizer on the condition of anonymity, ownership never communicated any updates about the status of the club even after FourFourTwo reported that the club was likely to relocate.

“I know a few people who weren’t part of upper management but who had been around the game a while that told me, ‘Hey maybe you better polish up your resume.’”

Another employee we spoke to said it was “not a pretty scene” inside the walls of a team that was conducting business as usual even as owner Elam Baer was in the process of unloading the franchise to the control of the league office.

“We had our end of the season meeting about what went wrong, what went well, what do we need to do for next season,” the first employee said.

Follow up meetings occurred as late as two days prior to the announcement that Real Salt Lake was taking an NWSL franchise in a “10-team league” but the only communication to FC Kansas City employees was to instruct them not to respond to any social media postings from club accounts.

All along the way, employees were trying to piece together their future based on dribs and drabs of information from friends around the league. At one point close to the end, word spread of an email from the league office to clubs that did not include any recipients from FCKC.

Employees were finally tipped off that an NWSL board meeting took place the night before the announcement of Real Salt Lake’s club during which it was agreed not to mention FC Kansas City in any releases or press availability. It was another four days before NWSL officially announced that FC Kansas City has been dissolved, but while Salt Lake ownership was announcing their club, the FCKC staff was being fired.

“I think it’s important for people to know that I don’t think it’s the league’s fault that anything happened,” the employee said.

Sporting Kansas City, the area’s Major League Soccer team and one of the great reclamation projects in sports history, had been approached several times over the years about absorbing FC Kansas City including a year ago when the team was sold to Baer. But a relationship that once included FCKC playing matches at Sporting Park had frayed, and according to sources with direct knowledge of the situation, was not improved in the year that Baer owned the Blues.

The Salt Lake ownership has continued to remind us about the two-week timeline from initial contact from NWSL to the decision to take on a club. Multiple reports have that timeline beginning when Sporting again declined an opportunity to keep the club in market.

“I don’t think it’s Sporting Kansas City’s fault,” the employee continued. “It’s the way that the team was run from the leadership.

“There was confusion over what was important. There were some things that I believe should have been done, to say yes to a few things that we could have spent money on or done to create brand awareness in the community. The answer was always no just because we didn’t want to waste the time doing it.”

Just as NWSL and Real Salt Lake did not mention FC Kansas City during their announcement, neither did FC Kansas City make any acknowledgment. When the club’s demise was announced, a tweet thanking fans was posted, and a message on the team’s website assured fans that any and all 2018 season ticket deposits would be returned. There was no story attached to either.

“It was all about their money,” the employee said of how the club’s core fans were treated. “It wasn’t about them as people.”