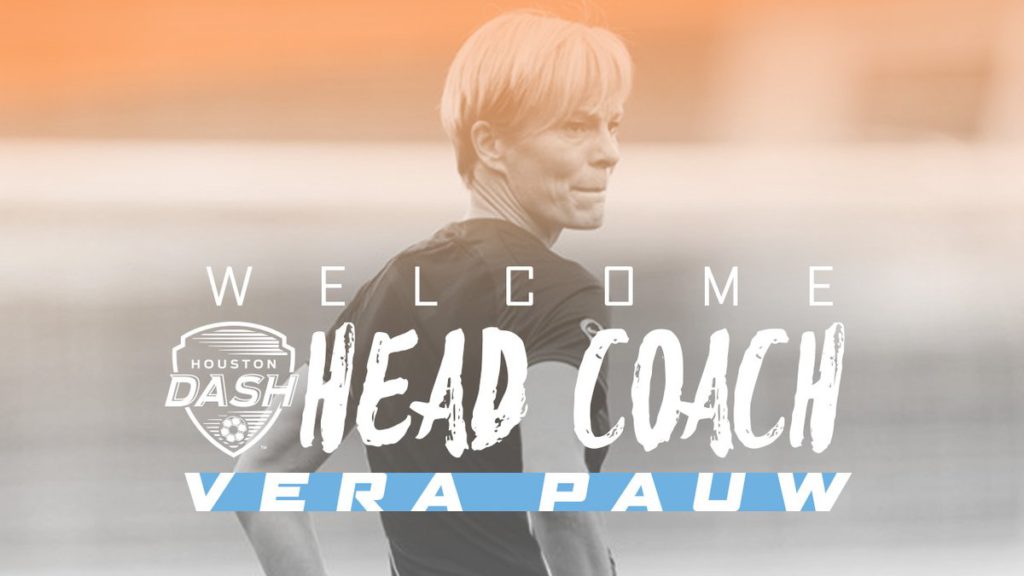 The Houston Dash have announced Vera Pauw as their new head coach. She becomes the third woman head coach to be named in the last two weeks after Laura Harvey’s initial departure left NWSL without a single female sideline boss.

“I’m very excited,” Pauw said. “It’s just a dream come true, isn’t it? To be able to be coach and play in facilities like BBVA Compass Stadium and in such a competitive league,” Pauw said. “Soccer is an evolving sport here in the U.S. with a unique background, and I am very excited about the opportunity ahead to work with a very talented roster. We have a solid core of players that will be key in reaching our goals for 2018 and beyond.”

The 54-year old native of Amsterdam coached South Africa to an appearance in the 2016 Olympic Games. Before that she Netherlands and Russia. As a player, Pauw was capped 89 times as a defender by the Netherlands. One of those caps, an upset of the United States prior to the 1991 World Cup, caught the eye of then USWNT coach Anson Dorrance who helped facilitate her being interviewed by the Dash.

“She impressed me again as the South African national coach in July of 2016 when she played the US full team to a narrow 1-0 defeat,” Dorrance said. “Her team played the game the right way, keeping possession and playing through the lines and the surprising score line won the respect of all of us that know the challenge of taking an emerging soccer nation against the world’s best. She is an experienced coach at the highest levels of the game and will enhance our ever-improving NWSL.”

Pauw will make her club coaching debut with an organization that has yet to reach the playoffs over four seasons. The Dash fired Randy Waldrum on Memorial Day of this year with the team four games into a six-match losing streak. They briefly surged under interim coach Omar Morales but never seriously threatened to reach the elusive top four.

“Of course we need to go for the playoffs, after you get to the playoffs anything can happen,” Pauw said. “The thing is you need to take it game by game and every game you have to go in to win.”

Pauw also stated her affinity for coaching in a league that features parity as opposed to the top-heavy models that pervade across Europe. “The league is so competitive and I am so excited to have a team to always be at their best to get results, and there’s no other team in the league that can put less effort in to be able to win. So, it is a special league, it is organized by the association and I know there are also downsides to that, but especially the biggest advantage is that the teams are competitive. It is exciting. It is the league with the best players in the world divided over teams is something else than in Europe where few teams have all of the players and they play in leagues where they win 10-0 or 12-0 on a weekly basis. So those clubs are less attractive to me than the place of the future.”

Dash defender Janine Van Wyk serves as captain for South Africa. “I have worked with Vera Pauw for two and a half years and she is probably the best coach I have ever worked with in my career. What I admire most about her is her professionalism, organization and her knowledge of the game. She is able to bring out the best in every single player. I’m excited to work with her again.”

Pauw has a little more than seven weeks to prepare for the NWSL Draft (January 2018), an exercise that has proven challenging for coaches in their first jobs in the United States. The Dash currently own the 3rd overall pick and five other selections.