Missed this weekend’s quarterfinals action? No worries. Here’s all you need to know about how next weekend’s College Cup participants punched their tickets to the final weekend of the season. 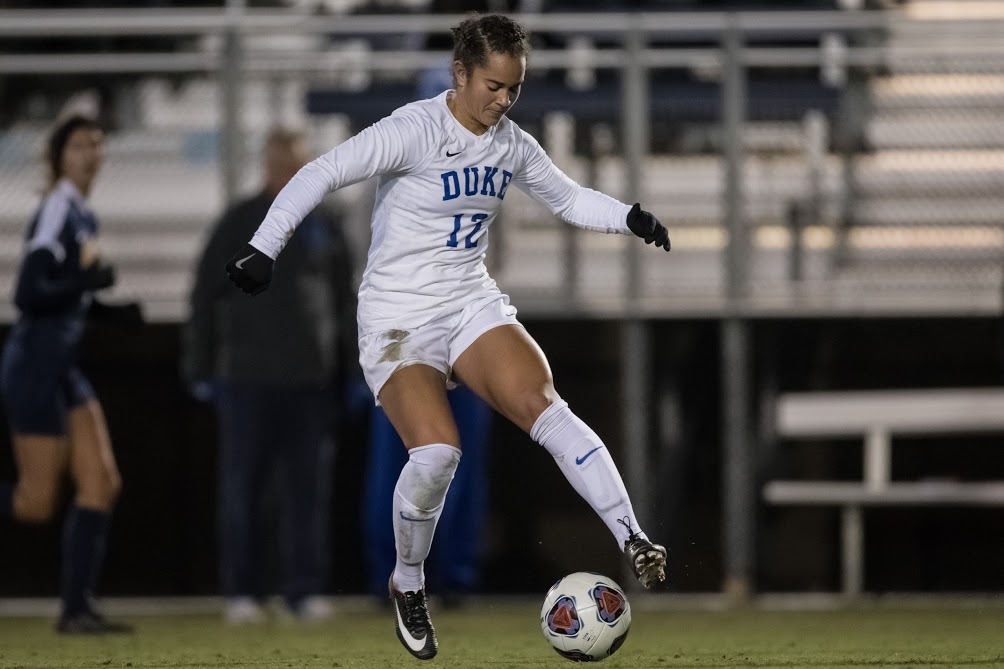 For the second time in three years, the Blue Devils will play in the College Cup as Duke defeats the visiting Baylor Bears, 4-0. For the third time in as many games, Taylor Racioppi played a role in the Blue Devils’ early game winner when, in the 6th minute of play, the junior played a centering pass from an end line. Racioppi’s pass found a charging Kayla McCoy, who put it away for the tally.

The Blue Devils would enjoy much of the possession in the first half with Baylor pressing more as halftime drew near.  Even using this strategy, Baylor was held to just two off-target shots in the first stanza.  Duke kept on the front foot and the team had a promising opportunity to expand its lead with about 15 minutes remaining in the half. An excellent kick save from Jennifer Wandt kept the Duke from converting the opportunity.

Although the Bears maintained to kept the deficit to one goal in the half, the side suffered a tremendous setback in the 40th minute when Lauren Piercy received her second yellow card thus forcing Baylor to play a woman down for the remaining 55 minutes. Piercy’s second yellow came on a challenge from behind on Duke’s Taylor Mitchell.

Almost immediately after the second half started, the Blue Devils scored two in quick succession to put the game, for all intents and purposes, out of Baylor’s reach. In the 47th minute, Chelsea Burns played a ball into Imani Dorsey, who then played it off to Ella Stevens. Stevens, who was in the six-yard box, skillfully redirected the ball into the net with a backheel. Less than two minutes later, Dorsey who add one of her own as her speed proved too much for Baylor’s backline. The senior completed the play with a far post finish that left Wandt helpful to stop it. `

Duke had stellar opportunity to extend the lead in the 68th minute when Burns made a run down the field from her left back position and was fouled in the box. Burns, who is the Blue Devils primary penalty kick taker, got under the ball and pushed the attempt high.

Baylor had perhaps its best chance of the night in the 80th minute when keeper EJ Proctor was called for holding the ball too long in the box. On the ensuing indirect free kick, the ball was played back to skillful Aline De Lima who’s attempt was well off frame.

Freshman Tess Boade rounded out scoring for the Blue Devils when she tallied with just three minutes left in the match. Boade dribbled around a Bears defender and shot the ball into the back of the net with her left foot.

With the win, the Blue Devils advance to the final weekend of the college season. Duke will play the winner of tomorrow’s UCLA – Princeton match in Friday’s semifinals.

Four ????  goals by @StanfordWSoccer in one highlight? Yup.

Stanford advanced to their first College Cup since 2014, defeating the No. 3 seed Penn State, 4-0, in the NCAA Tournament quarterfinals. Catarina Macario’s free kick goal in the match’s opening minutes was enough to put the final nail in Penn State’s season, but three more first half goals launched Stanford past the Nittany Lions and to Orlando City Stadium, the site of this year’s College Cup.

Macario, who leads the Pac-12 in scoring, opened up scoring for the night by putting away her 17th goal of the season to move into a tie for fourth most goals in the nation. Macario proved why she’s been dubbed Stanford’s set piece queen when she sent a free kick from 25 yards out into the back of the net to give the hosts the lead less than two minutes into the quarterfinal match.

Although Macario’s second-minute goal was enough to put the final nail in the 2015 National Champions’ season, the Cardinal put away three more goals, each in the first half and each by a different member of the Stanford roster. The second goal was scored by the biggest name on the squad, U.S. women’s national team midfielder Andi Sullivan, projected by many to be the first draft pick in next January’s NWSL College Draft. “Sunshine Sully” scored her second goal of the season in the 11th minute, bouncing a low-flying shot past Penn State goalkeeper Rose Chandler to double Stanford’s lead.

One minute later, Stanford went up another goal after Kyra Carusa took the ball to the endline before playing it to redshirt sophomore Jaye Boissiere, who got into the scoring action by knocking Carusa’s pass past Chandler for Stanford’s third goal in the opening 12 minutes of the match. The final goal of the match was scored in the 25th minute after Macario sliced the defense with a flawlessly-weighted through ball for Carusa, who simply had to flick it on goal to finish the opportunity and seal the win for the Cardinal.

Although the Cardinal proved early on why they’re the top-ranked offense in the country, on the other side of the field their defense proved why they’re No. 4 in the nation, holding Penn State to just six shots, only two of which were on goal. The defense did allow twice as many shots in the second half, but only one shot was put on goal by the Nittany Lions in each half.

Alison Jahansouz, who pretty evenly split goalkeeping duties with Lauren Rood during the regular season only to start in every match of the NCAA tournament, tallied two saves on the night to deny each of Penn State’s chances and preserve the clean sheet. However, she’ll share the quarterfinal shutout with Rood, who entered in her place in the 75th minute.

Penn State also made a goalkeeper change, replacing Chandler with Amanda Dennis in the 67th minute. Dennis added one save to Chandler’s four, but it was not enough to undo the damage Stanford had done in the first half. Despite not scoring in the second half, Stanford’s four first-half goals were more than enough to advance them to the College Cup, where they will now take on fellow No. 1 seed South Carolina Gamecocks. 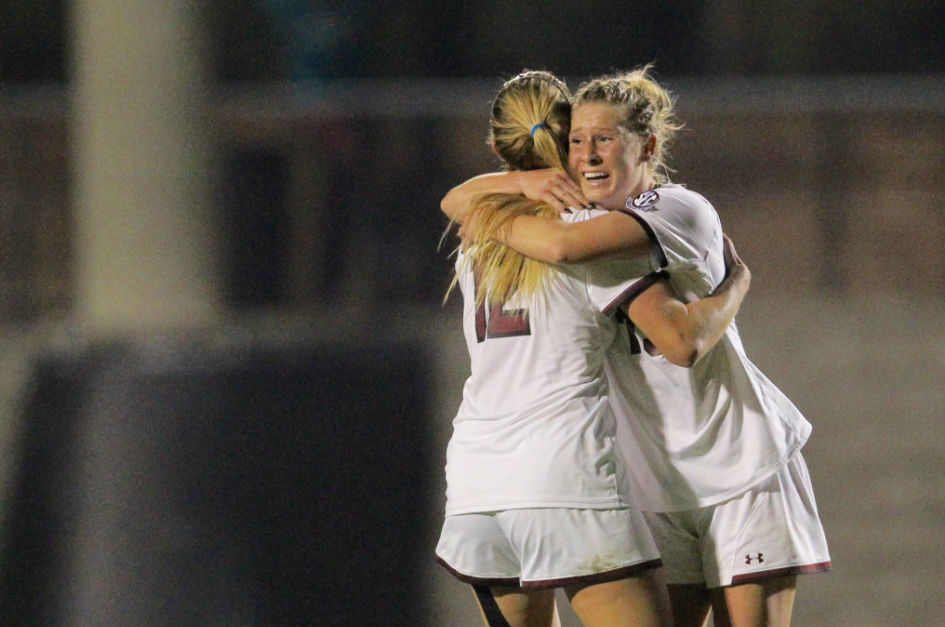 Florida might be the most storied program in the SEC, but don’t tell that to the South Carolina Gamecocks, who defeated the Gators, 2-0, on Friday night to advance to their first ever College Cup. Grace Fisk scored for the Gamecocks in the second half, with Lindsey Lane adding an insurance goal late in the second to punch South Carolina’s ticket to Orlando.

Unlike the other quarterfinal match on the Gamecocks’ half of the bracket, the match at Stone Stadium started off in a bit of a defensive battle, with the two teams holding each other to just one shot on target in the opening half. Although South Carolina keeper Krzeczowski saved the Gators’ shot put on target, Florida netminder Kaylan Marckese was unable to do the same, giving up a goal in the 13th minute.

That goal came off a set piece as Lindsey Lane provided service from the near corner inside the box. Grace Fisk got on the end of it, bouncing a hard header off the pitch and over the Gator defense, past Marckese’s reach, and into the upper 90 to put the hosts on the board in the first quarter of the game.

From there Florida really cranked up their offense while South Carolina was content to play defense and patiently await for the perfect moment to strike. As a result, Florida was the more offensively dominant team, almost doubling the number of shots taken by the hosts (13-7). However, none of the chances the Gators created on goal slipped by Gamecock keeper Mikayla Krzeczowski, who tallied four saves on the night to preserve the clean sheet.

In comparison, South Carolina only put two shots on target all match but were able to convert on both. The second Gamecock goal came in the 77th minute when Lane sent in a rocket from distance that blasted past Marckese and into the back of the net to seal the win for South Carolina.

The Gamecocks will now face top seed and top-ranked Stanford in the College Cup semifinal on Friday, December 1.

Hailie Mace scored a brace to lead the Bruins over the Tigers 3-1 in the final quarterfinal match. The junior’s pace caused issues for the Princeton defense throughout the night for the Tigers. Princeton had given up just eight goals total on the season coming into the evening’s contest.

The Bruins controlled throughout the match but it was especially a one-sided affair in the first stanza. Princeton managed just one shot on goal in the first forty-five minutes as the Bruins put the Tigers under pressure almost immediately after the opening whistle.

Hailie Mace got the Bruins on the board in the 16th minute when she headed in a well placed cross from MacKenzie Cerda. The tally came after UCLA earned four corner kicks and a free kick in the final third in the opening 15 minutes of play.

Just two minutes later, the Bruins got an insurance goal set up by a beautiful passing sequence between Zoey Goralski and Ashley Sanchez. Goralski laid the ball off to Sanchez who sent the ball into the center of the box from near the end line. A crashing Athens ran onto the pass and easily finished.

UCLA had several promising opportunities to further pad its lead before halftime but was denied. Natalie Grossi, who finished the contest with 10 saves, came out and cut off a dangerous ball around the 28th minute. The sophomore keeper then made a tremendous save on a spinning shot by Anika Rodriguez from inside the 18 yard box.

In the second half, however, the Bruins took advantage of a miscue from Grossi on the game’s final goal. As Mace came streaking down  Grossi came out to challenge but the junior was able to get the shot off despite being off balance. The shot, taken just outside the box, found the back of the net.

Prior to Mace’s second goal, the Tigers did manage to pull within one as Abby Givens was able to net one on a counterattack in the 55th minute. Givens’ goal was set up by Courtney O’Brien who played a ball out wide to Givens as the two entered the attacking third. Unfortunately, for the Tigers’ hopes for a comeback, Mace’s second tally came just 6 minutes later.

With the victory, the Bruins nabs the final spot in the College Cup. UCLA, the only non-one seed to make the final weekend, will face Duke on Friday.