Champions League: Lyon defense to continue against Barcelona in quarterfinals 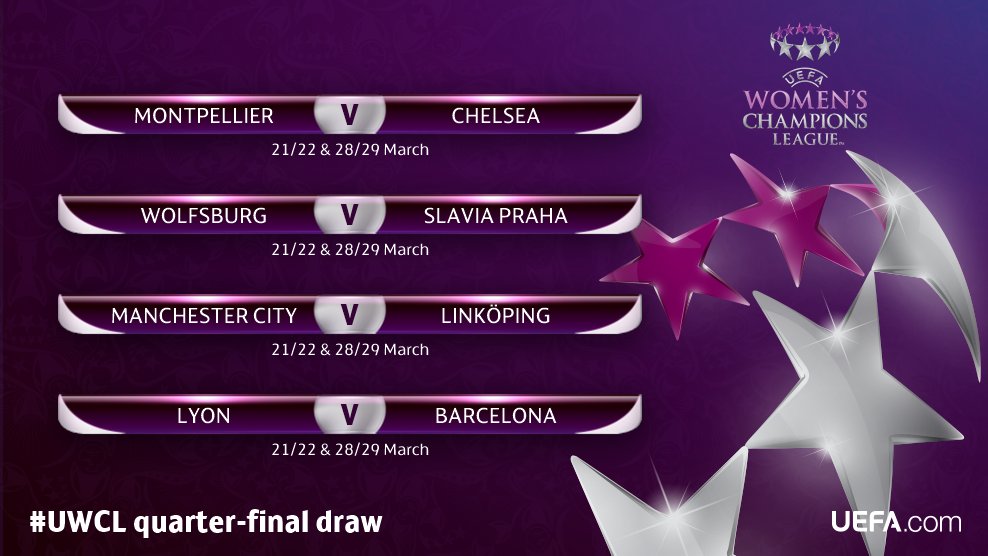 Lyon’s bid for a third consecutive UEFA Women’s Champions League title will continue with a quarterfinal tie against Barcelona beginning March 21 or 22 in France. The return leg will be the following week. Barcelona made history earlier this year by becoming the first Spanish club to reach the semifinals where they lost to Paris Saint-Germain. The road back to the final four will be difficult against the top club in the world, Lyon, which has not dropped a point in domestic play this season.

The most evenly matched quarterfinal match up looks to be French runners-up Montpellier against Chelsea with the opening leg also in France. Montpellier have not been this far since 2010 when they lost the semifinal to Umea on away goals. This will be Chelsea’s first appearance in the last eight.

Manchester City’s bid to return to the semifinals will open at home against Linkoping. And two-time champions Wolfsburg will host the first leg against Slavia Prague.

Going forward the French and English sides were both drawn on opposite halves meaning they cannot meet until the final on May 24 in Kiev. Lyon are on course to play Manchester City in the semis for the second straight year.

Kerr, Morgan among those shortlisted for CONCACAF Player of the Year
Australian W-League Week 5 Review