FC Kansas City is no more. The National Women’s Soccer League officially pulled the plug on the franchise Monday. The club will be replaced by the one announced last week to be under the same umbrella as Major League Soccer’s Real Salt Lake. Even if the transfer of ownership from the seemingly ambivalent Elam Baer to the uber-ambitious Dell Loy Hansen turns out to be a good thing—which is almost certainly will—November 20, 2017 should still be considered a sad day for women’s soccer.

There will be other time and other space to debate and dissect the reasons that FC Kansas City is now a memory instead of a reality. For now though, I have come up with five things I will remember most about the team’s mostly five-year run of beautiful soccer and ghastly front office decisions. Note that these are my memories and were not researched except to confirm facts. They are literally what came to mind when I tried to think back on the life of FC Kansas City.

After WUSA and WPS announced themselves with nationally televised inaugural games, NWSL kicked off in 2013 with almost no national visibility whatsoever. There may not have been television or a flyover or anything too memorable to mark the occasion. What NWSL’s first match did have was a sellout crowd—in the most literal sense—at a Kansas high school football field called Shawnee Mission District Stadium.

Fans arrived early to tailgate and then backed the seats with standing room tickets allowing an overflow crowd of 6,784 to stand shoulder-to-shoulder to cheer on the city’s newest team. The ambitious ownership group that set out to average 4,000 fans per game was well on its way to clobbering that goal, and it was clear from the beginning that the team was well run off the field.

On the field, it took Renae Cuellar all of three minutes to score the first NWSL goal, but the home side settled for a 1-1 draw against the eventual champion Portland Thorns FC. But the seeds of Vlatko-ball, the tiki-taka style of building the attack with short passes implemented by head coach Vlatko Andonovski, were already on display.

A pair of under-the-radar players debuted for FC Kansas City that night as well. Becky Sauerbrunn and Jen Buczkowski were both known commodities, but they both went to new levels as part of Andonovski’s system. It was 2016 before Andonovski would roll out a starting lineup that did not include Buczkowski and it was also that year that an NWSL Defender of the Year trophy went to a player other than Sauerbrunn.

There was plenty of uncertainty walking out of Shawnee that night, but it sure did not seem as if FC Kansas City was destined to become one of the league’s problem children, eventually forcing a sale.

(One other random note from that night. My seat was next to a window separating the press box from a luxury suite. When FCKC were whistled for a penalty, then USWNT coach Tom Sermanni tapped on the window asking to see the replay on my YouTube stream. I couldn’t show him yet. The stream was about six minutes behind. We tend to remember the YouTube era with fondness but let’s not forget that platform was riddled with errors at the start.)

This one doesn’t need much written about it. But to set the scene, FC Kansas City led Seattle Reign FC 1-0 in the 2014 NWSL Championship at Starfire Stadium. A Reign player had climbed over the back of Lauren Holiday who briefly pouted toward referee Margaret Domka. And then the ball came to her. Watch and enjoy—and don’t overlook the finish by Amy Rodriguez.

A year later, Holiday and FC Kansas City were back at the NWSL Championship only this time the game was Holiday’s last in NWSL. Two months before the 2015 title match, Holiday had scored in the World Cup final and a day later announced that 2015 would be her final season. Her 2015 NWSL Championship was quieter than 2014 thanks in part to a more defensive assignment. The result was the same—Kansas City over Seattle.

Holiday was brought to the post-match press conference and it was immediately clear she had been crying not long before arriving. The early days of NWSL—some may say this still pervades—featured national team players who appeared to be indifferent toward their clubs. Holiday was anything but. She had wanted to be placed in an unfamiliar situation to challenge the boundaries of her comfort zone and in doing so found a new comfort zone in Kansas City and playing for Andonovski who she thanked profusely in her au revoir messages later in the year (her career ended during the USWNT Victory Tour.)

FC Kansas City retired Holiday’s # 12 and for the last two seasons, a pennant with that number was raised during all FCKC home matches. The connection she made with the team and the city was something to behold. Someday, somewhere, maybe that flag will fly again but for now it will serve as a memory of the team and its fulcrum player. 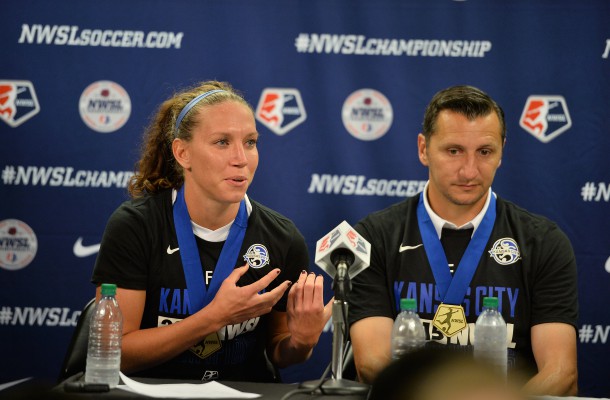 IV. The set pieces, and the goal that woke up WoSo

For all of their attributes, FC Kansas City could never quite figure out how to defend set pieces (Seattle, you’ve been warned) and too often dropped points late in matches. In New Jersey alone, they once gave up two late goals to Monica Ocampo, both after long balls were allowed to bounce in the box. Three years later they conceded when Heather O’Reilly was blinded by the sun glare defending a set piece and backed into an attacker for a penalty. In what turned out to be the Blues’s final trip to Yurcak Field they led 2-0 before Sam Kerr’s 12-minute hat trick did them in.

The one that stands alone was the goal that woke up women’s soccer Twitter. In the first match for the league after breaking for the World Cup group stage, FCKC held a 1-0 lead as the clock at Portland’s Providence Park struck 90 and sent the match to stoppage time. After the Thorns won a corner kick their goalkeeper, Micelle Betos, came all the way forward to put herself into position to get on the end of the corner. The first one was sent wide off a Kansas City defender but Betos had been left open. No one marked her on the second attempt either and Allie Long’ corner kick went directly to Betos who headed in the equalizer.

The match was played late on a Friday night and there was not too much social media buzz about the match. But when the Thorns goalkeeper scored everyone turned off their silencers and Twitter exploded with amazement. It was not a pro Kansas City moment, but it was one they will be forever linked to (and since they ended that season as champions they probably don’t mind.)

FC Kansas City was very much defined by their style on the pitch, but it was difficult to think about the team without first thinking of Andonovski. Whether he was regaling us with stories about pulling Lauren Holiday off the USWNT bus to ask her about trading for Amy Rodriguez or just discussing the minutiae of women’s soccer, Andonovski has always been quick with a story and giving of his time.

Two Vlatko moments stand out for me (so far—he is still in NWSL). One was in July 2014. The team played the Western New York Flash to a 1-1 draw in Rochester. It was a respectable enough result but it was also a game FC Kansas City should have won. Andonovski came over to speak with a tiny group of media and when asked his thoughts on the game he smiled and said, “Well it was certainly better than last game.”

That last game was five days earlier when the Blues surrendered what is still a share of the NWSL record for goals in a 7-1 drubbing in Portland. Yet there was their head coach, cool and confident as ever and able to make light of a rough patch. (Again they would wind up league champions and the 7-1 loss snapped a 7-game winning streak, also tied for NWSL’s best.)

The second was at the 2017 draft. There was a media room set up in the back where coaches and players came for photo ops and then to be grilled by the press. Andonovski, who arrived at his first interview with FC Kansas City armed with binders of information about hundreds of potential draft picks, was thrilled with his day. He had ranked every player in the draft and come away with several of the ones he coveted most. “I can show you on my laptop,” he added.

Andonovski left the room, finished with his media duties for the day. Five minutes later he returned, open laptop in hand, to show the few of us remaining his list of players. At that moment there was not a happier or more excited person in the entire JW-Marriott.

(As it turned out, the draft did not have such great results in the short term as Toni Payne signed in Europe, Stephanie Ribiero tore her ACL, and Alexis Schaffer abruptly left camp. 1st round pick Christina Gibbons thrived though.) 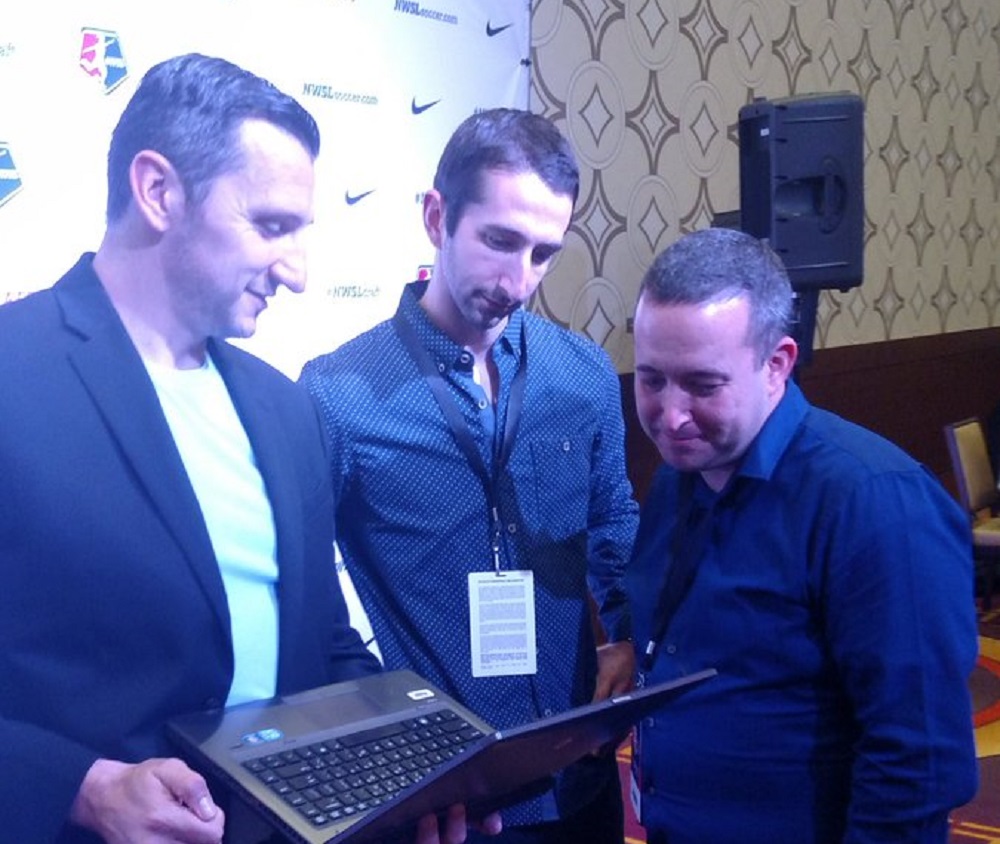 Many players stayed in Kansas City out of loyalty to Andonovski. Yael Averbuch touched on it in this blog post. The club may have ceased operations on November 20 but for many the soul was ripped out when the only head coach it ever knew walked away from a sinking ship to join the Reign.

As time fades and scars heal, it will be important to remember that many good people gave their time and energy to making FC Kansas City work. Jeff Husted was in charge of media relations for nearly all of the five years and was a pleasure to work with and to know. Many others–some paid, some not–put in countless hours of hard work in an effort to make women’s pro soccer succeed in Kansas City. At a time when we’re analyzing the business merits of the move or feeling bad for a fan base now without a team to support, spare a moment for those now looking for work, some of whom are in the process of packing up to move back home, or to move wherever life takes them next.

To everyone who played for, worked for, paid for, or otherwise sweated for FC Kansas City, thanks for the memories.