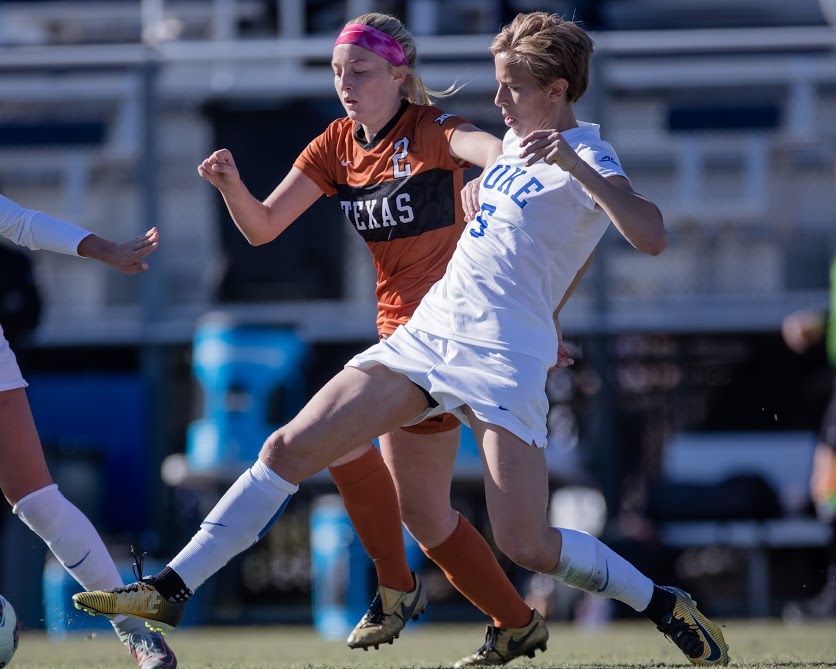 Canada’s Rebecca Quinn has been the linchpin in Duke’s success this season. (photo by Shane Lardinois)

DURHAM—Just when the games are supposed to be getting tighter, Duke keeps getting better.

There were 16 games played Friday in the NCAA women’s soccer championships. Four were decided by one goal, and five others went to penalty kicks. Duke won 7-0.

There were eight games played Sunday. Six were decided by one goal. Duke won 3-0.

The Blue Devils’ Friday night opponent, Oklahoma State, came to Durham, N.C., with a 16-4-3 record, having allowed more than two goals in a game just twice all season. Duke scored five times in the first half, including four in a 10-minute span between the 25th and 35th minutes.

On Sunday, Duke’s Imani Dorsey scored just 2:45 into the game against Texas, and the Blue Devils were on their way to a 3-0 win.

“They showed why they are one of the top squads in the country,” said Texas coach Angela Kelly. “They are very, very seasoned and have some great personalities. I think they have an opportunity to win the whole thing.”

Ten goals in two NCAA tournament games scored by six different players is more than enough to make the rest of the field take notice.

“We are a very confident team,” said head coach Robbie Church. “Since Day One, we have always created good chances, but our finishing has been better. And I think we are very sharp in front of the goal right now.

The Blue Devils (22-2-0) won the ACC regular-season title with a perfect 10-0 record but lost to North Carolina 1-0 in the ACC final. The Blue Devils opened NCAA play by outshooting UNC Greensboro 31-1, but needed a 70th-minute goal by Dorsey to advance.

What’s different about the loss in the ACC final, the first-round NCAA struggle and the dominance displayed in the second and third rounds? According to Church, it has a lot to do with one player.

“One of the reasons is Rebecca Quinn,” he said. “Having Rebecca back out there and able to connect us is important.”

Quinn, Duke’s senior midfielder out of Toronto, missed the ACC final and the UNCG game while playing all 180 minutes for the Canadian national team in a two-game series against the United States.

“It was a really tough decision to make,” said Quinn of her choice to miss the ACC final and Duke’s first NCAA match. “It was tough, considering the U.S. is one of the top teams in the world. and that’s where we are looking to be with the Canada national team.

“But the ACC Championships were one of three things we wanted to do this year. We wanted to win the ACC season, the ACC tournament and then the NCAAs. Missing the first round of the NCAAs, I mean our team can (win) that any day with or without me, so that wasn’t too bad.”

Slotting back into her role as the Blue Devil’s holding midfielder, Quinn expertly pulled the strings on the Duke attack against Oklahoma State and Texas.

“She makes a huge difference,” said Kayla McCoy, who scored two goals on the weekend, one each game. “She is just so good at attacking and slipping little balls through. She’s such a threat, defenses have to adjust to her. It’s been awesome having her back. Obviously, with the Canadian national team she is doing big things, but it’s great when we have her here.”

Next up for Duke is Baylor, who used a 98th-minute goal by Precious Akanyirige to get past Notre Dame 3-2 Sunday. The game is scheduled for Friday, Nov. 24 at 5 pm at Duke’s Koskinen Stadium.

“I’m just glad we’re home,” said Church. “That’s the only preference we have. We’ve been on the road a lot in the final eight. I think this is only the second time we have been at home. The final eight is always a very hard game and a very tricky game because you are only 90 minutes away from the Final Four.”

Baylor, who knocked off defending national champion Southern Cal in the second round will bring a 15-4-3 record to Durham. The Bears have allowed just 16 goals all season and have posted 13 shutouts, three fewer than Duke.

“We can’t worry about the opposition too much,” said McCoy, who is tied for the team lead in goals with 13. “We just have to stay hungry and keep the mentality that we have to play really well to win these games. This weekend has definitely been a confidence-builder for us. We haven’t scored a ton of goals like that this season, so it’s exciting to see that we are able to finish, and it’s great to see our hard work pay off.

“I definitely think it’s a statement to the rest of the tournament that we are a team to watch.”

Church believes there’s still more his team can do.

“I’ve said all year long, even when we’re winning, we can still get better, and I think we’re getting better,” he said. “We’re believing in ourselves and how we want to play. We’re putting our will on a lot of people.”