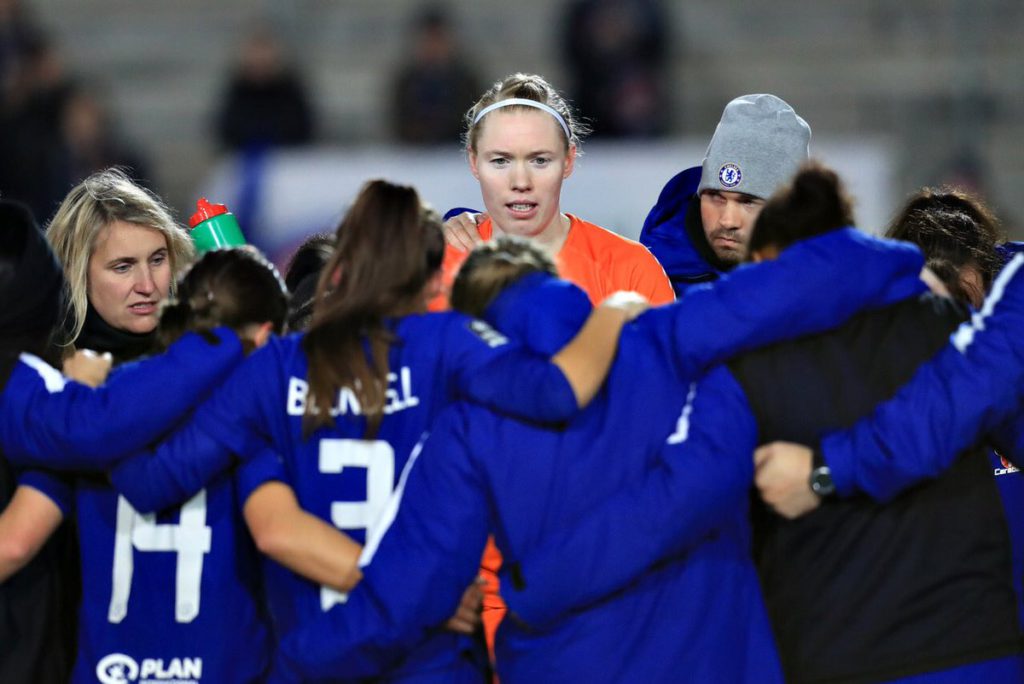 One goal was more than enough to see Chelsea through to the quarterfinals of the UWCL for the first time.

Chelsea pushed their way into the quarterfinals for the first time while perennial contender Lyon showed no mercy despite a lopsided opening leg. The latest from UEFA Women’s Champions League 2nd legs from the Round of 16:

Rosengard 0, Chelsea 1 (0-4 aggregate): Ji Soyun scored the only goal of the day to make Chelsea winners but it was mostly a formality as the Emma Hayes’s side moved comfortably into the last eight. It will be Chelsea’s first appearance in the quarterfinals of the world’s most prestigious club tournament for women. Crystal Dunn went the full 90 for the winners who dominated all of the statistical categories on the day.

Lyon 9, BIIK-Kazygurt 0 (16-0 aggregate): Leading 7-0 on aggregate after the opening leg, Lyon showed no mercy, adding another nine for a 16-0 beat down on the aggregate. Ada Hegerberg and Camille Abily both had hat tricks with Hegerberg netting four to give her eight goals over the two legs. Amel Majri and Delphine Cascarino also scored for the two-time defending champions.

Barcelona 3, Gintra 0 (9-0 aggregate): Barcelona added three goals to the half dozen they scored last week in Lithuania to cruise into the final stages. Alexia Putellas opened the scoring and Toni Duggan made it 2-0 near halftime. An own goal from Ana Alekperova completed the scoring.

Wolfsburg 3, Fiorentina 3 (7-3 aggregate): Fiorentina rallied twice to earn a surprise draw on the road but it was not nearly enough to dig out of the four-goal deficit they kicked off with. Ellie Jade Brazil scored the final equalizer in the 81st minute. Precellia Rinaldi had equalized earlier in the half and it was Ilaria Mauro who scored in the 2nd minute to stake the Italians to an early lead. Tessa Wullaert scored in the 30th minute when she followed her own penalty miss and made it a brace two minutes later to put Wolfsburg on top for the first time. Sara Bjork Gunnarsdottir entered the match in the 70th minute and scored Wolfsburg’s third in the 71st.

Linkoping 3, Sparta Prague 0 (4-1 aggregate): In a match that saw the teams combine for 35 shots, Linkoping scored twice in the final 15 minutes to put the tie away. Following an even opening leg, Lina Hurtig put the Swedish side ahead in the 18th minute. Still the result hung in the balance until Kristine Minde struck in the 78th minute and Nicoline Sorensen added the final dagger in the 86th.

Swedish players come to new agreement with their Federation

Sweden have struck a deal with the federation to improve pay and working conditions.

Today, a new agreement was reached between Sweden women’s national team and the Swedish Football Association.

Recently, the Sweden women’s national team was yet another women’s team in negotiations with their federation for improved pay and conditions, in line with what the men’s side receives. As of yesterday, and after a year of negotiations with no tangible result, the team made the decision to boycott the upcoming Football Awards Show as well as their friendly against France set for November 27. However, with the new agreement in place, it appears that a result that both sides are happy about has been agreed upon.

Håkan Sjöstrand, Secretary General Swedish Football Association, noted that although the negotiations took some time, the federation feels good about where things have netted out. “To us it is extremely important that the players feel they are appreciated, so of course it is very nice to now have an agreement in place that they both and we are very pleased with,” he said. “It has taken time, but the important thing is that the end result will be good. Now we put this debate behind us and focus on new victories for Swedish football.”

Sweden’s top players also chimed in regarding their relief at signing a new agreement, careful to note all the hard work that was put in to get to this point. Veteran midfielder Caroline Seger said that she “feels incredible relief that the agreement is complete. It has been a long process for all parties. Glad we can now move on and focus on the sporting game. Now we are all looking forward to a fantastic football gala where Swedish football will be celebrated.” The gala in question refers to the upcoming Football Awards Show that the team was prepared to boycott if an agreement wasn’t able to be met. Seger’s co-captain, Lotta Schelin, also echoed a similar response. “At last we can put all this behind us. I am very pleased that the Swedish Football Federation is meeting us,” she said. Now there are better conditions for Swedish national players, we needed it. I’m proud of everyone who has been involved in this process.”