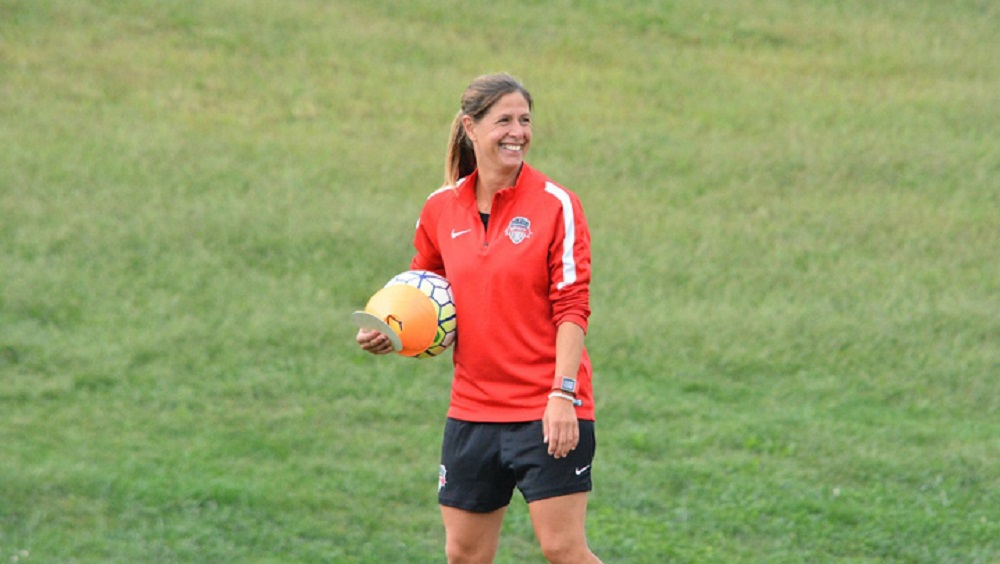 Denise Reddy has been named head coach of Sky Blue FC. Reddy has many ties to the area. A New Jersey native, she was an All-American when she played at Rutgers and was one of the founding members of the Sky Blue coaching staff when the club launched in the W-League in 2006. She has been an assistant with the Chicago Red Stars in WPS and for the last two seasons with the Washington Spirit. She has previous head coaching experience in Sweden and Denmark.In 2011, Reddy guided Linkoping to the quarterfinals of the UEFA Women’s Champions League.

“I’m extremely excited and honored to be representing Sky Blue as the new head coach,” Reddy said during an introductory conference call on Wednesday. “I feel Sky Blue has a young and exciting roster with a tremendous amount of quality.”

Reddy becomes the only female head coach in NWSL. Laura Harvey held that distinction the last four seasons before stepping down as Seattle Reign FC manager last week. The Houston Dash and FC Kansas City continue to have coaching vacancies.

“Of course I’m going to do everything I can to support females whether it’s players who want to go on and be head coaches or females that are trying to get to the next level in the coaching realm,” Reddy said. “I want to be a big part of the support system for females. I don’t know if I’m going to feel any pressure. I’m going to coach the same way whether it’s all females or whether I’m the only one.

Sky Blue have not made the playoffs since 2013. A promising start to the 2017 season eroded during a summer of poor defense and an eventual coaching change that saw Christy Holly replaced by a group of four assistant coaches led by Dave Hodgson. The highlight of the season was Ssam Kerr who scored a league-record 17 goals and became the first NWSL player with two hat tricks in the same season. For her efforts she was named NWSL Most Valuable Player.

Looking ahead, Reddy said the key to her coaching influence will be developing the club’s soccer identity. “What I would like to bring is a more identifiable style of play both on and off the ball that can fluctuate in and out of specific playing systems. And then when I get to start working with the players, the technical, the tactical, the mental, and the physical. Then we can say more specifically, this is going to be out style. So until I get in there and start working with them I can’t be more specific about that.”

Reddy becomes the third full-time Sky Blue coach in the NWSL era. Jim Gabarra built the club and took them to the playoffs in 2013. He then missed the playoffs in 2014 and 2015 before leaving for the Spirit. Holly was named coach for the 2016 season.

Gabarra, now coach and general manager of the Spirit, offered his congratulations both via Twitter and a club release.

“When Denise came to the Spirit, we were all aware of and supported her ambition to become a head coach in the NWSL,” the release said. “She has been a tremendous resource for our club the past two seasons and instrumental to our success. This is a great opportunity for her, and we wish her the best of luck with Sky Blue.”