USWNT looks to close out ‘tough’ 2017 with win against Canada 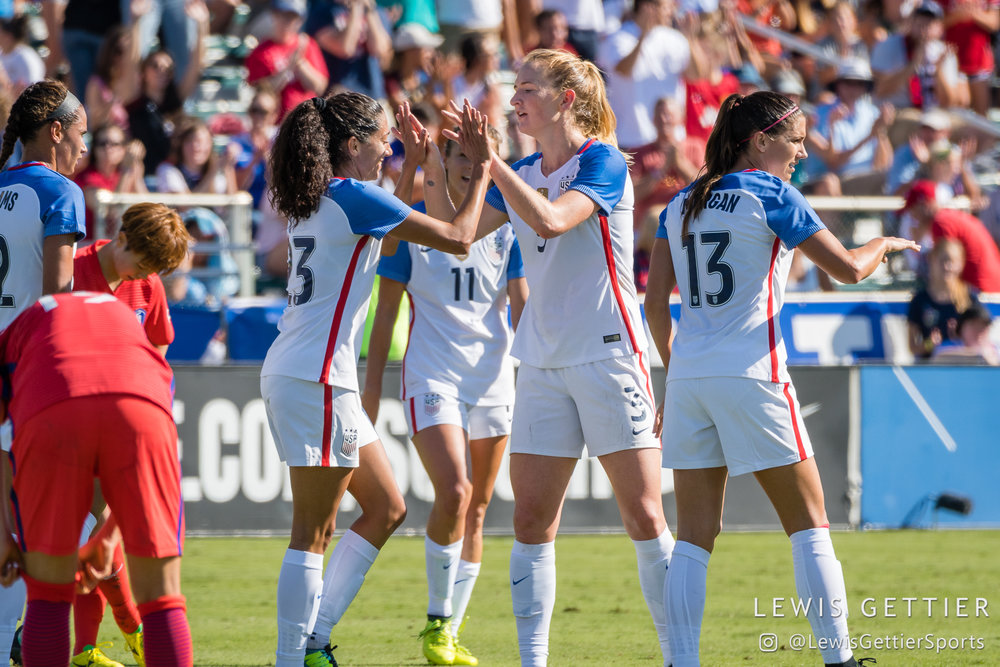 The USWNT will look to end 2017 with a win against rivals Canada. (photo by Lewis Gettier)

VANCOUVER, B.C – The U.S. were the second best team on Thursday night at B.C. Place, and they’re going to have to be a whole lot better if they want to end 2017 with a win. We’ve grown accustomed to watching the U.S. dominate opponent after opponent. It was an uncharacteristic surprise to see Canada with wave after wave of scoring opportunities.

“It’s really important for us to finish with a win,” Alex Morgan said post match. “This year has been really difficult in terms of the results and the competition that we’ve played. For us to get a win would be good—going into the offseason and to have a couple of weeks break, feeling a little more confident. We have a good record against Canada. We know that they’ve definitely climbed the ranks, but we want to keep this momentum on our side and definitely end on a high note.”

By no means does U.S. Soccer hold a poor record against Canada (47-3-7), nor do they hold a sub par record this calendar year (11-3-1). However, when you realize the high standards that the players, fans, media, and U.S. Soccer have set, any little hiccup causes alarm bells. Megan Rapinoe took paused before summarizing what kind of year it’s been.

“I think it’s been tough,” Rapinoe admitted. “Obviously we had a lot of very tough fixtures because we have a lot of new players in. I think we’ve played three or four different systems this year. It’s been hard to really get that consistency that we need, but that’s what this year is for, really. I think that was sort of the point of it. It’s been tough, it’s been challenging. We’ll take everything we’ve learned from this year and really be able to hone in the next couple of years.”

While it is important to bring in younger players to the U.S. Soccer environment, it’s also expected that the team keeps on winning and running like a well-oiled machine. That’s just not realistic when trying new formations, tactics, and player personnel. Bumps along the road are inevitable. Although fans don’t want to hear it, it’s about “trusting the process.”

“Yeah, that’s a huge part of it,” Rapinoe said, when asked about the process. “Just understanding that there’s a bigger picture. Sometimes for the player, you can just only control what you can control, and that’s part of it as well. Focusing on your game and trying to bring a consistency to the team and to your club team that you can and understanding that other people are in charge of the bigger picture.”

The likes of Canada, the Netherlands, Germany, England, France, Sweden, Brazil, and quite frankly, any other national team, would be over the moon with the year that the USWNT has had. When you’re number one FIFA ranked though, three losses and a draw doesn’t cut it.

The Seattle Reign FC midfielder admits the results have been a bit of a shock. “Yeah, it’s surprising,” Rapinoe said, “especially with some of the performances we’ve put in. It’s more the performances than anything. There’s been a lot of change over, and that was sort of the point of this year. With the quality of the squad, the depth of the pool that we have, I don’t think we should ever lose. I always feel confident in our squad no matter where we are.”

You just know that John Herdman would love to have his team come into Avaya Stadium on Sunday night and leave with a resounding win over their arch rivals. The U.S. won’t make it easy. They have a lot to play for. This is a proud team that will make adjustments and come back ready for the red and white. How much would a win mean?

“[It’s] very important, you always want to win,” Lindsey Horan said post-match. “Of course we wanted to this game. It always kind of feels like a loss when you tie. This next game, we want to go out with a win, especially in front of our fans in our home country.”

Canada has an opportunity to send the U.S. into uncharted turmoil. Confidence can be a fragile thing, and based on Thursday’s match, Canada left Vancouver with all the momentum and ambition to finish what they started. It’s up to the U.S. to return serve.