Julie Ertz on her transition from center back to bruising midfielder 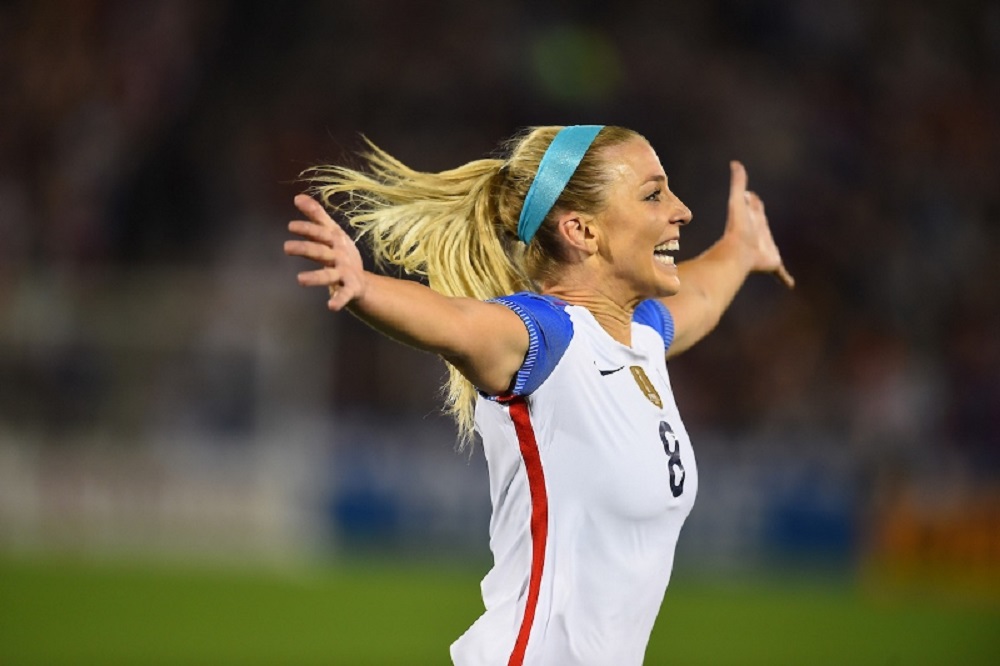 Julie Ertz has accepted her new role as a midfielder with arms wide open.

VANCOUVER, B.C – U.S. Soccer is taking shape, and looking to the future, giving younger players an opportunity, trusting the process, and finding the best formula to keep the winning tradition alive.

Julie Ertz has found herself in a new spot. The durable center back that had an outstanding 2015 World Cup, has moved on up, to the midfield. Playing in a further advanced position is already showing to be a smooth transition for Ertz,

“I really enjoy it,” Ertz said, following training in Vancouver on Wednesday. “It’s nothing too new, in the sense that I’ve played midfield in college most of my time there. It’s definitely been a new challenge, it’s been fun and exciting. A little bit more opportunity, obviously to get closer to the goal. I’ve had a fun time, and I’m still learning.”

The 25 year-old landed in her new spot with the U.S. national team after a chance opportunity with her club team, Chicago Red Stars. Coach Rory Dames was looking for someone to step up in the midfield. Ertz’s experience at Santa Clara University put her in a position to succeed.

“It kind of started through NWSL, and with what my team needed there,” Ertz revealed. “We sat down to see how I could help, and what we needed in that regard. We were down midfielders through injuries, and player personnel. That’s how it started through a few games at first, and it ended up being most of the season. I guess they liked what they saw in shifting to a 4-3-3. We had more of a true six role, which is what I’ve been most in my career prior to the national team. It was a shift that happened at a random time.”

Not only is Ertz showing that she can play on both sides of the ball, but she’s also contributing on offence. She scored in back-to-back matches vs South Korea last month and will look to continue her form against Canada. Having someone in the middle who is a ball magnet, but can also switch gears offensively hasn’t gone unnoticed by Megan Rapinoe.

“She’s very disruptive, good in the tackles, all over the field,” Rapinoe said. “She gives us that sort of break up player in the midfield. At times during the year, we’ve been exposed through the middle, and on the counterattack, or through our own turnovers. In a lot of sense, it’s almost like she’s a center back playing that role, because she is. I think she’s settling in to it. Having her further up the field, she scores goals way more than I do.”

The Mesa, Arizona native, has 55 caps, and 13 goals to her name. All of her goals have come directly from, or as a result of, a set play. Ertz is proving that she is able to adapt and play wherever Jill Ellis needs her. It’s one of the reasons why Ellis relies on her so much.

“J.J (Ertz’s maiden name is Johnston), that’s someone you’re going to lean on in a game,” Ellis said. “I always call J.J. my warrior. She’s a warrior, and add to that a level of now, productivity. Obviously, scoring goals, understanding playing in that position. Even when she was playing center back, J.J. just has a lot to offer. I think she’s pivotal for us right now, in terms of growing in our system. We’re continuing to improve, and refine, and it’s something that I think she’s handled incredibly well.”

Having the pace, vision, and creativity to play in the midfield is vital. Responsibilities have shifted, from having to track the oppositions top strikers, to having to move the ball faster, think the game differently, and realize when it’s time to go forward and attack.

“It’s a different type of reading the game,” Ertz admitted. “It’s definitely quicker. Obviously when you’re in the middle of the field, you have less time on the ball. I think that’s been the biggest change, the speed of play in the middle is obviously a little bit faster than in the back. Other than, that, it’s defense first, attacking second as you kind of sit more in the defensive role.”

The early returns are positive. Ertz is becoming an important piece of the midfield puzzle. Ellis trusts her to make quality plays on the pitch, and help equally on offense and defense. She’s given Ertz the green light to decide when it is that she wants to get forward. That’s always the best way an athlete can get comfortable in a new position.

“I feel like we’ve got in a ton of freedom towards the end of 2017 to learn, and use this year to help prepare us for 2019,” Ertz added. “I do feel like I have the freedom to go forward. The eight, and the ten, do a phenomenal job to cover, and we’re learning.”

It’s certainly not a new experience for Ertz, but more of a chance to show what she can do in the midfield, on a regular basis, at the senior level. You can call in a re-shuffle to try to get the best out of Ertz, and her teammates around her. The U.S. has another secret weapon ready to contribute, and thus far Julie Ertz is up to the task, and then some.

USWNT vs Canada: Can northern rivals finally close the eternal gap between the sides?
Thursday Roundup: Manchester City latest to score huge away win in UWCL Round of 16