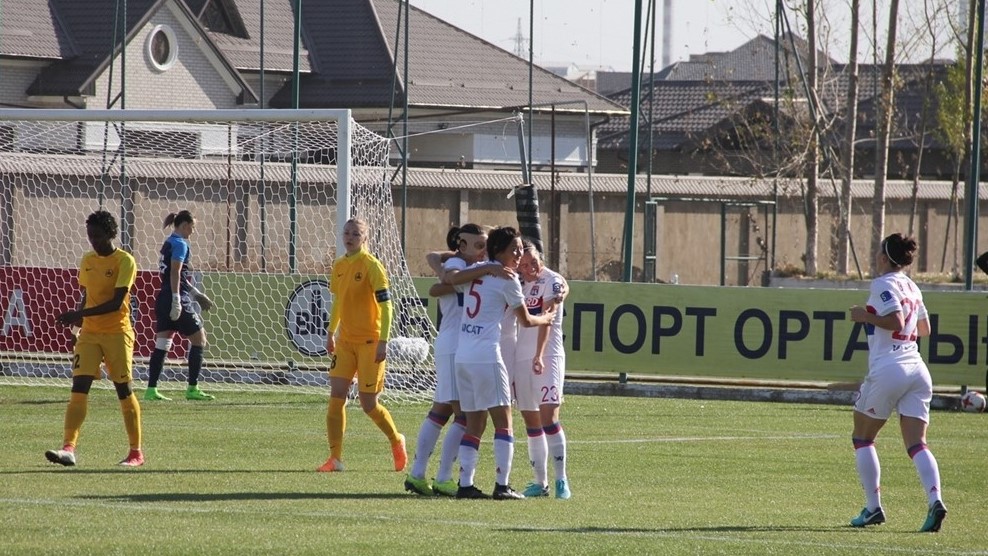 Lyon and Barcelona both posted lopsided away wins and Chelsea hammered FC Rosengard 3-0 at home as Round of 16 action got underway in the UEFA Women’s Champions League. Here is a quick look at Wednesday action:

Chelsea 3-0 FC Rosengard: Chelsea dominated from the get-go and after taking a 1-0 lead to halftime, added two more in the second to make the most anticipated tie of the Round of 16 a bit lopsided at the halfway mark. Fran Kirby gave the FAWSL leaders the lead on 33 minutes and the second half goals came from Ramona Bachmann and Gilly Flaherty. Ella Masar went the distance for Rosengard in what is her final stretch with the club. She recently turned down a contract offer after the club did not extend the same to her wife Erin McLeod. McLeod was the backup keeper on the day.

BIIK-Kazygurt 0, Lyon 7: The champions of Kazakhstan were no match for the tournament holders and perpetual French queens and now face what is essentially an impossible task for the return leg. Ada Hegerberg scored four times, and her 19th minute penalty staked Lyon to an early 2-0 lead. Camille Abily scored just before halftime and Amel Majri scored just after and the route was on. Hegererg’s third, in the 73rd, was followed up two minutes later by Eugenie Le Sommer before Hegerberg added yet another in the 90th.

Gintra 0, Barcelona 6: Five different Barcelona players scored to stake the Catalonian side to what is likely an insurmountable lead coming home. Mariona Caldentey had the brace and was joined on the scoresheet by Aitana Bonmati, Toni Duggan, Olga Garcia, and Natasha Andonova. Duggan, Garcia, and Andonova were the three subs in the match.

Sparta Prague 1, Linkoping 1: In what turned out to be the most competitive match of the day, Sparta and Linkoping traded goals in the opening quarter hour of the second half to set up an enticing second leg in Sweden. Kylie Allissa Strom put the hosts ahead in the 47th minute before Lina Hurtig leveled it in the 54th. The shot stats showed an even match as well with the hosts ahead 13-10 on total shots and the attempts on goal even at six apiece.

Brescia 2, Montpellier 3: Montpellier came from behind twice and then got out of town winners on the day through captain Linda Sembrant. Brescia’s captain Cristiana Girelli scored two goals, both to give her side the lead, but Stina Blackstenius and Janice Cayman came up with equalizers. Cayman’s came five minutes after Brescia went ahead 2-1.

Fiorentina 0, Wolfsburg 4: After a scoreless opening half, the 2013-2014 winners exploded four four goals to grab a comfortable lead heading home. Sara Bjork Gunnarsdottir scored the first and third goals with Pernille Harder and Alexandra Popp also in on the fun.