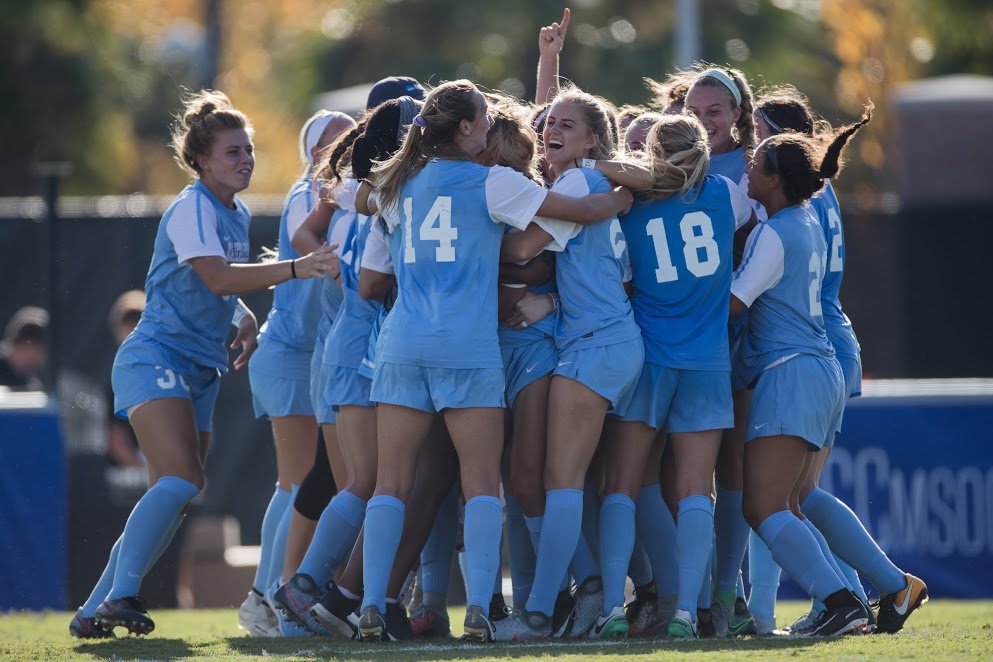 The two teams previously met in their 2017 season opener, which North Carolina won 2-1 in overtime. It would be the only loss Duke suffered all season, staying perfect for the rest of their 2017 campaign, including in conference play to be crowned ACC regular season champions. Despite their success during the regular season, Duke couldn’t capture the tournament title as well, falling yet again in the championship match. Sunday was the Blue Devils’ fifth trip to the tournament final and their fifth loss.

As with both teams’ semifinal matches, the first half remained scoreless, but that wasn’t for lack of effort from either team. The two teams went into halftime with five shots apiece, although only UNC had put any shots on target, forcing Duke goalkeeper E.J. Proctor to make two big saves early in the game to keep the game knotted at zero.

The first save came in the fourth minute when defender Julia Ashley put a header on frame that Proctor redirected off the post and out for a Tar Heel corner. In the 16th minute, Proctor was once again put to the test, this time by Zoe Redei, who had snuck behind the Duke backline and into space to get on the end of a long ball. The Blue Devil keeper was able to make the stop, denying Redei’s header attempt on goal.

In contrast, North Carolina keeper Samantha Leshnak didn’t have much to do until the final minute of the first half. Morgan Reid sent a dangerous cross into the box, forcing Leshnak to come off her line in attempts of collecting it. In doing so, she collided with Duke’s Kayla McCoy, who was going up in attempts of heading the 50/50 ball. Leshnak wrapped an arm around McCoy’s neck in order to come away with the ball, taking McCoy down to the pitch in the process. Duke’s sideline wanted a foul called on Leshak, but none was made and the game went into halftime still knotted at zero.

Proctor was able to deny Redei in the first half, but couldn’t do it again in the second half, allowing the sophomore forward to put UNC on the board. Redei scored on a play that originated with a throw in, which Alessia Russo—who scored the game-winning goal in the Tar Heels’ semifinal win over NC State—first tried to shoot into the back of the net, only to have her shot deflected and fall to the feet of Redei. Redei made a short run on goal and blasted a shot past Proctor to break the deadlock in the first minute of the second half. The goal was the second of the season for Redei, who also scored in UNC’s 2-1 quarterfinal win over Florida State.

It’d be more than three-fourths of the way through the match before Leshnak tallied her first save of the day when Ella Stevens fired off a shot on frame, but the UNC keeper was able to make the catch to prevent the high shot from dipping under the crossbar.

Duke nearly equalized in the 82nd minute when a long ball over the top was sent for McCoy, who was unable to get to the ball before it was knocked free by a North Carolina defender. Dorsey ran onto the ball and settled it with her head, cutting inside to the box where she ran into McCoy and lost possession. McCoy played the ball back to Dorsey, who fired off a shot only to send it just high and wide of the far post.

Leshnak was once again put to the test in the 86th minute when Dorsey used her speed to outpace her defender and move the ball into the Blue Devils’ final third before connecting with Karlie Paschall, who put a hard shot on target that Leshnak stopped with a two-handed stop. The ball deflected back into play, but Duke couldn’t capitalize on the rebound, and the ball was eventually cleared from danger.

As the final seconds of the game ticked on, freshman forward Sydney Spruill made a run on goal and knocked the ball into the back of the net to celebrate UNC’s Championship win with what appeared to be a goal of her own, but the goal came after the final whistle, and the game ended 1-0 in the Tar Heels’ favor.

Both teams will now look forward to the NCAA tournament, which will get underway next weekend. The ACC powerhouses have clinched a spot in the tournament and will likely both be seeded, but they will not find out for sure until Monday’s selection show, which gets underway at 4:30 p.m. ET.