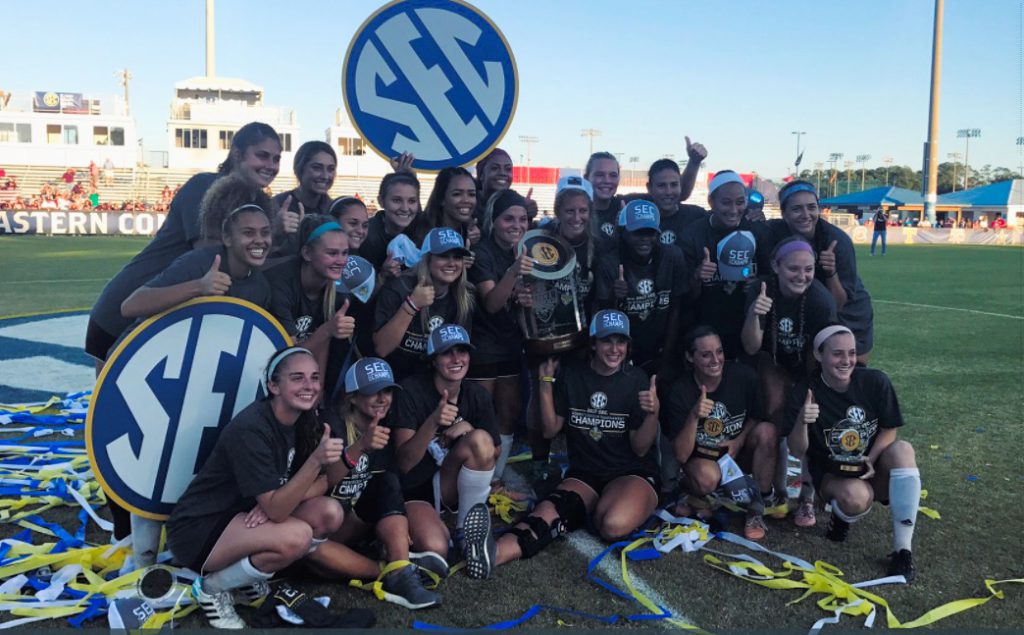 Texas A&M pose for pictures following their 2-1 SEC Championship win over the Arkansas Razorbacks. (photo courtesy of the SEC)

An 88th-minute goal by junior Emily Bates was the difference maker in Texas A&M’s 2-1 win over Arkansas, earning the Aggies their third SEC Championship title. A first-half Arkansas own goal looked poised to be the game winner, but the two teams exchanged a pair of goals late in the second half with A&M having the final say to take home the biggest victory in a 13-game winning streak.

Tori Cannata was the first player to get on the score sheet, but not the way she or her Arkansas teammates would have preferred, scoring an own goal to give A&M the lead in the 37th minute. Cannata made a sliding attempt to knock Stephanie Malherbe’s cross out of bounds, but she got her angle wrong and instead knocked it past Razorback goalkeeper Jordan Harris and into the back of the net for the own goal.

Cannata’s goal remained the only goal of the match until late in the second half, when the Razorbacks switched from a defense-heavy formation to a more attacking-minded one in attempts of overcoming the one-goal deficit. They were successful in the 81st minute thanks to freshman Parker Goins, who scored off a throw in inside of Arkansas’s final third that the Aggie defense failed to clear. The ball ping-ponged around the box before bouncing to Goins, who chested the ball before blasting her shot into the back of the net for the equalizer.

As the clock continued to tick down, the intensity of the game reached an all-time high as both teams tried to avoid overtime with a late game winner. Both teams put shots on frame following Goins’ goal, but ultimately it was Emily Bates who saved the day for the Aggies, retaking the lead for Texas A&M in the 88th minute. Malherbe connected with Bates on the outside, and the sophomore attacker beat senior defender Hannah Neece to move into space and send a low shot past Harris and into the far side of the goal for the championship-winning goal.

The two teams will now await their fates in regards to the NCAA tournament. The Aggies automatically received a bid with their SEC Championship win on Sunday, but the Razorbacks will almost certainly receive a bid as well. The selection show for the 2017 NCAA tournament will take place Monday at 4:30 p.m. ET and will be streamed live on NCAA.com.