Yesterday’s semifinal action saw a lot of overtime and a couple of upsets as the no. 5 seeds in both tournaments, Penn State and Baylor advanced over no. 1 seeds Ohio State and Oklahoma State respectively.  Here’s a recap of yesterday’s action in the Big Ten and Big 12 ahead of tomorrow’s championship finals. 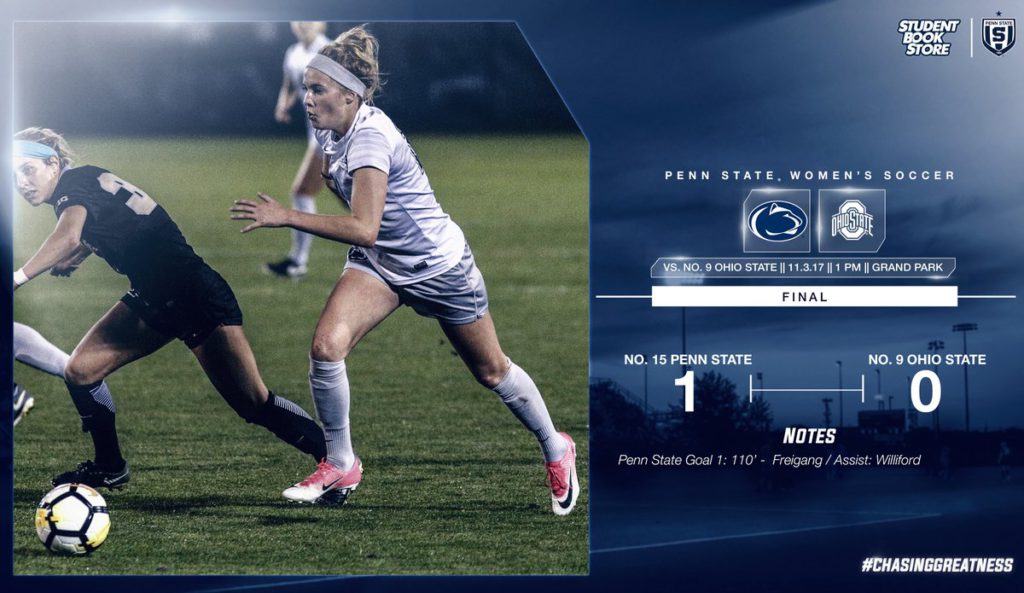 For the second straight contest, the Nittany Lions manage to advance despite not scoring in regulation. Penn State did avoid penalties yesterday, unlike its quarterfinal victory over Rutgers. Laura Freigang broke the deadlock with less than a minute left in the second overtime period.  The assist was credited to Salina Williford. On the tally, Williford played a ball into through the Ohio State midfield to Freigang. Freigang took a couple touches and then took a shot from just outside the box.

Through 109 minutes played, Ohio State failed to record a shot on goal or a corner kick.  The Nittany Lions ended the game with a 9-0 advantage in the shots on goal category.  Despite the lopsided game the Buckeyes defense nearly withstood the offensive pressure from the Nittany Lions. Ohio State keeper Devon Kerr, who was recently named to the All-Big Ten second team recorded 8 saves in the contest. The Buckeyes, the regular season champions, will now wait for selection Monday.  The Nittany Lions now advance to the conference final on Sunday to play Northwestern.

Maria Fayeulle’s first strike of the year put the Wildcats into the conference final for the first time in two decades. Halfway through the second period of overtime, Fayeulle managed to elude two Wisconsin defenders bury the ball into the back of the net.

Fayeulle’s game-winner came 100 minutes after Wildcat center back Hannah Davison opened the scoring in the 5th minute of play. Davison’s tally came in traditional Northwestern style – off a set piece. Marisa Viggiano’s excellent service on a free kick found Davison who headed it into goal. The stalwart Wildcat defense silenced the Badger offense despite the Badgers enjoying more of the possession.

Wisconsin was able to generate more dangerous opportunities with their edge in possession during the second half. A few minutes later, 30 to Murtha failed to put the header on frame. Twenty minutes into the half, Lauren Rice knotted the game at one. Sophomore Dani Rhodes got around three Northwestern defenders to serve the ball into the box. Rice ran onto the ball and put it away for the score.

Neither side was able to break the deadlock through regulation and the first period of overtime. Halfway through the second period of overtime, Senior Maria Fayeulle managed to elude two Wisconsin defenders and record her first strike of the year. Northwestern will look for its first conference tournament title Sunday. 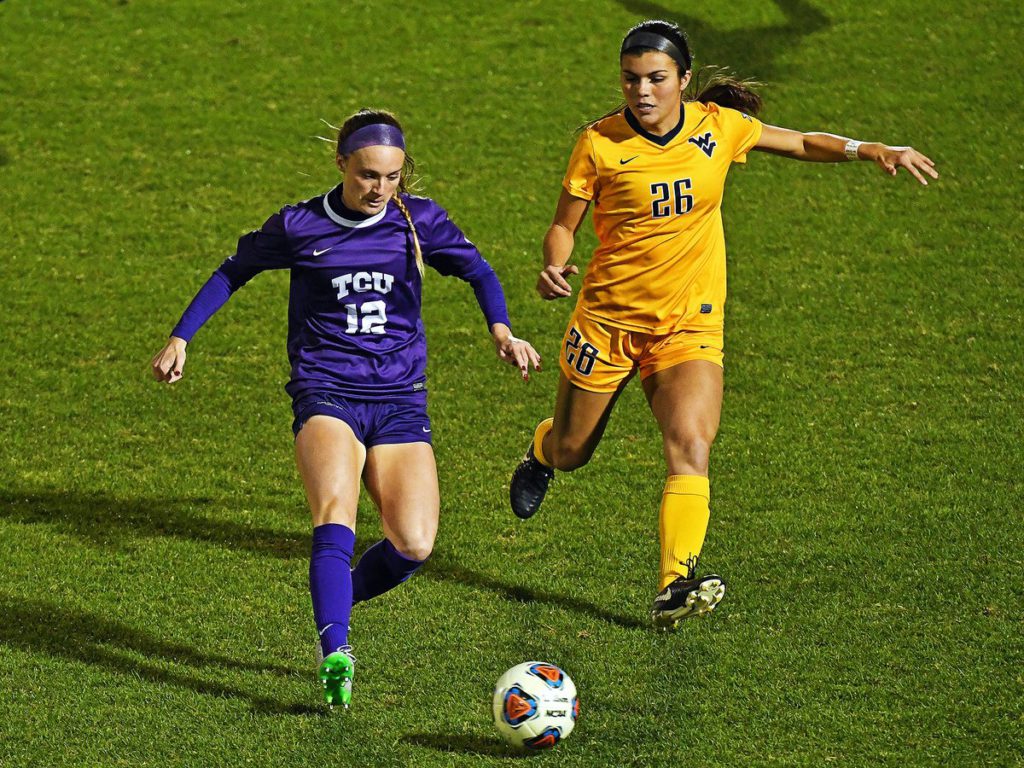 Brazilian Aline De Lima played a role in all three goals scored as the Bears easily defeated the no. 1 seed Cowgirls 3-0. De Lima scored the first and the final tallies and assisted on the second.

In the 10th minute, De Lima dribbled up the field, juked a defender and fired a shot into the upper ninety for the game-winner. Baylor put a lot of pressure on the Cowgirls in the first half but were unable to add to their lead.

Throughout the game, the Bears held the no. 1 seed Oklahoma State to just a handful of chances including a couple of long distance shots that went wide of the net. The Cowgirls managed just two shots in the first half and only three in the second. Only one of those five chances were on target.

Baylor added an insurance goal in the 77th minute. De Lima tracked down a second ball in the middle of the pitch and then laid it off to Ariel Leach on the left side of the field. Leach then finished far post for the tally. With Oklahoma State committing numbers forward in the final minutes of the match, De Lima was able to add a second as she dribbled up the field and finished with her left foot. The Bears advance to meet TCU in the conference final.

Yesterday, the second and third seeds in the Big 12 Conference faced off in a rematch of last year’s conference final. In regulation, the match played out much the same as that previous meeting with TCU leading and then the Mountaineers pulling even late. In last night’s contest, however, the Horned Frogs wrote a new ending. After the match couldn’t be decided in 110 minutes, TCU emerged victorious converting all five penalties taken.

Both of the tallies in the affair came off corner kicks. The Horned Frogs took the lead in the 52nd minute off a corner kick taken by senior Emma Heckendorn. Heckendorn’s kick traveled to the opposite side of the box where it was headed to forward by Ariana Owens. Allison Ganter was able to get her head on Owens’ ball and send the ball over the line.

West Virginia pulled even off an olimpico by Amandine Pierre-Louis in the 78th minute. Pierre Louis’ kick swung into the net near the far post. Initially, Heather Kaleiohi was credited with knocking the ball over the line but replay revealed that Pierre-Louis’ effort had crossed the line without assistance.  The game-tying goal was set up by a miscue by TCU keeper Katie Lund when she let a ball sent into the area nick her unnecessarily.

Lund would redeem herself in the ensuing penalty shootout as her save on Vanessa Flores’ attempt proved to be the difference. The physical, fast-paced game came at a heavy cost for the Horned Frogs as both Heckendorn, who is vital to the team’s cause, and Tara Smith exited with injuries. TCU will now face Baylor in the conference final Sunday.