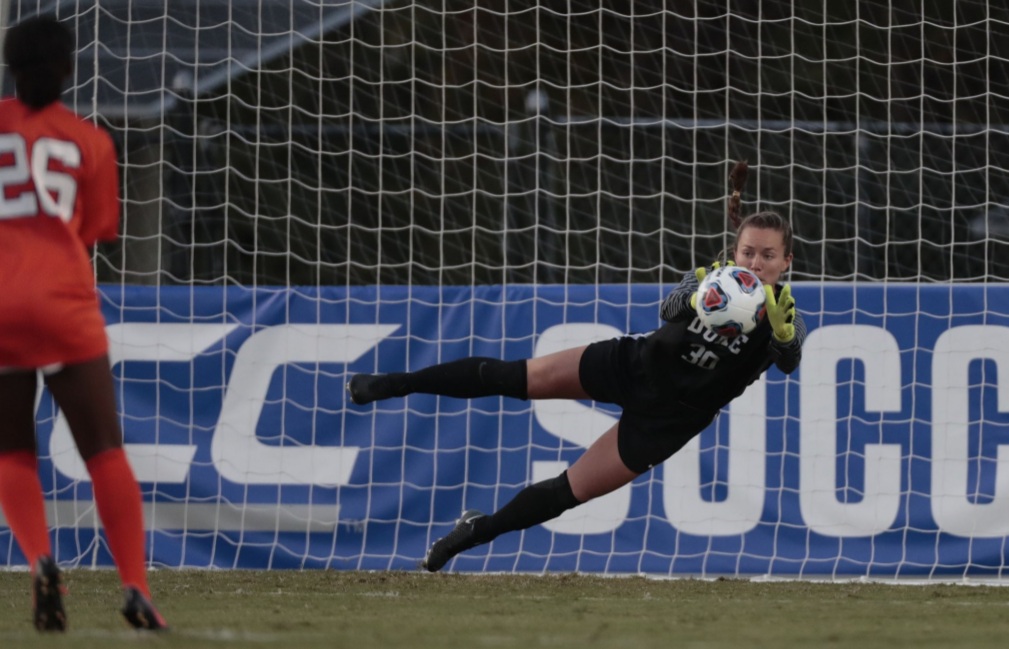 Duke goalkeeper EJ Proctor makes a diving save in the first half of the Blue Devils' semifinal win over Virginia. (photo by Shane Lardinois)

Duke and North Carolina will end conference play the same way they began it: by facing off against each other. In that meeting, UNC handed Duke a 2-1 overtime loss, the only Blue Devils loss on the season. On Sunday, the two ACC powerhouses will compete in the ACC Championship match, with the victor being named the 2017 ACC tournament champion. The two teams won their respective semifinal matches by 1-0 scorelines, courtesy of early second-half goals. Here’s a recap of Friday night’s ACC semifinal action.

Sometimes all you have to do is use your head.

Reigning ACC regular season champions Duke got off to a slow semifinal start against Virginia, failing to register a single shot in the first half, marking the first time all season that a half lacked a Blue Devils shot. As a result, Virginia was by far the more dominant attacking team in the opening 45 minutes, outshooting the Blue Devils, 7-0. Four of those shots were put on goal, forcing Duke’s E.J. Proctor to make a number of big saves to keep the Cavaliers off the board.

Virginia’s Laurel Ivory wasn’t as lucky, giving up a goal in the opening minutes of the second half off of Duke’s first shot of the match. In the 47th minute, a foul set up a Duke free kick near midfield. Schuyler DeBree, recently crowned the ACC Defensive Player of the Year, took the set piece, sending in a long ball right in front of the net, which Chelsea Burns played with a bouncing header across goal for Ella Stevens. After a split-second hesitation, Stevens ducked for the low header, bouncing her shot past Ivory and into the back of the net for the eventual semifinal winner.

Duke nearly doubled their lead moments later, with ACC Offensive Player of the Year Imani Dorsey sending in a dangerous cross in front of the goal mouth for Kayla McCoy, but it was just a step ahead of McCoy’s sliding attempt at knocking it in.

Although Duke’s offense came to life in the second half, taking 11 shots (6 SOG) in the final 45 minutes, it was Proctor’s overall performance on the night that was most astounding. The senior ended the night with five saves, including a spectacular second-half save on a soft bouncing shot that took an awkward bounce and nearly redirected into the goal. However, the senior netminder dove near post and swatted the ball away to prevent a last-minute Cavalier equalizer.

With the win, Duke eliminated Virginia and returns to their first ACC Championship match for the first time in 17 years, where they will play for first ever tournament title.

Alessia Russo strikes from distance to give the Tar Heels the victory over NC State! pic.twitter.com/Iy3Xt8j4V8

ACC co-Freshman of the Year Alessia Russo’s second-half long-range strike was the difference maker in the second semifinal of the night, lifting the North Carolina Tar Heels past North Carolina State, 1-0.

The two teams did not meet during the regular season, and their semifinal meeting was the first time since 2006 that the in-state foes met in the ACC tournament. The two teams last met up on September 17, 2016, which NC State won, 1-0. If that Wolfpack victory was in the back of either team’s mind, it was hard to tell, as both teams battled to the second scoreless first half of the night. UNC outshot the NC State, 4-1, in the opening 45 minutes, forcing Sydney Wooten to make one save.

The Tar Heels came out of halftime eager to get on the board, and they were able to successfully do so just 10 minutes into the second half courtesy of freshman England-international Russ, who scored an unassisted goal to put UNC in the lead. Taylor Otto received the ball behind midfield, and used her ball-handling skills to dance around a defender and find Russo with a through ball in space. The freshman was nearly tripped up and dispossessed by a Wolfpack defender, but she managed to both stay on her feet and regain possession. She then cut around her defenders to once again find space before ripping off a 25-yard right footer into the far upper 90. The goal was Russo’s ninth of her freshman campaign and her sixth game winner—and by far her most important—sending UNC back to the ACC Championship.

The North Carolina Tar Heels will now face the Duke Blue Devils in the ACC Championship match on Sunday, November 5 at 1 p.m. ET. The game will be nationally televised on ESPNU and streamed live on the WatchESPN site and app.