Arkansas advance to SEC Championship via penalties, Texas A&M via own golden goal

The Arkansas Razorbacks and Texas A&M Aggies have advanced to the 2017 SEC Championship match after a thrilling semifinal round that saw both finalists decided in overtime. The Razorbacks earned their trip to Championship Sunday with a 4-2 penalty shootout over the higher-seeded Vanderbilt Commodores, while a Florida own goal punched A&M’s ticket to the final. Here’s a recap of all of the SEC tournament’s semifinal action. 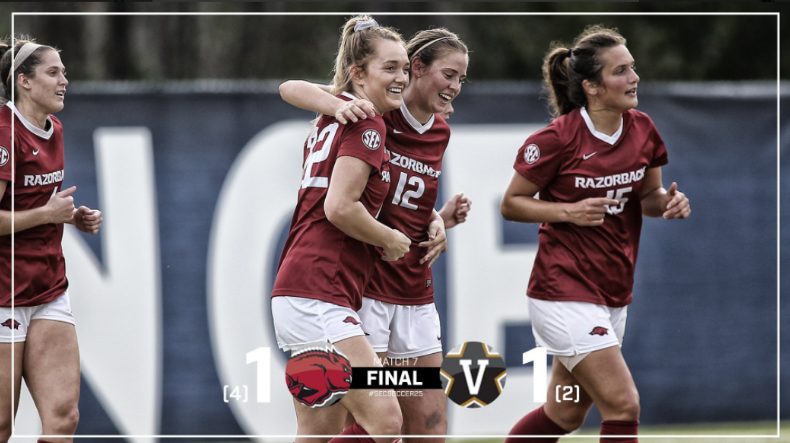 For the second straight year, the Arkansas Razorbacks advanced to the SEC Championship match, this year defeating the Vanderbilt Commodores via penalties to return to the tournament final. Sophomore Kayla McKeon struck first for the Razorbacks, but a Commodore equalizer brought the game back level shortly before halftime. A scoreless second half and two overtime periods sent the game to a penalty kick shootout much to the chagrin of Vanderbilt, who were unable to break their streak of being eliminated when faced with penalties.

The Razorbacks got on the board first courtesy of McKeon’s 22nd-minute goal, her fourth of the season. McKeon has been instrumental in the Arkansas’s tournament success, having tallied an assist in the Razorbacks’ first two tournament matches before her semifinal goal. However, Vanderbilt wasn’t ready to hand Arkansas the win, and Paola Ellis scored the equalizer in the final minutes of the first half. With neither team able to break the 1-1 deadlock before the end of the second overtime period, the game was sent to penalties.

Arkansas head coach Colby Hale made a strategic substitution ahead of the shootout, replacing starting goalkeeper Jordan Harris with freshman Taylor Beitz. Beitz immediately confirmed Hale’s decision, making a huge diving save of Vanderbilt’s first attempt from the spot. That save combined with Stephanie Amack bouncing her attempt off the far post made it impossible for Vanderbilt to catch up to the Razorbacks, whose first four kickers all converted their shots.

With the 4-2 penalty shootout result, Arkansas advanced to the SEC tournament final, becoming the lowest seeded team to achieve the feat. 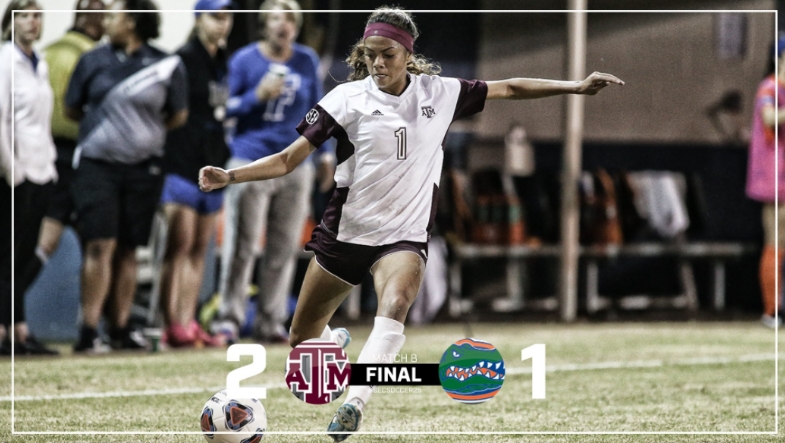 As with the first semifinal match of the night, Texas A&M and Florida was locked at one goal apiece at the end of regulation, sending the match into overtime. This time, however, a golden goal sealed the win for the Aggies, who will now play for their first SEC Championship win on Sunday.

Florida started off the game with the upper hand, getting on the board first. Brazilian international Lais Araujo helped set up the goal in an unconventional way, using her footwork to fend off her defender before ultimately being dispossessed. The Aggie defender inadvertently cleared the ball right to Gator midfielder Sarah Troccoli, who one-timed a low shot through traffic and past a diving Cosette Morche for her third goal of the season.

In the contest’s second half, A&M’s freshman Rheagen Smith equalized via a long ball over the top, which Florida had an opportunity to get on the end of, but a near Gator-on-Gator collision allowed Smith to get there instead. Smith used her speed to make a break on goal and go one-v-one with Florida keeper Kaylan Marckese, who came off her line in attempts of cutting off Smith’s angle. She was unsuccessful, and Smith slotted the ball past the keeper, well off her line, and into the back of the net to knot the game back up.

Smith’s goal was the last in regulation, sending the game to overtime. Texas A&M was attack heavy in the first overtime period, forcing Marckese to make two back-to-back saves in the 96th minute to deny the Aggies of the golden goal. However, Marckese was unable to stop fellow Gator Rachele Smith from scoring an own goal off a bad header clearance attempt shortly thereafter, handing the Aggies the win and a trip to Championship Sunday.

The 2017 SEC Championship, between No. 2 seed Texas A&M and No. 8 seed Arkansas will kick off at 3 p.m. ET on Sunday, November 5. The game will be televised live on the SEC Network and streamed on WatchESPN.