The quarterfinal round of the 2017 SEC tournament played out Tuesday night in Orange Beach, with some roller coaster excitement. Although three of the day’s matches were decided by a 1-0 scoreline—including upsets of the No. 3 team in the nation, the South Carolina Gamecocks, and Tennessee—the No. 2 seed Texas A&M blew out the 10th-seed Missouri, led by a career-high performance by sophomore Ally Watt. Here’s a quick recap of all of Tuesday’s SEC tournament action. 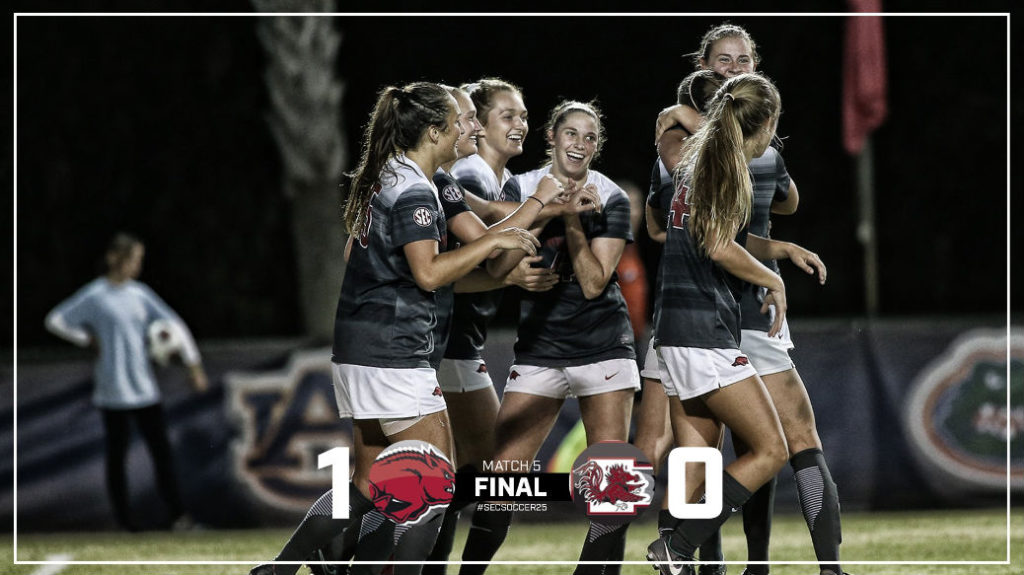 In the biggest win of the tournament so far, No. 8 seed Arkansas defeated the top-seeded South Carolina, 1-0, to eliminate the 2017 regular season champions from the tournament early. Knowing how dangerous the Gamecock attack can be, especially senior standout Savannah McCaskill, Arkansas switched to a 5-3-2 formation in attempts of limiting the Gamecocks’ opportunities on goal, a decision that proved effective in earning Arkansas their first win over South Carolina since 2005.

Although South Carolina outshot Arkansas 8-0 in the opening half, a stellar performance by redshirt junior goalkeeper Jordan Harris earned the Razorbacks their 10th shutout of the season, tying a program record. Harris recorded three saves on the night, although a somewhat controversial team goal-line save in the first half was by far the most dramatic.

Arkansas may not have registered a shot during the entire first half, but that didn’t stop them in the second, going up a goal in the 53rd minute off a short corner. The Razorbacks played a series of short passes that South Carolina’s defense failed to clear, and the result was a shot by Taylor Malham that Tori Cannata redirected past Gamecock keeper Mikayla Krzeczowski and into the back of the net for the game winner.

With the upset Arkansas advances to the semifinals, where they’ll face off against Vanderbilt. 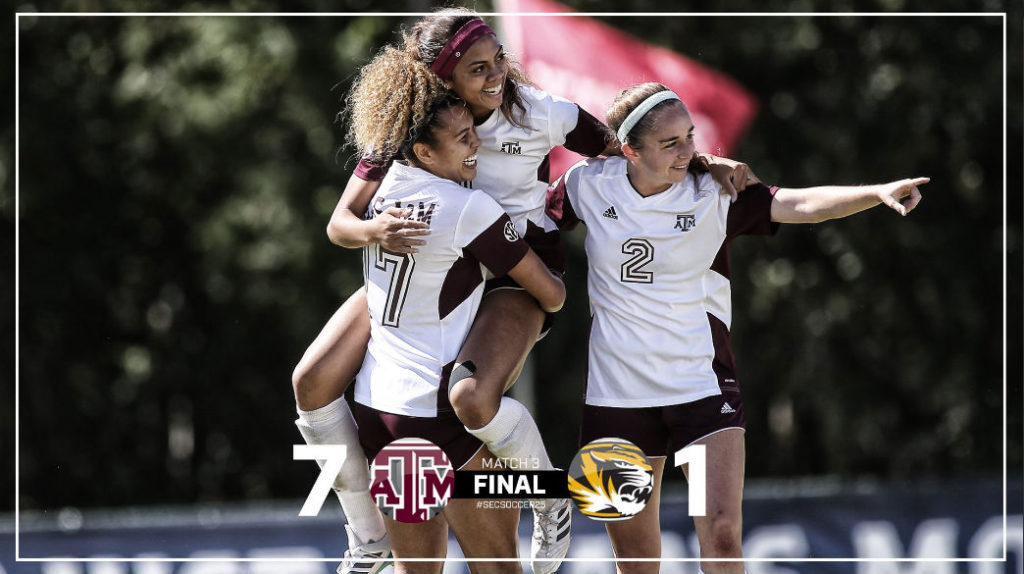 Day 2 of the SEC tournament kicked off with the biggest win score-wise of the day as the No. 2 seed Texas A&M blew past Missouri, 7-1. The Aggies attack was led by sophomore forward Ally Watt, who had the performance of her career bagging four goals, including a first-half hat trick scored inside of 20 minutes. Watt’s four goals also tied an A&M record for goals scored in a single game, while increasing her team-leading season total to 11.

In addition to Ally Watt, Jimena Lopez (penalty), Stephanie Malherbe, and Claudette Lassandro all contributed singles for the second-seed team. Aggies goalkeeper Cosette Morche also had a big night in goal, tallying nine saves in the contest, including a penalty save by Missouri’s leading scorer, Sarah Luebbert, early in the second half. However, Missouri prevented Morche from earning the clean sheet as Luebbert connected with Jessica Johnson in the 27th minute for the lone Tigers goal of the night.

Florida Gators get revenge over Auburn with 1-0 win 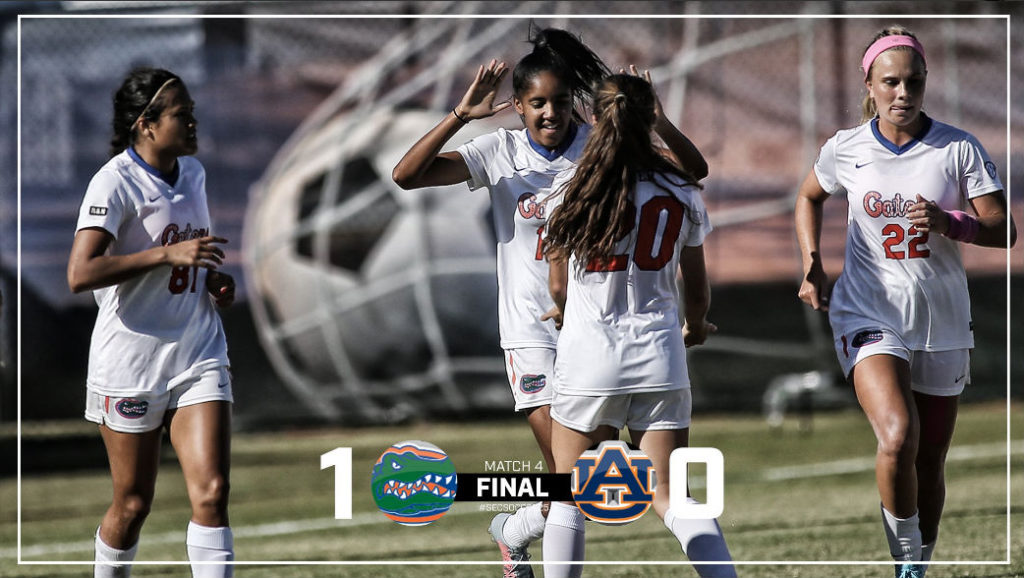 Florida took the first step in repeating as SEC tournament champions while also getting a little revenge on the Auburn Tigers, who eliminated the Gators with a 3-1 win in the third round of last year’s NCAA tournament. Auburn also shut out the visiting Gators, 1-0, when the two teams met during the regular season, but today Florida defeated Auburn by the same scoreline to knock the Tigers out of the SEC tournament.

Florida scored the lone goal of the match in the 31st minute off a set piece after Auburn’s Sarah Houchin was called for a handball just outside the box. That set the Gators up for a free kick dangerously close to goal, and Brazilian international Lais Araujo capitalized on that proximity, sending a flawless bending ball through a gap made in the wall by her teammates and past Auburn keeper Sarah Le Beau for her second goal of the year and, more importantly, the quarterfinal winner.

Florida will now face off against Texas A&M in the semifinal round. 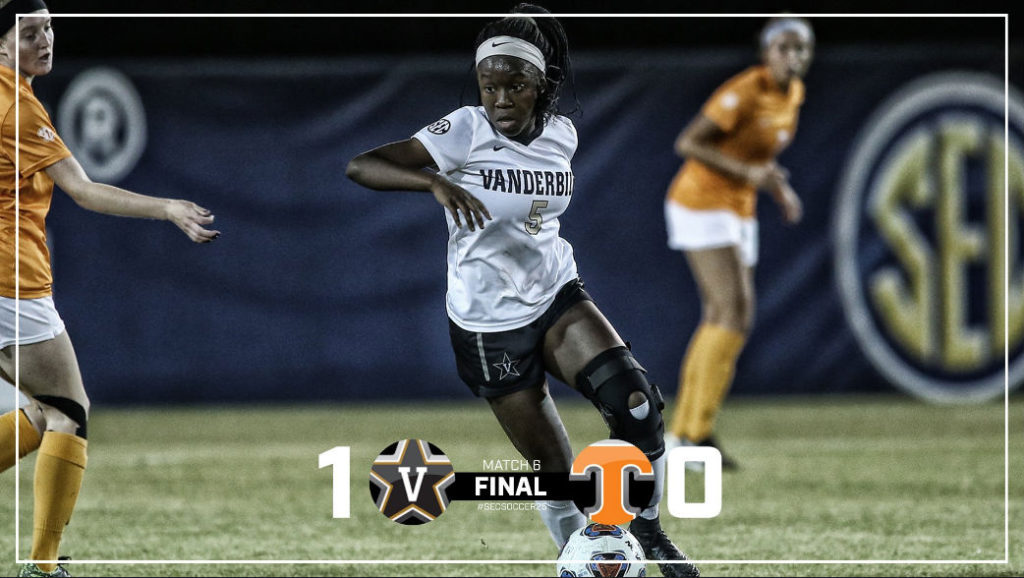 Although Vanderbilt was the higher seeded team in the SEC tourney, Tennessee is a ranked opponent, coming in as the No. 18 team in the nation. That ranking is likely to change for the Vols, who were eliminated in the quarterfinals by their in-state conference rivals, Vandy, 1-0, Tuesday night.

As in the previous meeting between the two teams, a Commodore penalty was the difference maker. This time around, the penalty came early in the second half after Myra Konte was taken down inside the box after a run up the left side and a one-v-one battle with her defender. Once again Stephanie Ameck, who scored the game-winning penalty in the teams’ regular season matchup, converted from the spot to give the Commodores the quarterfinal win over Tennessee.

Vanderbilt advances to the semifinals, where they will face the Arkansas Razorbacks. Both SEC tournament semifinals will be played tomorrow, Thursday, November 2, beginning at 4:30 p.m ET. Both matches will be televised by the SEC Network and streamed live on WatchESPN.