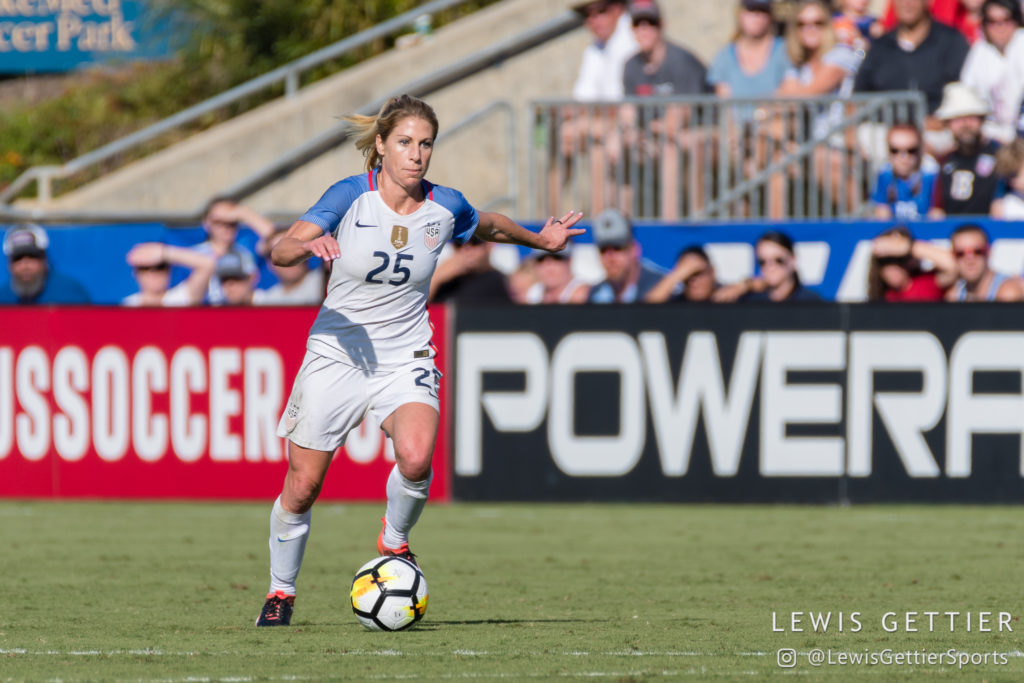 McCall Zerboni had her weekend planned. She was going to do some coaching, go watch the North Carolina FC men’s game Saturday night and handle some duties revolving around her involvement in the Raleigh community. Nothing special. She was just going to enjoy her first off-season weekend after helping the North Carolina Courage to the National Women’s Soccer League regular-season title and into the championship game, where the Courage lost 1-0 to the Portland Thorns.

Ellis offered something the 30-year-old Zerboni thought would never come – an invitation to join the U.S. national team. The USA had a friendly against South Korea three days later at Sahlens Stadium in Cary, the home of Zerboni’s Courage, and Ellis wanted Zerboni.

So Zerboni packed a bag, left her apartment, jumped in her car, and took off to join the team. Four miles later, she checked into the team hotel.

“It’s a huge honor,” Zerboni said the day before the game. “To get called up is amazing, and then to have it in what has been my hometown is great. I’m excited to be surrounded by amazing players and a great program. I’m looking forward to the experience. I’ll see what I can learn and hopefully grow from it.”

On Thursday, the USA defeated the South Koreans, 3-1 in New Orleans. Two players – Mallory Pugh and Andi Sullivan – did not make the trip from New Orleans to North Carolina. Pugh suffered a minor hamstring injury, while Sullivan returned to Stanford for the Cardinal’s game against Oregon State. Zerboni would fill the gap in the roster.

“It all happened pretty fast,” she said on Saturday.“I’m just so grateful I can be at this level with all these amazing players. I’m excited to see what I can learn and see what I can add to my game.

“It’s all still surreal, but I’ve been doing this for quite a while, and I’m not going to change too much. Football is football. It’s the same thing I’ve been doing since I was five years old. I just want to put out the best performance I can.”

Mallory Pugh, the youngest player on the USA roster, was 15 months old, when McCall Zerboni discovered what she wanted to do with her life. She started to dream about it on July 10, 1999, the day 12-year-old McCall was among 100,000 people packed into the Rose Bowl in Pasadena, Calif., to watch the USA play China in the ’99 World Cup final. When Brandi Chastain won it with the fifth penalty kick in the tie-breaking shootout, Zerboni was hooked.

“The 1999 World Cup at the Rose Bowl, I was there when Brandi ripped off her shirt,” said Zerboni, a native of Camarillo, Calif, an hour north of L.A. “I got to see that level … to see them win that game, I think that’s when I fell in love with it and wanted to take it to the next level.”

She played for the U-17 national team in 2003, but a call-up to the national team eluded her through the tenures of national team coaches April Heinrichs, Greg Ryan, Pia Sundhage, Tom Sermanni and the first four years of Jill Ellis.

“McCall played for me for four years at UCLA,” said Ellis. “I feel I know her inside and out. She’s very humble and deserving of this opportunity. She’s a warrior. She’s a technical player who reads the game very well. She was incredibly important to her [Courage] team this year with her spirit.”

Courage coach Paul Riley and Zerboni’s teammates sang her praises all season, often wondering whether she would get her chance at the international level. This season — her 9th as a professional during which she played for seven different teams –was her best. Zerboni just kept impressing everyone around her.

“I feel like the more I get to play with her, the more I’m like, ‘You are just the most amazing person I’ve ever met,’” said Sam Mewis, the Courage and USA midfielder. “Playing with her is so much fun and it is so easy. She does a lot of my work for me.”

When she joined the national team in Cary, or rather when the team joined her, there were plenty of familiar faces around. Three of her Courage teammates — Mewis, Lynn Williams and Abby Dahlkemper – were already with the team.

“I feel a sense of comfort being around some of the players I played with all year and being here at Wake Med,” Zerboni said. “It’s nice to be at a place where I feel comfortable. That can translate onto the field.”

Zerboni will be 31 in December, but she’s not the oldest field player on the current roster. Carli Lloyd is 35. Megan Rapinoe and Becky Sauerbrunn are 32, and Allie Long is eight months younger than Zerboni. Compared to her elders, though, Zerboni’s lack of international experience is the mark against her. Rapinoe is the least experienced of the bunch with 126 more caps than Zerboni.

“It’s very rare that a player gets called in this late in their career,” Zerboni said. “I didn’t really expect it.”

But the experience Zerboni does have taught her what is important.

“I’m still passionate to improve my game,” she said. “I wake up every day and say, I want to get better. and hopefully encourage and inspire those around me.”

Zerboni knew the circumstances surrounding her call-up. The injury to Pugh, Sullivan returning to Stanford, the fact that she was living in Raleigh, and a coach who knew her all played a part in her invite. But she arrived with the high recommendations from her Courage teammates, not to mention the constant drumbeat provided throughout the NWSL season on her behalf by Courage coach Paul Riley.

But since she wasn’t on the original roster, there was no way she could have figured into Ellis’s lineup plans for the two-game series, and being called in didn’t mean she would get in the game. But the USA thoroughly dominated South Korea with four first-half goals, and Zerboni started the second half in a holding midfield spot behind Lindsay Horan and Lloyd in a three-woman midfield.

“You always want to prepare like you are going to play,” she said. “I think preparation is a big part of your success and your performance. I prepared like I was going to play the game, so when I was told I was going to come in at halftime, I was ready.”

Zerboni did what she does best in her 45-minute debut. Always highly active and energetic, she trolled around intercepting passes, making tackles, connecting quick, intelligent, unspectacular passes, and shouting out helpful tips to those around her.

“Like any time at a new level with a new team, you have to get comfortable with the pace and the new players around you,” she said. “But I was happy with the way I played.”

Mewis, who scored twice before exiting at halftime, was asked what the highlight of the game for was. She didn’t hesitate with her answer.

“McCall,” she said with a smile. “Seeing her get her first cap was just so cool. She deserves it so much, and I hope it was the first of many for her.”

Whether she sticks around for more, or if her career cap total remains at one, Zerboni can remember October 22, 2017 in Cary as the day she reached a goal she set 18 years earlier.

“It’s something every player dreams of, and here I am in a dream,” she said.