Mewis brace leads US to 6-0 rout of South Korea 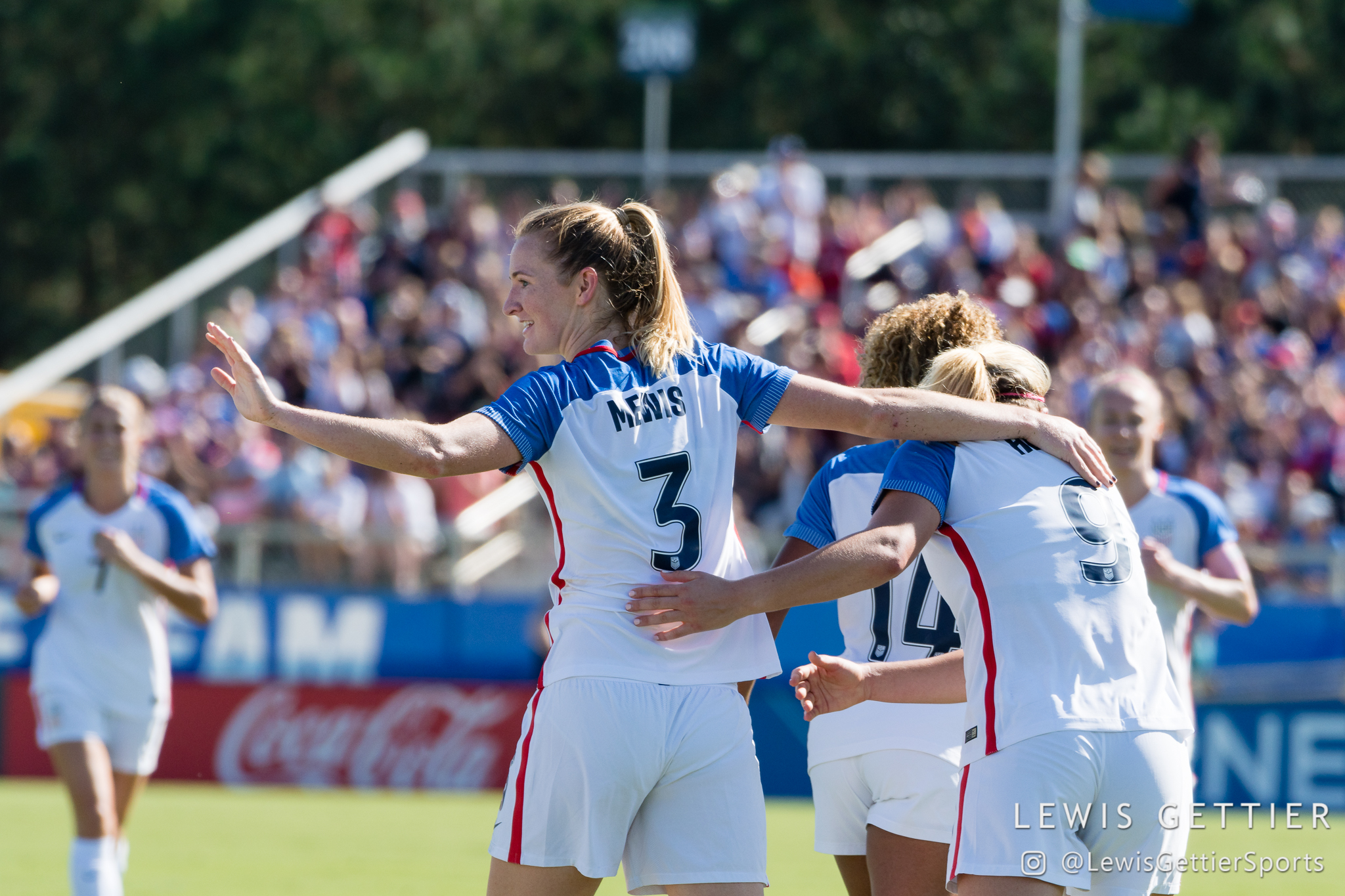 Five different players scored, two goalkeepers combined for a clean sheet, and McCall Zerboni took her place in the history books as the oldest USWNT debut ever. South Korea didn’t put up much of a fight as the US swept the series with a 6-0 win in their second match. Over 9000 fans showed up to Sahlen’s Stadium at Wakemed Soccer Park in Cary, North Carolina, home of the North Carolina Courage.

Mewis got things started early in front of her home crowd. In the third minute, she rose unmarked at the far post to head home a corner kick from Abby Dahlkemper in a goal that was eerily similar to the first goal scored against South Korea last Thursday (by Julie Ertz). She followed it up with a second goal in the 20th minute. Lindsey Horan sent the ball in from the left flank, and Korean goalkeeper Kang Ga-ae punched it away, spilling it right to the feet of Mewis. This was the first multi-goal game of her international career.

The first half was highly lopsided as the US dominated both possession and attack. South Korea rarely ventured into their attacking half and when they did, Ertz was there quite often to win the ball back in her physical, aggressive style. They found a lot of success on the right flank, where Williams easily turned her opposing fullback with her speed, although the final pass was lacking.

In the 35th minute, Alex Morgan received the ball in the middle of the park, turned, and sprayed it forward to Press. The striker was 1v1 with her defender and made herself space with a few quick touches before launching a rocker from the top of the box that Kang had no chance of reaching.

The US allowed Korea a bit more possession in the dying minutes of the second half and nearly paid the price in the 41st minute. Lee Geum-min ran onto a fantastic through ball and was able to get a step on Ertz, Dahlkemper, and Becky Sauerbrunn. She launched a hard shot from the penalty spot, but Ashlyn Harris positioned herself well to cut down the angle and deflect it out for a corner.

The US quickly recovered and put an exclamation mark on a dominant first half with a stoppage time goal. Horan headed Dahlkemper’s corner kick toward goal, where Ertz met it at near post and redirected it past Kang. The goal pulled Ertz even with Morgan at five goals apiece, leading the team in 2017.

The Ertz family has a thing for Sundays.@julieertz ties @alexmorgan13 for the team goal lead at five! pic.twitter.com/JyHwsoG8rR

Ellis made a slew of substitutions to start the second half, sending in Jane Campbell for Harris, Zerboni for Sauerbrunn, Allie Long for Mewis, Rapinoe for Press, and Crystal Dunn for Morgan. Ertz dropped back to centerback as a result. When Carli Lloyd subbed in for Casey Short in the 64th minute, Dunn moved to left back.

Perhaps as a result of the substitutions, as well as some made on their side, South Korea started off the second half better than the first, seeing a little bit more of the ball and building up some attack, although nothing troubled Campbell too much, getting her first touch off an easy save that was right to her from a free kick in the 53rd minute. However, in the 61st minute, Rapinoe jumped on a lazy giveaway from Kim Hye-yeong and drove into the box, slotting it to Williams. Kang had moved over to deny what seemed like a likely shot from Rapinoe and so Williams was wide open for an easy tap-in.

The game fell into a lull after this goal. Korea was beginning to visibly tire and had to swap goalkeepers after Williams’ knee connected with Kang’s head. Williams was carded for the collision, although it appeared she may have received contact inside the box prior to that. The game got a bit chippy and certainly choppier. In the 78th minute, Lloyd knocked a header off the post in what looked like a sure sixth goal for the US.

That goal came just five minutes later. In the second of two club connections that led to a goal, Horan collected a rebound from substitute goalkeeper Kim Min-jeong (making only her second international appearance, same as Campbell) and cut it back for a wide open Long, who had no problem firing it into the back of the net.

Not to be outdone, South Korea had a few more signs of life. In the 86th minute, Campbell was forced to go full stretch to get one hand on what initially looked like a long, lofted cross that soon became clear it was destined for the far upper 90 by Lee Eun-mi. The last play of the game was a dangerous South Korea free kick in stoppage time that Lee sent over the crossbar.