Catching up with the in-form Alex Morgan 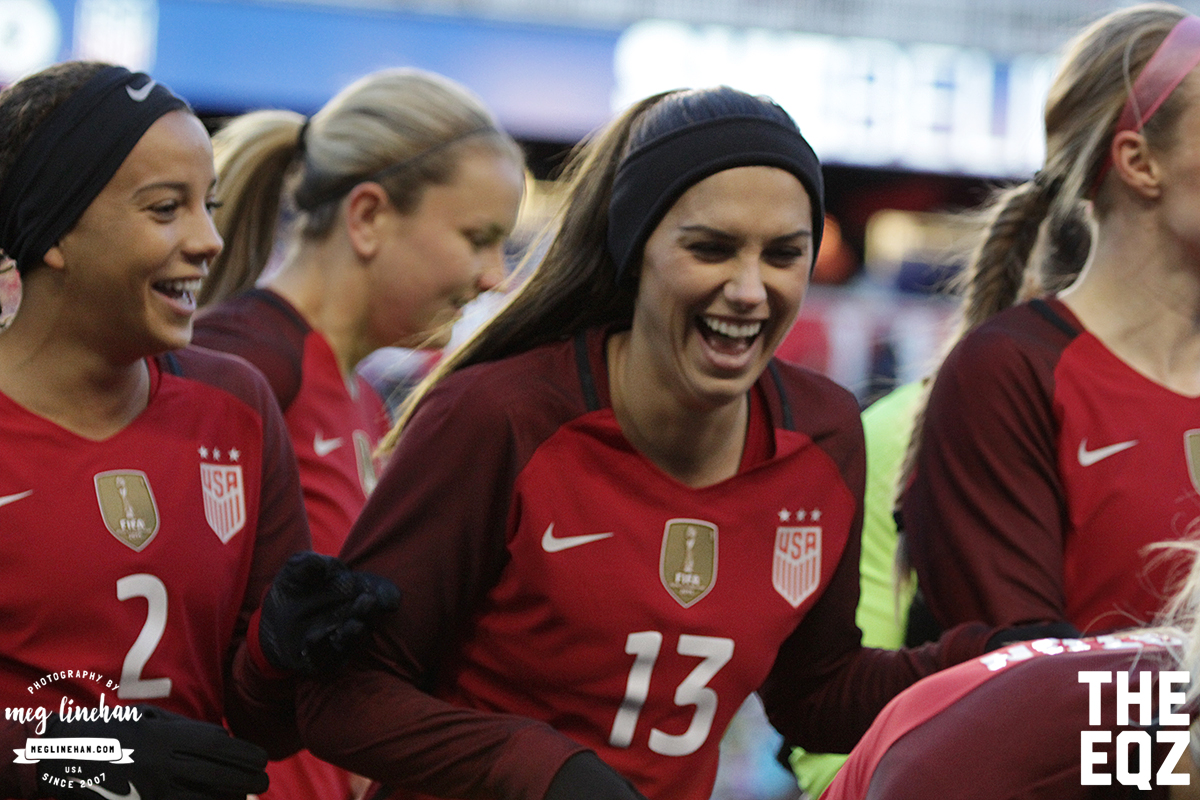 Those are the words of Alex Morgan when The Equalizer sat down in the hotel lobby of the U.S. Women’s national Team the day before the side’s first game with South Korea.

The Orlando Pride forward is coming to the end of one of her most successful seasons, having won three trophies during her short stint in France with Lyon, and helping the Pride reach the NWSL postseason playoffs. The in-form forward struck nine goals in 15 games for the Pride after returning from France, and forged a formidable partnership with Brazilian star, Marta. Her form for the national team at the back end of the year has also been impressive, with her goal against South Korea in New Orleans, her fourth in three matches.

She admitted before the game that she was in a “good place” at the moment, and hoped she could see out the year with more positive performances, and of course, goals.

“Finishing off with a successful two seasons in one from France to the U.S., I want to end this year on a high note,” Morgan said. “So for me, continuing to execute chances in the next four games (South Korea and Canada) is going to be very critical and important for me, but I’d say I’m in a really good place right now.”

In years past, Morgan was a guaranteed starter for the U.S. Cast your mind back five years when she scored 28 goals and had 20 assists in a calendar year that should have won her the FIFA World Player of the Year award. The stats were ridiculous, and will be hard to repeat with the competition for places that Morgan now faces.

Injuries at the start of the year meant her time at Lyon took a little while to get going, but she also admitted that she struggled to find rhythm with the U.S. having being in and out of the side.

“I feel like earlier this year it was quite difficult to get a rhythm and feel that comfortability factor within the U.S., but at the end of the day there really isn’t going to be that guarantee of that comfortability, so I need to bring my strengths and just take advantage of the time I get on the field.

“All of us are very competitive and we all want to be on the field. I want to be playing 90 minute games, but I don’t know if that’s realistic as the coaches are still assessing players. But I think it’s just another couple of games for me to continue this run and show that I can not only play nine, but out wide as well.”

The Pride and Marta

Jill Ellis will have found it hard to drop Morgan due to the form she found in the second half of the NWSL season with the Pride. The arrival of Marta was always going to benefit a player of Morgan’s style, a style she admits does not see her “run and take on three or four players,” but instead sees her find pockets of space in dangerous areas, and simply needs the service to exploit it.

When Marta joined the club, it meant a reuniting of two of the WPS Championship winning Western New York Flash forwards. However, Morgan was only just out of college and finding her feet in the professional game. She revealed that when the Brazilian joined the Pride, she wasn’t sure how their relationship would develop on the field.

87' – @alexmorgan13 with a brilliant flick to find the back of the net and put @ORLPride up 2-1. #KCvORL pic.twitter.com/KC7TcnVg8t

“When I learned that Marta signed, I wasn’t sure how our partnership would work and how much we’d feel that connection,” she said. “When we won the WPS, it was also a World Cup year, so I was pulled away for the national team, and she was also pulled away too. So I don’t feel that I got a good chance to develop the on-field relationship. So this year I was hoping to establish that quickly, being that I came into the team late.”

That relationship certainly did develop quickly, with Marta adding 13 goals and six assists to Morgan’s nine goals and four assists, making them one of the most feared duos in the league.

Lyon and ‘that’ injury in the Champions League Final

It wasn’t until mid-June that the pair were able to start cultivating their relationship on the field after Morgan returned from Lyon injured following the UEFA Women’s Champions League Final. When the move to France was announced at he end of last year, eyebrows were raised and some questioned Morgan’s ambition in wanting to join a club that is known for one-sided victories and a wealth of talent all over the field,.

At the time, Morgan said she wanted to go France to develop her game, to become a better player. It was a tough start for the new striker. New surroundings and a new culture, with a language she didn’t speak a word of, didn’t make it easy. With the world of women’s soccer watching, it also took Morgan a few games to get off the mark, which eventually came in a French Cup game against Rodez when she scored a brace.

The U.S. forward didn’t always play in her favored number nine role either, slotting in on the left of a front three alongside Ada Hegerberg and Eugenie Le Sommer, often tasked with defensive duties, as well as attacking ones. But despite some injuries, she acclimatized and eventually started to make her mark, scoring 12 goals in 15 matches in France, helping her side to three trophies.

But did she get the development she set out to obtain during her time in France?

“I absolutely feel like I got what I wanted out of Lyon. What I went there to do was continue developing as a player, to try a different style and to challenge myself. I felt like I was challenged to play a different role on the team and learn on the fly. It was very challenging week in and week out and it definitely made me a better player. It opened my eyes up to different styles of play and it was an important step for me.”

Those challenges Morgan refers to include an injury she suffered just before the final of the French Cup against Paris Saint-Germain. The forward was ruled out of the match, but was given a fighting chance of making the Women’s Champions League Final soon after. Her hard work paid off, as she not only made the squad for the final in Cardiff, again against PSG, but she started the match.

Heartbreak would soon follow however, as Morgan was forced to limp off after just 22 minutes, watching from the sidelines as her team went onto claim victory on penalty kicks.

The speed at which Morgan returned was one many questioned. Was she fit? Was she forced in? In her own words, Morgan says she was ready.

“Going into that game those first 20 minutes I felt really good. I got touches on the ball and I feel we were dominating from the first minute. Then I got injured, and that really sucked. I did feel ready, but there was a slight percentage that I could re-injure myself. It was definitely rushed as much as I could be in order to get myself healthy.

“I have thought about this a lot,” she continued, “and at the end of the day, I would do it the same way because I felt ready at the time and I was training at full 100% without limitations for three days, I believe. If I had chosen not to play for that slight chance of re-injuring myself, I think I would have forever regretted that.”

A day after meeting in the hotel lobby, Morgan goes onto score what many described as a “classic Alex Morgan goal.”

RTs DO count as endorsements ?

The strike makes it four goals in her last three internationals, and continues the scintillating form she has found herself in since her return to the Pride.

Asked whether the “classic Alex Morgan” turn and shot is instinct or something she works on, she said:

“I definitely do work on this. I try to put myself in realistic situations that I see myself in during a game. Obviously it doesn’t always work out in practice, but I try to set that personal standard when I am with my coach or with the team, but you have to make do with the situation you find yourself in, and I just have to be opportunistic and put myself in a good position to get an opportunity on goal.”

Three games remain for the U.S. before the end of the year, and then there will be a period of downtime before the team meets in January for its usual winter camp. For Morgan, the young squad that surrounds her within the national team gives her optimism for a good year with her country, and she is hopeful that by this time next year, the team will be even more stable.

“I think we’re heading in the right direction,” she said. “There’s a lot of young players who have not been a part of a major tournament thus far. I think youth will hopefully be able to help us grow into a really stable and confident team that feels can get that title back in 2019.

“This is a very different team to 2015. We are continuing to build and by the fall of 2018 we’ll still be fine tuning things, but I think its understandable to think we’re still building this team right now.”

For more on Alex Morgan, check out Kieran Theivam’s podcast on wosozone.com