Kaiser: South Korean players to watch ahead of USWNT matches 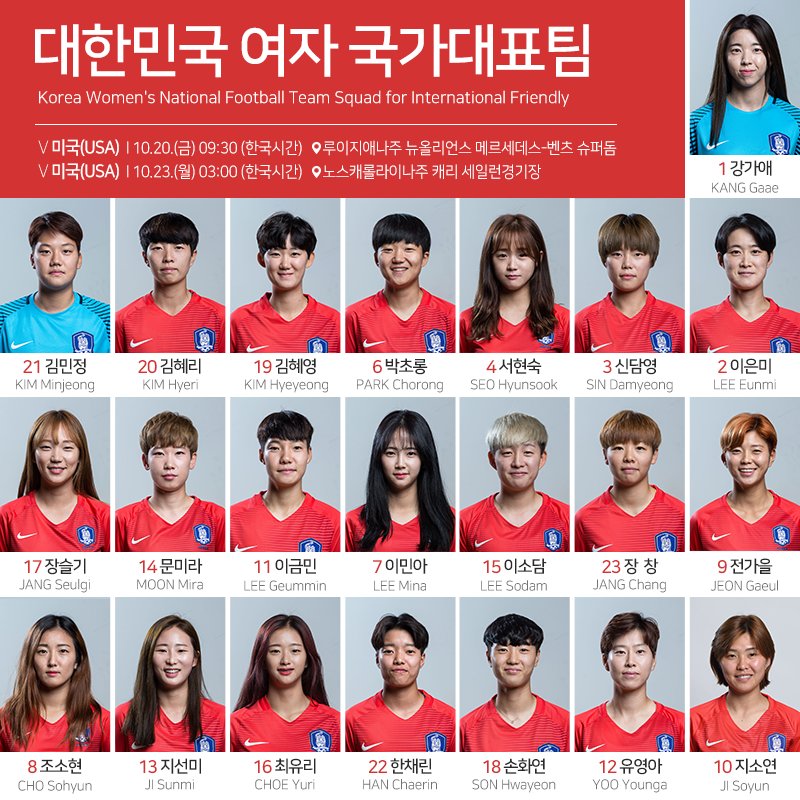 NEW ORLEANS — The United States women’s national team faces a relatively unfamiliar opponent this week in South Korea. The last time the two teams met – in the final warm up before the 2015 Women’s World Cup – the Koreans held the U.S. to a surprise 0-0 draw.

In the interim, the U.S. likely has seen very little of the Koreans. Friendlies are few and far between; the Koreans have played in only three friendly matches since advancing to the second round of the Women’s World Cup; a home friendly against Australia in November 2015, and a pair of friendlies in Myanmar in June of last year.

When Korea does play, it is usually in a tournament. On that front, they have had a highly successful 2017. At the Cyprus Cup, they reached the final where they lost 1-0 against Switzerland. Then, in April, they won their qualifying group in Pyongyang, North Korea to advance to the Asian Cup next year in Jordan. None of those matches, however, were televised.

Amid the lack of coverage, what the American side and fans will have missed is a Korean side that continues to improve and that has an abundance of young talent coming up through the system. Heading into this week’s friendlies, here are the established hands and the relative newcomers to keep an eye on.

Fans of the FA-WSL are intimately familiar with Ji. Her creativity and technical skills make both Chelsea and the Korean WNT tick. She poses the biggest attacking threat to the US; if they give her the slightest glimpse at goal, she’ll take it. By the same token, if they key in on her and leave teammates with space, she has the vision and the skills to make a killer pass.

For Chelsea, she has tended to play as a number 10, and at times as a deep lying playmaker. Despite this, she has scored bundles of goals; six in eight starts during the recent Spring Series after hitting double digits in each of the previous two seasons.

Her role with the national team depends in large part on what formation they play in. She plays as a forward at times, but it is likely that she will be in the midfield where she can create for more advanced attacking players. She is Korea’s leading goal scorer with 45 in 95 appearances.

With Ji on the pitch, the US must avoid fouls in dangerous spots in their own defensive third. The playmaker is an outstanding set piece taker and has converted many a free kick into goals.

After a successful 2016 on loan with INAC Kobe Leonessa, the captain of the national team returned to Hyundai Steel for the 2017 season where she played as a two-way midfielder in a 4-3-3 system, supporting the attack but also breaking up any opposing efforts to get forward.

If Ji is the Ferrari of the Korean starting XI, Cho is the Ford F150. A veritable workhorse that will cover every blade of grass on the pitch over 90 minutes. She is responsible for blowing up the oppositions attacking efforts and getting things started in transition.

Her skillset is not just defensive in nature, however. She can score from long range with either foot and has tremendous accuracy in hitting passes over the top of the defense. If she has a weakness, it is that at times her short passes are a bit sloppy, something for the US to watch out for and exploit.

Jeon remains the only South Korean to ever play in the NWSL, having signed with the Western New York Flash ahead of the 2016 season. Unfortunately, a delayed ITC and a series of injuries limited her to just 85 minutes in one start and one substitute appearance. She was eventually waived and sat out the remainder of the 2016 season to get healthy.

This season, she is back with Hyundai Steel, part of the attacking armada they have at their disposal. With so much depth and talent, Hyundai Steel tends to rotate heavily and these days Jeon is more of a role player than a regular starter. When she does play, she’s generally on the left of a front three in Hyundai Steel’s 4-3-3 system.

Jeon is a technical player in the same mold as Ji. On this tour, it is unlikely she will start. However, she will be a dangerous option off the bench and no doubt will want to show the American audience what she is capable of after her aborted effort in the NWSL, especially playing in the new home of her former team in the second match of the week.

At 26, Lee does not necessarily qualify as a youngster, but she is one of the players that has established herself in the national team since the 2015 Women’s World Cup. Lee was also a part of the Korean team that finished in third place at the 2010 U-20 Women’s World Cup.

She made her senior debut in February 2012 and made thirteen total appearances over the course of 2012 and 2013, then was dropped from the team until the East Asian Cup in August 2015. Since then, she has cemented her place in the starting XI with an outstanding 2016 and 2017 campaign for club and country.

Lee is, to put it bluntly, small in stature. She comes in at just over five feet and is thin as a rail. Her biggest challenge has been adjusting to the physical aspects of the game. Over the past two seasons, she has made that transition and has never looked back.

Lee is versatile, a necessity in Hyundai Steel’s deep lineup. This season, she lines up anywhere in the front three – left wing, right wing or in the middle as a false nine. She will most likely be in an attacking midfield role for the national team this week with the freedom to get forward often, even swapping roles with the striker from time-to-time.

She is quick, fast, turns out of trouble easily, aggressive and always a goal scoring threat. She has hit the back of the net fourteen times for Hyundai Steel this season, second highest in the league, and is also second in the league in assists with ten. She has scored six times in thirty-three national team appearances, all of those goals coming in the last twelve months.

In short, Lee is a player ready to play overseas, these two friendlies are an ideal way for her to showcase her skills. Look for her to take advantage of it.

After a quiet first professional season with INAC Kobe Leonessa in Japan in 2015, Jang headed to Hyundai Steel for the 2016 season and has been a key piece of both club and country ever since.

The 23-year old made her senior national team debut at the Cyprus Cup in 2013. She played again in the 2014 Cyprus Cup, but like Lee, did not become a mainstay until the 2015 East Asian Cup. Since then, she has been a lock as a starter.

Jang is the “next big thing” out of Korea. On a talented Hyundai Steel team, she stands out. She is a versatile player, lining up as an attacking left fullback often as well as a left wing but sometimes plays on the right side as well. She is listed as defender in the national team roster, but is just as likely to line up in an attacking role.

She has scored eight goals for the national team in the last twelve months, including the critical goal against North Korea that put the South Koreans into the Asian Cup. She is quick, has an excellent cross, is dangerous cutting inside and very technically skilled on the ball.

Jang is also ready for an overseas opportunity.

Lee Geum-min was the number one overall draft pick ahead of the 2015 WK-League season by Seoul City out of Ulsan College. Having been an integral part of the Korean side that won the 2010 U-17 Women’s World Cup, she was destined for great things.

She made her national team debut as a part of the experimental 2013 Cyprus Cup team, then was not capped again until the warm up matches for the 2015 Women’s World Cup. She went on to make two appearances at that tournament.

In the two seasons since, Lee has made her case for more time, excelling at Seoul City as a forward, finishing third overall in goal scoring last year with nine and is currently tied for fourth with ten goals.

She has been a fixture of the national team this year, playing in all four matches as Korea finished runners up at the Cyprus Cup, and scoring four goals in Asian Cup qualifying in April.

Lee is fast, aggressive and has a rocket of a right foot. She can play as a forward or in the midfield. As is the case with much of this team, she has strong technical skills. Expect her to play as a winger against the US.