Riley, Parsons to square off in chess match between popular English coaches 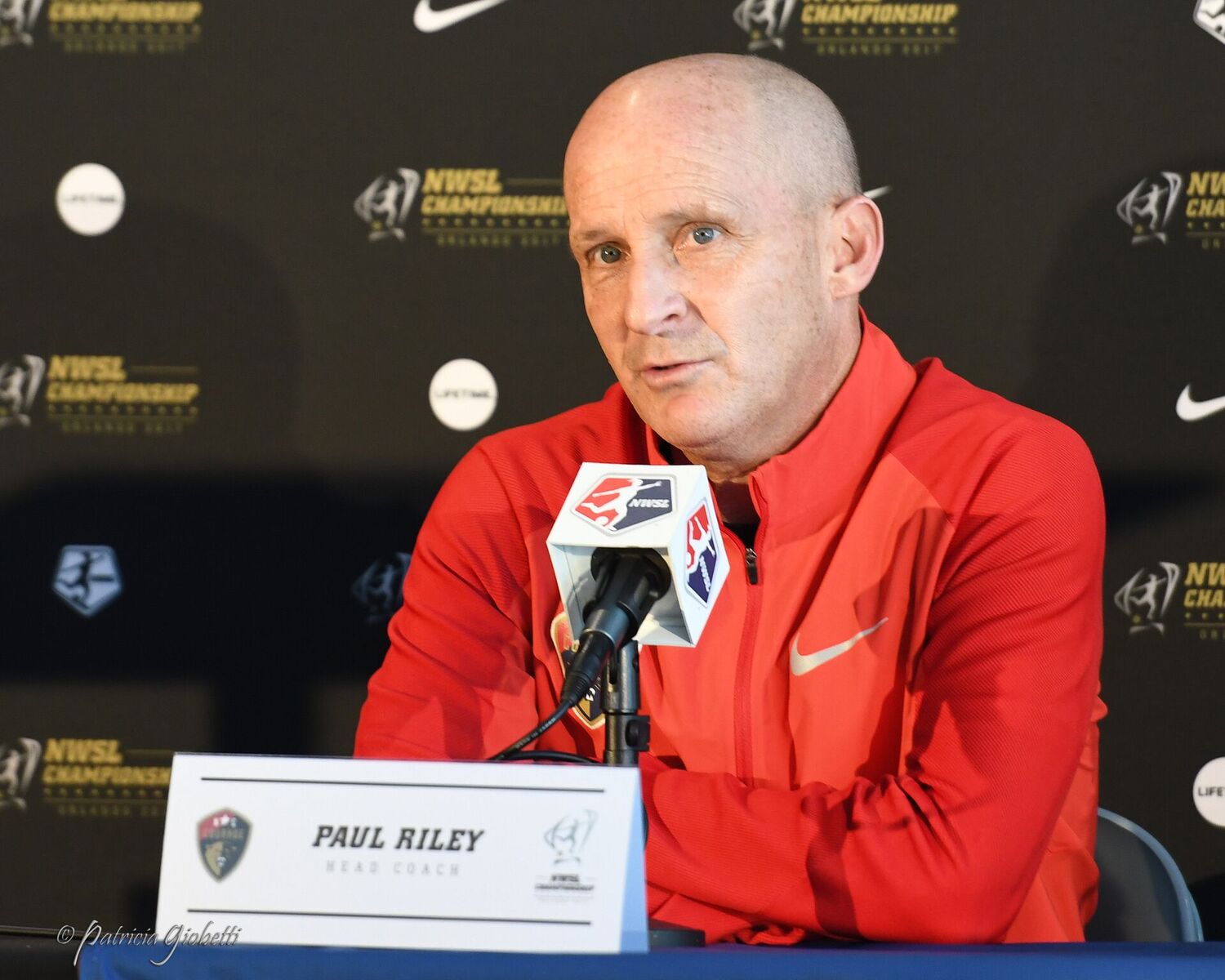 Paul Riley will be in his fourth final on Saturday. It will be his first with a fellow Englishman in the other dugout (photo copyright Patricia Giobetti for The Equalizer)

ORLANDO, FL — For the first time in the NWSL Championship Game, both dugouts will be hosting head coaches from England, which makes it four years out of five that an English coach has been in the post-season final.

Ask anyone who’s had the pleasure of the company of Paul Riley or Mark Parsons, and they’ll tell you that both can talk a good game. But what they both have in common, is they back up the talk with results, and on Saturday they will come face-to-face for the twelfth time in the NWSL, with their record absolutely even – four wins apiece, and three ties.

The experience and mentality of Riley

Riley will feel he has the slight upper hand, as one of his wins was the epic encounter we witnessed last season in the postseason playoffs, which his Western New York Flash side won 4-3 over Parsons’ Thorns. It’s that playoff experience that could be key this coming Saturday when Orlando hosts the Portland Thorns and North Carolina Courage, with Riley also reaching two WPS finals with the Philadelphia Independence.

Parsons on the other hand, at present, only has one playoff win from four matches – and that came last week against Orlando.

The environment that both have created at their respective organizations has been a significant reason as to why we see the top two ranked sides ready to do battle. Riley has received some criticism (some of it tongue in cheek) for his repeated efforts to convince media and fans of the league that his side are the ‘underdogs.’ Deep down, he’ll know few will buy into this view.

Last year the Western New York Flash were expected to struggle in the league with a young side that had little professional experience. Riley went with the approach of low expectation, meaning little risk of failure. The reality is, nobody expected his team to succeed, so they played on that, and continue to do it now. It doesn’t matter that his team are Shield winners. If coming out with a chip on their shoulder and the mentality that they are underdogs is going to get results, why change that?

McCall Zerboni said on a conference call this week that her own career has developed under the leadership of Riley, and said players would “run through walls for him,” such is the respect they have and the confidence he has installed.

Speaking at the NWSL media day, Sam Mewis, one of 14 players from the victorious Flash team from 2016 on the Courage roster, said she still felt that it was still very much “us against the world,” and said the culture within the team had not changed too much from last year.

“The culture is the same, we have a lot of players returning and those coming in have adopted that culture,” Mewis said. “Whether or not the media believes we are the underdog, Paul has made us feel that way and I still feel like I did last year, that it’ is us against the world and we still have so much more we want to show.

“Paul has believed in us so much from the beginning. We needed someone to tie the group together last year, and Paul was that person. He gave us all a common identity and my investment in this team is everything, and Paul has made that the case for every single person here.”

There’s a discipline attached to the Courage side he has put together this season, while he has shown how he can get the best out of players were others may have failed – Denise O’Sullivan anyone?

The Ireland international was waived by the Houston Dash earlier in the year but now finds herself in an NWSL Championship Game. She said she has “learnt a lot” during her time under his coaching, and knew she was walking into a good team.

Culture created by Parsons is key

Parsons on the other hand, is much more than a young pretender, but his career is still taking shape, unlike Riley who would now have to be considered a veteran of the women’s game. A relative unknown when he took on the role at Washington Spirit, Parsons had previous positions with Chelsea Ladies’ Reserve side, and the second team of the Spirit. 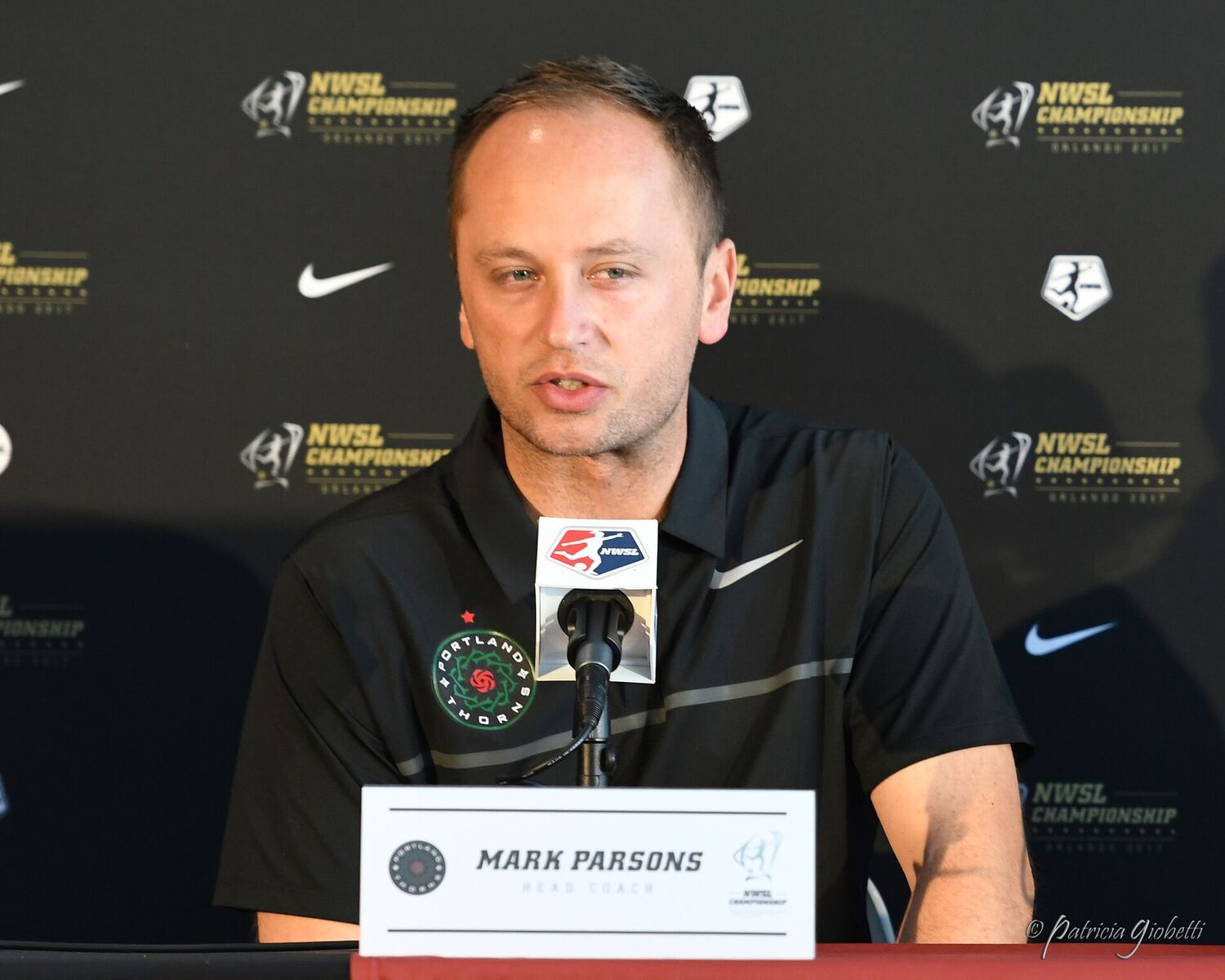 After losing three straight semifinals, Mark Parsons is into his first NWSL Championship (photo copyright Patricia Giobetti for The Equalizer)

He inherited a side in Washington that had struggled, was not expected to do too well, while he had the added pressure of trying to make a name in the most competitive league in the world. But he stood up to the challenge, had his team play an attacking, attractive style of soccer, which earned two postseason playoff spots and saw his stock rise, which resulted in him replacing Riley as the head coach of the Thorns in 2015.

A Championship Shield and a final in his two years in Portland has justified the organization’s faith in him, and he now faces, without question, the biggest game in his coaching career.

Overcoming the semifinal hurdle against Orlando last week, will have no doubt given him and his team confidence, but compared to Riley’s record of finals appearances, 31-year-old Parsons is a rookie in this environment. However, he stated in his press conference Friday that he has not changed his approach to the game, and ensured his team was ready for the challenge.

“Every single game at this club is a final, is a championship. There is no game where there is no pressure,” he said. “I honestly have not changed anything in my approach or how the staff approach it (the final). There is an excitement and enthusiasm to get on that pitch.”

Speaking to the players of the Thorns, much like those who spoke to The Equalizer about Paul Riley, there was nothing but praise.

Ashleigh Sykes, playing her first season with the Thorns, was top scorer in the W-League down in Australia and admitted there has been no previous interest from the United States in signing her. But she said when the Englishman contacted her about the chance of joining the Portland club, his confidence in her was a key factor for making the move.

“Probably the main reason I cane to Portland is because Mark really wanted me and made me believe that I was good enough to be a valued member of the squad,” Sykes said. “He’s one of the best coaches I’ve worked with in terms of his approach to the game, and the way he talks to people. Its been a pleasure for me working with him.”

Nadia Nadim, who will play her last game for Portland tomorrow, and Emily Menges, added that the culture created at the club by Parsons was hugely important for the team’s run this season.

“Its super important (to enjoy yourself) before practice, during practice and after practice, but you know when you have to be serious and get the work done,” said Menges,

“Fun is important for me and I don’t want to feel like I’m in a prison and it’s important that we have been able to have that space,” added Nadim.

Parsons said he celebrated the win over Orlando “with a cup of tea,” last week, but it’s likely to be something much stronger if his team triumphs tomorrow night. But standing in his way is arguably one of the best tacticians in the NWSL in Riley, who will be looking for his second Championship success.

Whatever the outcome, the two English coaches will deliver very different styles in the final, and much like a game of chess, could bide their time in the early exchanges of the match before starting to really make those game winning moves.