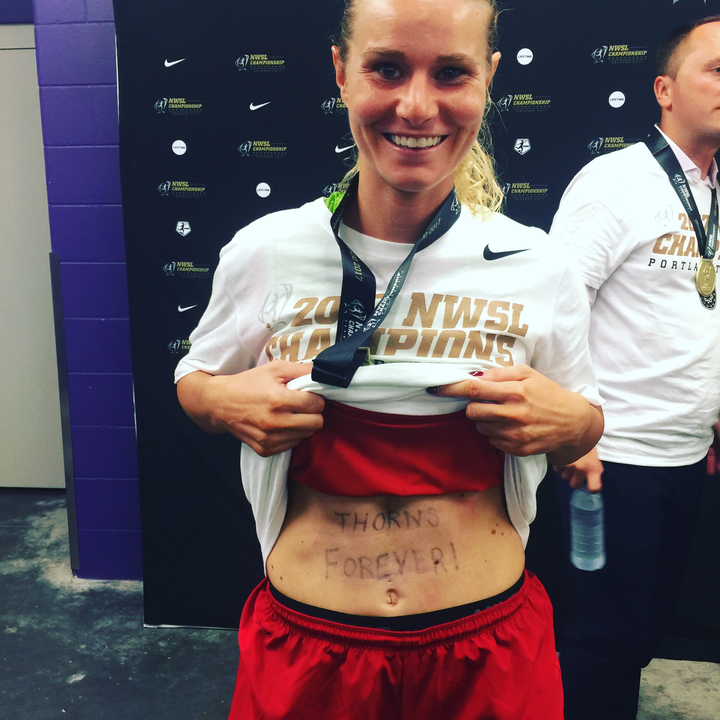 Amandine Henry is leaving Portland, but she will be a Thorn forever (photo copyright Allison Lee for The Equalizer)

ORLANDO, FL — ‘Thorns Forever’ is what was written across the stomach of Amandine Henry on her final match for the Portland Thorns as she and fellow European players Nadia Nadim and Dagny Brynjarsdottir claimed their first NWSL title. The trio, who represented their respective countries at the recent EUROS in the Netherlands, were all involved in their team’s 1-0 victory over the North Carolina Courage in Orlando.

Henry, who has won multiple titles with previous club Lyon – the club she will be returning to after this final – started and played 90 minutes before being replaced by Allie Long in injury time. Brynjarsdottir and Nadim were both second half substitutes, with the former playing a key role defensively to support her team in their quest to protect their lead. Nadim was left rather isolated up front with her team defending deep, but was always an outlet when they looked to counter.

The Denmark international, who joined the club at the start of 2016 from Sky Blue, said it “would be hard to leave such a great team,” but that she was also “satisfied” with her achievements at the club.

She said: “This is really, really special. I wanted to win this league and finish on a high, this is one of the goals I had. I feel accomplished and standing here with a medal and trophy is the highlight of the season.

“It‘s really tough to leave, its been amazing. Portland is an amazing club, the fans, I can’t even describe, everyone flew seven hours to see the game and nobody does that anywhere else.”

Head Coach Mark Parsons was equally positive about the role Nadim played, and praised her role with the club since she joined almost two years ago.

“I remember talking to her (Nadim) and bringing her to Portland, talking about her passion, her desire, her character. She calls it the Nadia effect on people, I call it a contagious personality. We knew that she was going to have to come on and see out this game for us and help win it for us. I don’t think you can praise players enough who accept different roles.”

Lyon bound Henry has been an ever present for the Thorns since making her high profile move from Lyon. Henry’s move made headlines across the world of women’s soccer having won numerous titles at Lyon and propelling herself to arguably the most complete midfielder on the planet.

She said before the final that “it wasn’t just about the trophy, but about the experience,” sighting that she didn’t speak a word of English before moving to the NWSL, but wanted to make sure she left her mark on the league.

Once again Henry showed why the Thorns will miss her and Lyon will benefit from her qualities with a sound performance in front of the Portland backline, and Coach Parsons was again full of praise for his departing French International.

As for Brynjarsdottir, injury curtailed the beginning of the season for her and she revealed after the final victory that there were doubts as to whether she would play at all this campaign.

She slotted in at right wing-back when coming on in the second half, with Parsons describing her as a  “little prodigy” in that position, stating that she had “learnt some lessons” playing there.

For Brynjarsdottir, the win was an emotional one, especially when celebrating with the fans.

She said: “It was a tough win. I thought after we scored we battled hard, and I thought we finished the game well.

“For sure the win is special. At one point earlier in the season I wasn’t sure if I was going to play this year. And now I have played in the EUROs, finished second in the league and won the Championship. When we were cheering at the end with the fans I almost cried. its been a long year and I have been through a lot. But I made it and we won.”