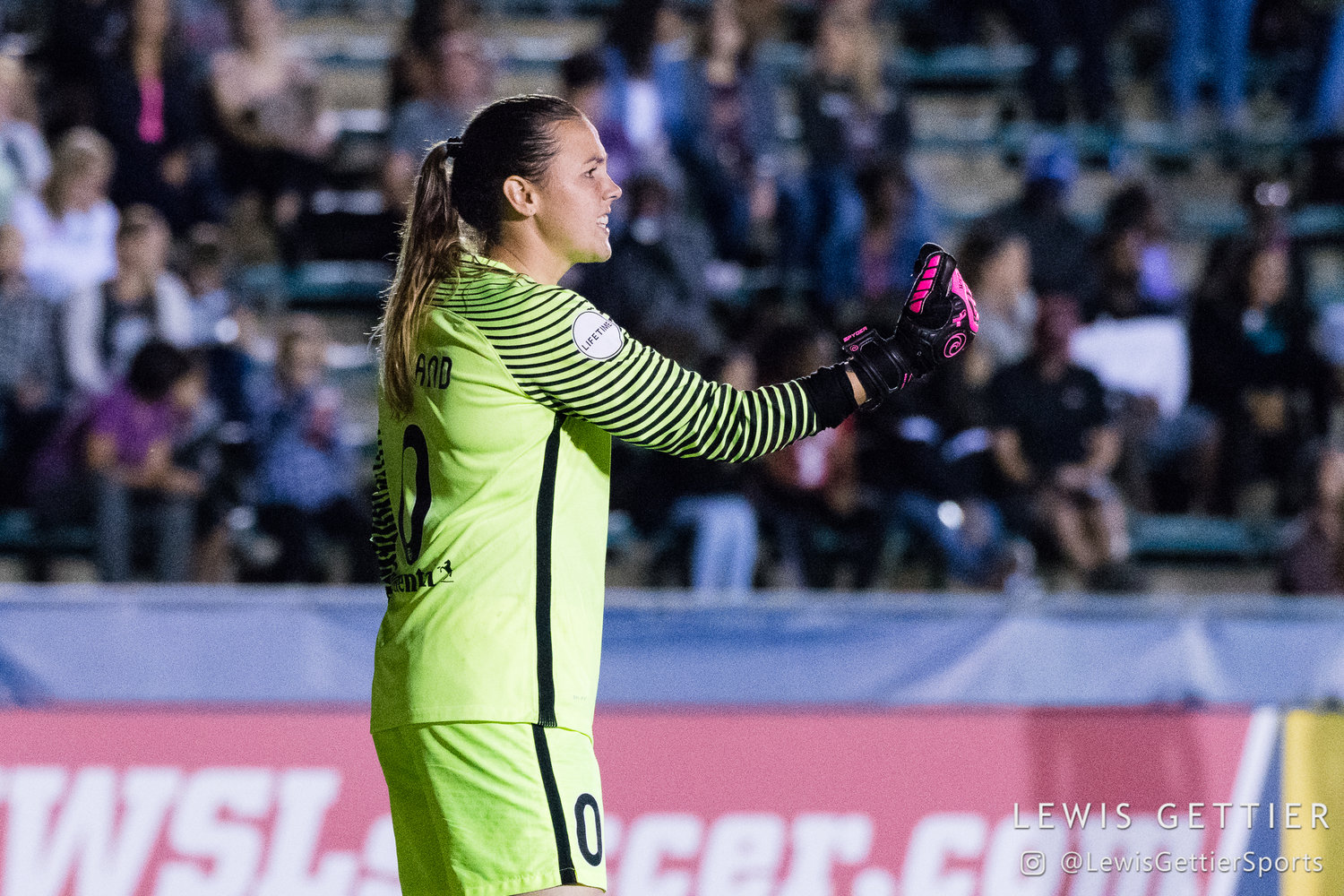 Katelyn Rowland is at her 3rd NWSL Championship in 3 seasons.. This time she’ll be the starter. (Photo by Lewis Gettier)

Here are some news, notes, and tidbits from Carolina Courage media day ahead of Saturday’s NWSL Championship.

Rowland back in final as starter

Katelyn Rowland’s first two seasons in NWSL ended with championships—as the backup goalkeeper. This time around the 23-year old figures to get the starting nod for the Courage against the Thorns.

“It’s definitely been different,” Rowland said. “I’m excited to play on the field. But throughout these couple of years I’ve been very blessed to be on teams that have welcomed me and treated me as a starter or as significant as anyone on the roster. I’m grateful for that, but I’m excited to be playing for sure.”

Rowland began this season on the bench behind Sabrina D’Angelo who was not only the starter last season but was MVP of the NWSL Championship after saving three penalty kicks against the Spirit. She got her first taste of the field this season in a midweek match and shutout Sky Blue. D’Angelo returned on the weekend and lost her third consecutive decision.

Rowland has been the starter ever since with one minor exception. D’Angelo got the second to last match of the season when a makeup game was squeezed into the final week. D’Angelo shutout the Dash and the Courage clinched the Shield.

“I’m so grateful that I got that game,” D’Angelo said. “I just wanted to go out there and enjoy myself. I was talking to our sports psychologist from Canada and I just wanted to enjoy the game and have fun. I wanted to feel light and free and not think about the pressures of the game. And that’s what I did.”

D’Angelo texted the sports psychologist after the game to say: “That was awesome!” On Saturday, she knows her role will most likely be restricted to cheerleading.

“Sabs is great,” Rowland said. “She’s a phenomenal goalkeeper and I’m very grateful to be training with her.”

Rowland, who was named to the Second XI earlier in the week, thinks of herself as being very relaxed in goal, an attribute that sometimes leaves people wondering.

“I look a bit nonchalant when I play but that’s not how I am,” Rowland said. “I just think I’m relaxed and comfortable. That has a lot to do with who’s playing in front of me. I’m really grateful to have them in front of me. That allows me to relax a bit, and just play.”

The ‘other” Houston Dash castoff

Denise O’Sullivan’s goal to win last weekend’s semifinal brought plenty of attention to the fact she was buried on the bench in Houston before being picked up by the league leaders. But O’Sullivan is not the only one. Stephanie Ochs began the season in Houston, then nearly caught on with FC Kansas City before finally landing a contract with the Courage.

“I was just so happy to come to this team and be in a new environment with a team that really just has a good mentality,” Ochs said.

Playing time has been sparse for Ochs, but the 27-year old is enjoying her time playing for the Shield winner after her first four NWSL seasons failed to yield playoff appearances in Washington and Houston.

“It’s been a really nice place to be. The team is full of great people. I think that’s really hard to find in the league,” Ochs, who won the WPSL Elite championship with the Western New York Flash in 2012. “I think with a lot of other teams it’s just a bunch of individuals who are kind of just doing their own thing and worried about themselves. But it’s really a team environment here and we have a pretty good mentality.

“In Houston, you’re struggling like day to day. You don’t really have this team identity there. And then when I came to North Carolina it was like ‘This is who we are and this is how we play,’ and either you’re on board or you’re not. That sounds kind of do or die, but I think it really helps this team because we all know what direction we’re going. It sounds nice because you’re going to the number one team but it really goes deeper than that.”

Ochs said he has not made any firm decisions about her soccer future but does not sound like a woman who wants to walk away from the sport.

“It’s hard because I’ve been playing for so long. I’ve been in this league since the beginning and I have an attachment to it. I don’t want to just walk away from something that’s getting better and better.”

While coaches have spent the last few weeks lamenting how the long season has created tired players, one person just keeps on ticking. Abby Dahlkemper played every minute for the second straight season, extending her regular season record to 5,580 minutes.

“If I can help my team by being on the field, I may be tired, but if I’m still helping the team and able to do my job, I am willing to do that,” Dahlkemper, who has started every game on offer since being drafted by the Flash in 2015, said. “Being on the field you get experience and you learn and experience things. So I might be tired but I’m thankful I am still on the field and that I’ve been able to play as much as I have.”

The two times it seemed like Dahlkemper’s streak might end were just after Tournament of Nations when she played 90 minutes for the Courage two days after doing the same for the United States. She then faced a Thursday-Sunday turnaround for her next two matches. The second was the final week of the season when Paul Riley went with squad rotation and rest after clinching a home game. Dahlkemper, who said that as far as she knows she has never had to talk herself into a lineup, never missed a beat.

For her efforts Dahlkemper was named to the Best XI on Thursday. “It was obviously such an honor. I think my team was able to help me get recognized.”

The Courage spent the no. 7 pick in the 2017 draft on Darian Jenkins knowing full well that she was not going to play for them as a rookie after a broken fibula cut short her senior season at UCLA.

By like this, Jenkins was referring to being able to train with the Courage every day—she was a near full participant in Tuesday training—and making theNWSL Championship her first road trip of the season.

“This has been a whirlwind,” Jenkins said.

Jenkins estimates that she has about another month until she can think about playing in a game. She also won’t have to worry about it since the new season is several months out and she has no plans to play anywhere else in the interim.

“Paul has been great about that. He has said since day one ‘I’m not trying to rush you. I just want you to get totally healthy,’ and looking out for the longevity of my career.

“Hopefully just one more month of PT (physical therapy) and then wash my hands of it.”