Deep into conference action, Week 8 of the NCAA season pulled no punches. Several of the top teams in the nation got key victories, inching them ever nearer to the most important parts of the season: conference tournaments followed by the granddaddy of them all, the NCAA tournament. There were few surprises during the week’s action, starting with West Virginia’s 1-0 win over Oklahoma State in our NCAA Game of the Week. Here’s a quick recap of what else went down in college woso action this weekend. 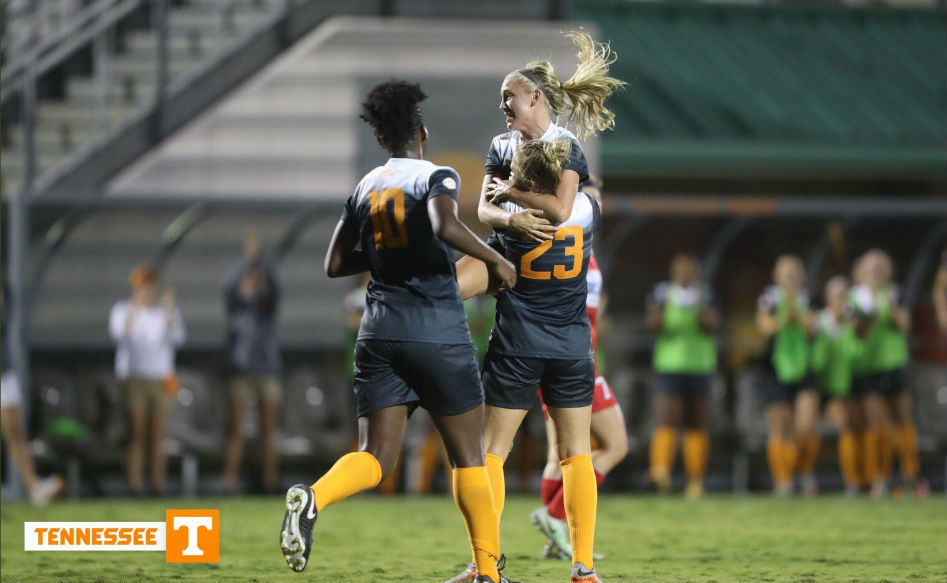 In a Thursday night showdown between two of the top scoring offenses in the nation, the No. 21 Tennessee Volunteers defeated the No. 24 Ole Miss Rebels, 6-4. The Vols were led by juniors Anna Bialczak and Rylie O’Keefe, both with braces on the night, and it was Bialczak who scored the game winner in the 57th minute for Tennessee.

Junior Kadija “Bunny” Shaw opened up scoring for the Vols when she scored her 10th goal of the season in the 13th minute, which was followed by Bialczak’s first goal just over a minute later when she scored off a rebound.  Bialczak also had the assist on Shaw’s goal. O’Keefe then scored the first of two in the 23rd minute, extending Ole Miss’s lead to 3-0 halfway through the first half. Ole Miss got one back courtesy of Grace Johnson in the 24th minute, but neither side would add to their totals before the halftime whistle.

O’Keefe completed her double in the opening five minutes of the second half, giving the Rebels what normally would have been a comfortable 4-1 lead. However, Ole Miss answered minutes later with two quick goals, the first by Channing Foster and the second by CeCe Kizer, two of the top goal scorers in the nation. Feeling the pressure, Tennessee answered through Bialczak, who completed her brace a minute after Kizer’s goal. Junior Danielle Marcano scored the go ahead goal for Tennessee in the 75th minute, and try as they might, Ole Miss was only able to put one more away. Ella Johnson’s long-distance goal in the 82nd minute was not enough for the Rebels, who were still down by two at the final whistle. 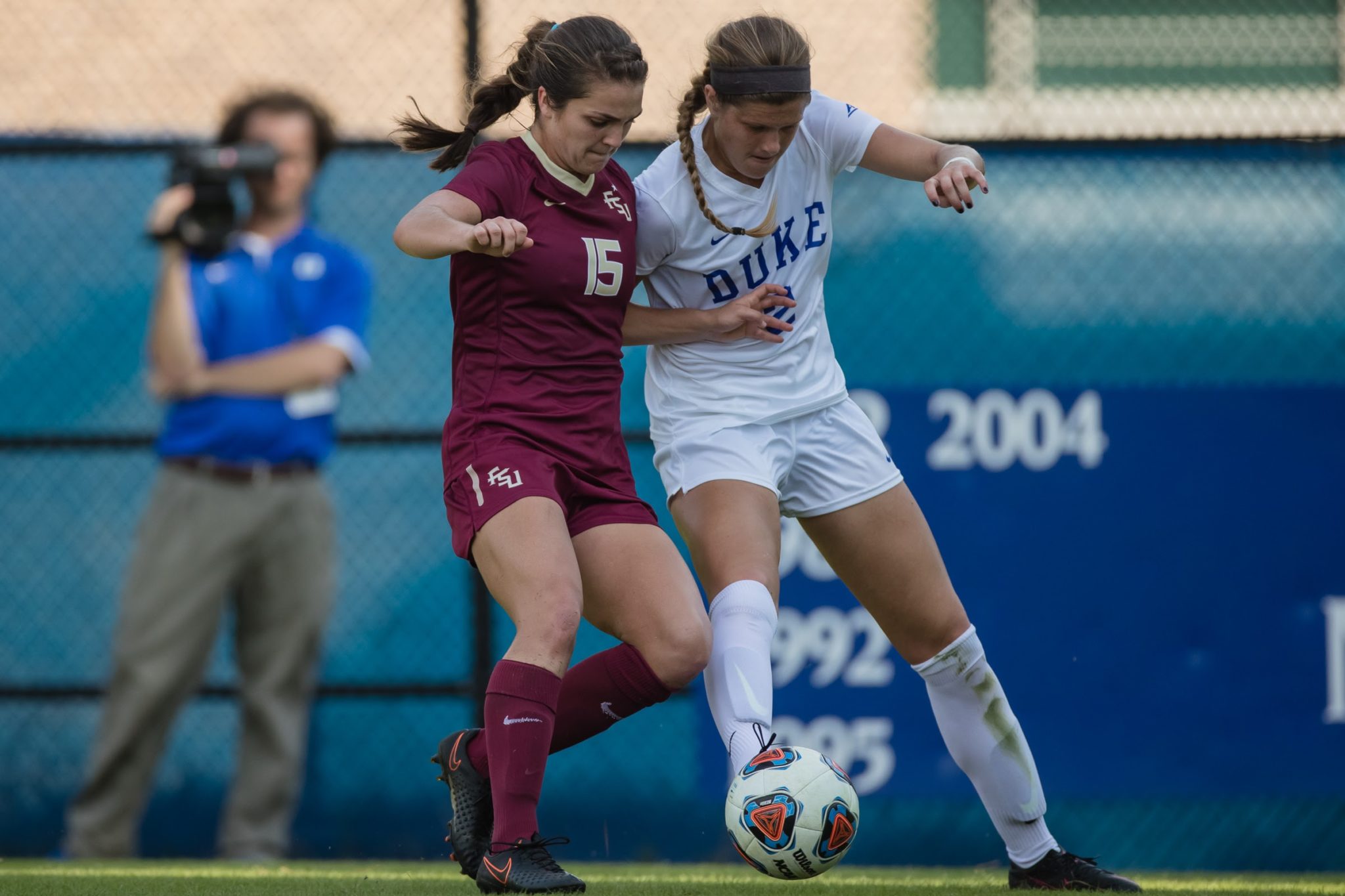 The Duke Blue Devils lost their season opener against the North Carolina Tar Heels but haven’t lost since, embarking upon a 13-game winning streak that has put them atop the ACC standings. Their latest victory was a 2-0 shutout of the Florida State Seminoles, who currently sit in fourth place in conference standings despite being picked to win the ACC in a preseason coaches’ poll.

Sophomore Ella Stevens and senior Imani Dorsey both scored in the first half to give Duke the win. Dorsey connected with Stevens through a cross into the box, which Stevens bounced off the right post and into the back of the net less than three minutes into the contest, the fastest Blue Devil goal of the season. Dorsey then found her way onto the scoresheet when Kayla McCoy’s attempt was deflected out and Dorsey buried the rebound in the 22nd minute.

The remaining 68 minutes went by without a goal, thanks in part to a strong defensive showing by Duke, as well as by another solid performance in goal by EJ Proctor. Although she was largely untested by the Seminoles, Proctor did tally two saves on the night, earning her seventh and Duke’s ninth clean sheet of the season.

The top-ranked UCLA Bruins faced one of their toughest challenges this season in a somewhat surprising opponent, drawing the unranked Arizona Wildcats, 2-2, for just their second non-win of the season.

The Bruins started off in control of the game, with Hailie Mace and Anika Rodriguez giving UCLA a two-goal lead before the half-hour mark. Mace, the Pac-12’s leading goal scorer, struck first in the 21st minute, getting on the end of a through ball from Rodriguez and sending it far post to beat Wildcat keeper Lainey Burdett. Rodriguez added a goal to her assist minutes later when she converted a penalty for the second and final Bruin goal.

Arizona got on the board in the 35th minute after a bad back pass to UCLA keeper Teagan Micah was intercepted by Arizona, setting Hannah Clifford up in front of a wide open net for an easy Wildcat goal. The Wildcats scored the equalizing goal in the second half after forcing a UCLA turnover. Jada Talley gained possession before playing the ball up to Amanda Porter in the box, and Porter’s shot sailed into the right corner to level the score.

UCLA had the chance to retake the lead in the 72nd minute after being awarded another penalty kick, but Mace’s shot was saved by Burdett, who made several more crucial stops late in the game to hold the Bruins to a 2-2 ball game.

Elsewhere in the NCAA:

– Notre Dame and No. 13 Virginia battled to a 1-1 draw on Thursday night. Sandra Yu put Notre Dame up a goal in the first half, but senior Veronica Latsko scored a second-half equalizer to send the game into overtime. Neither side could find the back of the net again for the golden goal, resulting in the draw.

– No. 6 USC stayed undefeated in Pac-12 action (4-0-1) with a 1-0 double-overtime win over Arizona on Thursday, followed by a 2-1 win over Arizona State on Sunday. Alex Anthony converted a penalty kick-slash-golden goal in the second overtime period to hand the Trojans the shutout over Arizona, while Tara McKeown and Amanda Rooney led the come-from-behind victory for USC on Sunday.

– Last Tuesday, October 3, Alabama A&M defeated Talladega College, 13-0, for the most goals by a team in a single game this season. Most surprisingly, it was the first win for Alabama A&M, improving their record to 1-11-0 on the year.

– Butler closed out the weekend with two shutouts—a scoreless draw against Xavier on Thursday night and a 1-0 win over St. John’s on Sunday. The clean sheets make the Bulldogs the best defense in the country, having conceded only two goals on the year for a .144 goals against average (GAA).