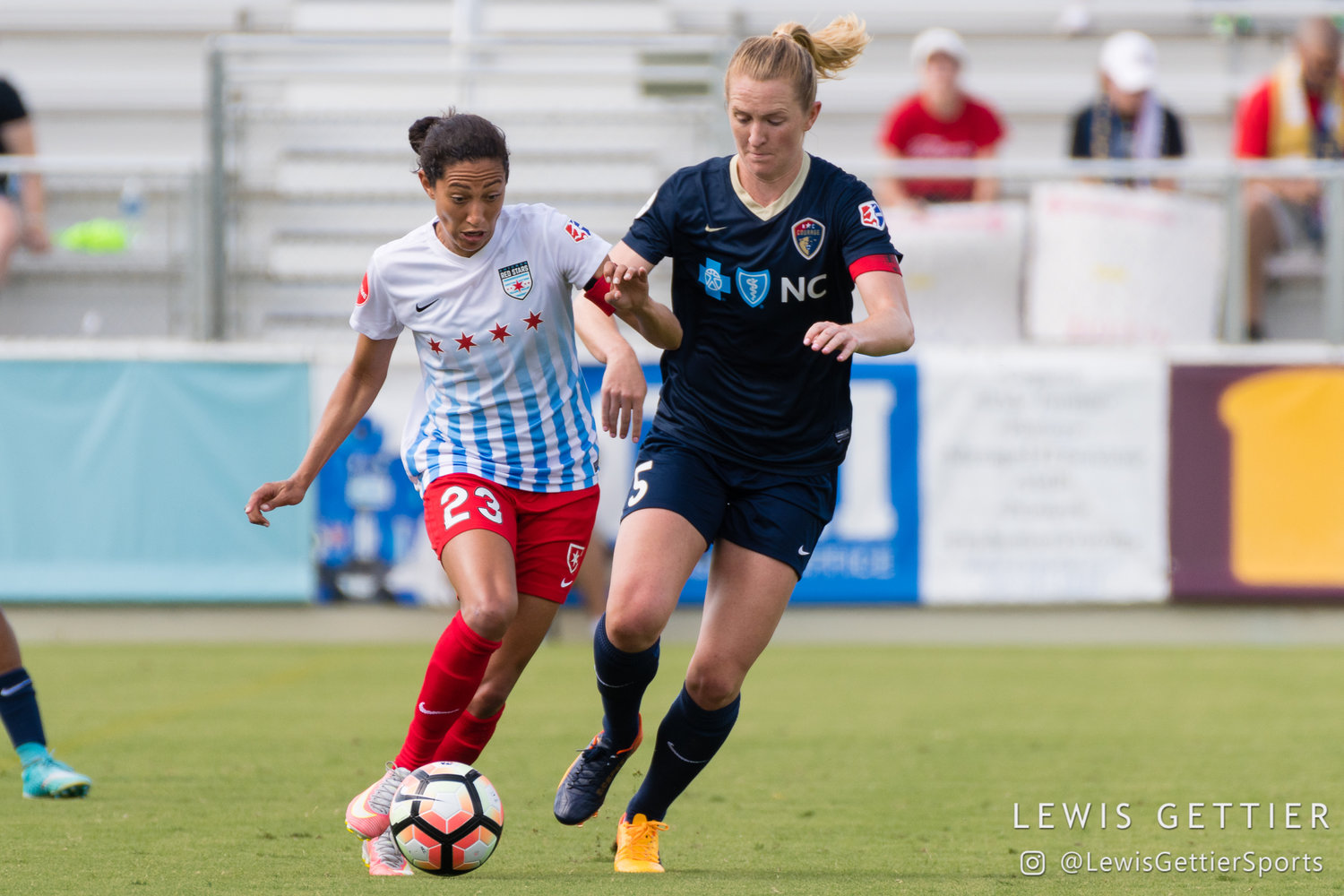 One day after the Thorns booked their place in next Saturday’s NWSL Championship, the North Carolina Courage will host the Chicago Red Stars for the right to face the Thorns. The Red Stars beat the Courage three times this season. Will this one be different? Chelsey Bush and Allison Lee discuss:

If you had to describe each of the two teams’ seasons in only one word, what would it be?

Allison: For the Courage, I say dominant. They’ve been the top-ranked team all but one week this season, and everyone else has been playing chase with them into the postseason. For the Red Stars, I say uncanny for their uncanny way to pull out wins in otherwise mediocre or lackluster performances. That’s no disrespect to Chicago, but I feel that, for the personnel on the squad, they should have been better than they were.

Chelsey: I agree with dominant for the Courage. My word for North Carolina is steady. As you’ve said they’ve remained or near the top of the table from the beginning, and even when they had a stumble I never got the impression they were on a skid. For Chicago, I say passable. I don’t think there was one game where they looked completely in command for all 90 minutes, but they got enough results to keep them in playoff contention all season long.

The two coaches took pretty different approaches in the final weekend of the regular season, with Paul Riley starting almost his usual XI but Rory Dames making as many changes to the lineup as the roster would allow. Which of those two approaches do you think will be more beneficial in regards to the playoffs—rest, or “if it ain’t broke don’t fix it”?

Chelsey: With these two teams in particular, I think if it ain’t broke, don’t fix it. They’re both going into this match after a loss, so momentum isn’t exactly there, but the Courage have such chemistry and rhythm that I think it would have done more harm than good if Riley had rested a large portion of his starters as Dames did.

Allison: Even though both teams are coming off of losses, I think both coaches made the right moves for their respective teams. The Courage has so much depth, Riley could play more of his starters and be okay if he needs to resort to his bench this weekend against Chicago. As showcased in Portland, the Red Stars don’t have as much depth, so Dames was wise to rest his starters ahead of a tough semifinal match up. It also may have been a little gamesmanship by him as well, as the loss in Portland puts the Red Stars in fourth place and a semifinal match against an opponent they swept this season.

Chicago beat North Carolina in all three meetings this season. How much does that matter going into this match?

Allison: It wouldn’t be a conversation about the NWSL without the word parity being brought up, and this is where it comes into play. The Red Stars won three times against the Courage, including once in Cary, and outscored the Courage 8-4. If nothing else, that will give the Red Stars confidence ahead of Sunday’s semi. However, the Courage have thrived on an junkyard dogs mentality all season, so being somewhat of the underdog may actually work in their favor. In other words, I don’t think it matters much at all.

Chelsey: I agree that it doesn’t matter so much. If anything, it would affect their mentality—Chicago being too confident or North Carolina overthinking things—but I think this game is big enough that they’re going to overcome that. I might say differently if it were a regular season game, but nerves are big enough as it is in playoff situations. I do think it adds an interesting twist in that the team who normally would be an underdog, Chicago, since they haven’t advanced past the semifinals yet and they are playing the defending champions, actually comes into this on perhaps more of an equal setting than they otherwise might have been.

Which team do you think feels more pressure?

Chelsey: All that said above, I feel like Chicago has more pressure. They haven’t been able to advance to the final in two successive seasons, and they made much of their marketing campaign this season about getting revenge and making it to the final this year. It’s clearly something that is very much part of their mentality. Plus, I never get the sense that the Courage feel pressure. Dating back to last season, they are a very loose, confident team, and they already have one piece of hardware this season, which can only boost that confidence.

Allison: I agree that Chicago feels more pressure. Even before the season started, the players were talking about how this year was going to be different, this year they were going to go all the way. While every team set out ahead of the 2017 season with the goal of making it to the final, it was more than a goal for Chicago. Like Chelsey said, it was almost like the Red Stars are out for revenge after crashing out during the last two semifinals. If Dames did employ a little gamesmanship to get an “easier” opponent for the semi, I think that just further proves it.

Who are some impact players from both sides’ in Sunday’s semifinal?

Allison: As the old adage goes, offense wins games while defense wins championships, but as the not-so-current meme says, get you a girl who can do both. That’s why my two impact players are ones who are defensively-minded but also threatening in the attack: the Courage’s Sam Mewis and Chicago’s Julie Ertz. I feel like the midfield is where the semifinal will be won or lost on Sunday, and Mewis and Ertz have been two of the most impressive midfielders in the league this season. I’d be remiss not to mention McCall Zerboni, who has had arguably the best season of her career with the Courage, but I still have to give this one to her counterpart Mewis. On the other side of the field, Ertz completely changed Chicago’s game once she moved into the midfield, and she was integral in each of Chicago’s three wins over Carolina.

Chelsey: I’m actually going to go to the flanks. While both teams have very strong central midfields, I think North Carolina is stronger on the wings and they’d be smart to move the ball up the pitch that way. So players like Makenzy Doniak and Taylor Smith will be essential in using their speed to quickly launch an attack and catch the Red Stars backline in transition. However, opposing them is one of the best 1v1 defenders in the league, Casey Short. I think she is going to have her hands full and will have to be on top of her game to shut down the Courage.

Is the “curse of the Shield” a real thing?

Chelsey: No, it’s not actually a real thing, and I doubt the Courage have given it two thoughts. While no other Shield-winning team has won a championship in the same season, every trend is broken eventually. However, I do think it’s worth mentioning that the 2014 Reign were similar to the 2017 Courage in that they were so completely dominant in the regular season (running away with the Shield even more than the Courage), but they fell in the final. So I’m curious to see if history repeats itself here.

Allison: Athletes are some of the most superstitious people out there, so if the players believe the curse is real, that’s all that matters. As of now, the “curse” is real in that no Shield winner has ever won the championship trophy (which, really, the Shield is a much nicer piece of hardware than the other, but I digress), but like Chelsey said, it only takes one team to break that streak. If the Courage do go on to win it all, fans will probably laugh about how silly the idea of a curse was, but if they lose, I think many more people will begin to believe in it.

Okay, so who’s moving onto the final?

Allison: I’m going to give this one to the Courage. Yeah, they lost three previous times this season to the Red Stars, but playoffs are different and I think they’ll rise to the challenge. Plus, we’ve seen how poorly Chicago has handled high-pressure games in the past, and they’re likely to make too many costly mistakes to pull off the upset in North Carolina.

Chelsey: I also have to go with the Courage. They’ve been on a roll since day one and even in the few times they’ve hiccuped – the losses to Chicago among them – they’ve never looked out of it. Also, as Allison mentioned previously, they have the deeper bench, and many times games like these come down to the impact of subs.