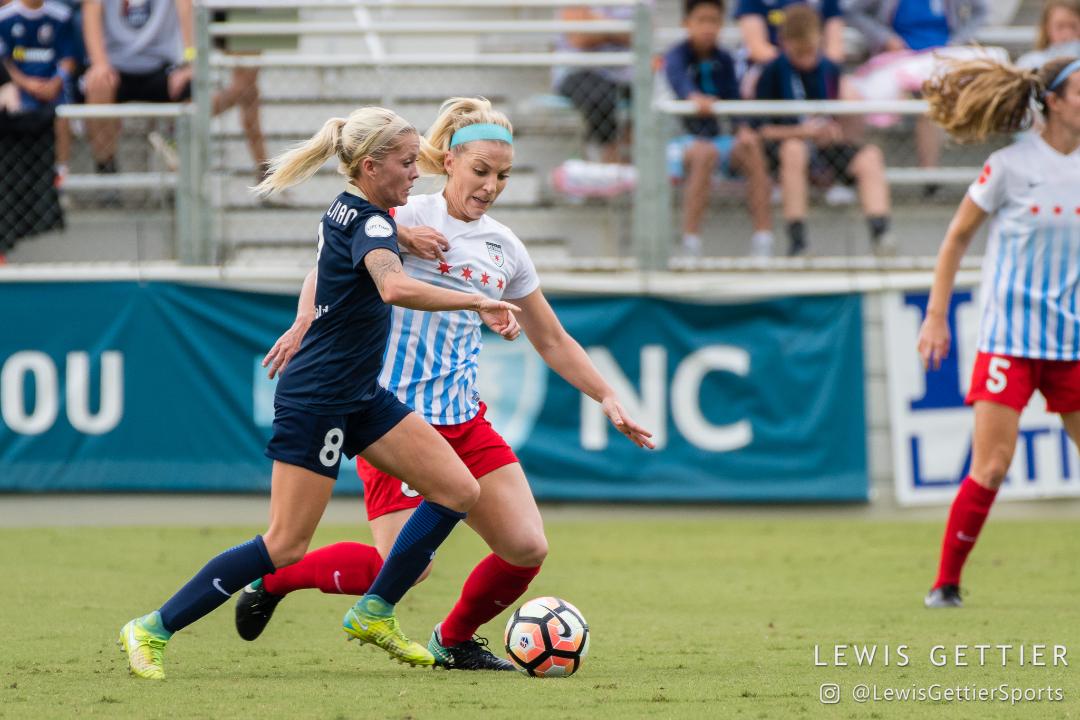 Denise O’Sullivan and Julie Ertz, whose fingerprints would be on the match at the end, battle on Sunday (photo copyright Lewis Gettier)

For the first time in an NWSL playoff history that now spans 14 matches, the winning goal was scored in the 90th minute. After an opening half hour that was defined mostly by choppy play and a gruesome elbow injury to Debinha, the North Carolina Courage began to take control toward the end of the first half. They remained there throughout the second, finally winning it 1-0 when Denise O’Sullivan’s shot deflected off Red Stars’ midfielder Julie Ertz’s knee and past Alyssa Naeher for the only goal of the contest.

Here are three thoughts from the match, which was played before a Courage record crowd of 10,017.

The unlikeliest of heroes—for two reasons

Two things made Denise O’Sullivan the unlikeliest of people to blow up a 0-0 score. First, she began the season in Houston where her playing time dwindled for the Dash. Second, her ability to hit a ball from long range had become something of a running joke during the week.

For her part, O’Sullivan didn’t exactly disagree: “To be honest I didn’t think I could score from the edge of the box or even make it that far, but I hit it as hard as I could.”

In the bigger picture, when a player is waived by a team near the bottom of the table they don’t usually wind up scoring the goal that takes the team at the top of the table to the NWSL Championship. In fact O’Sullivan figured she would be leaving NWSL altogether when they Dash agreed to cut her loose.

“I really didn’t know what was going to go on,” the Irish midfielder said in the tunnel after the match. “There was talks of going to Germany and Euope. And then I got that call from Paul saying they were interested. The league is great so I wanted to stay. The minute he phoned me and said there was an opportunity for me to play in the midfield, there was no talks. I went two days later so here I am.”

Riley recalled being impressed with O’Sullivan last season when the then Western New York Flash played the Dash to two draws.

“She killed us in both games we played. I thought she ran the show against us both times they’ve played is.”

Red Stars under performed on the day

As bedlam rained down on Sahlen’s Stadium, the Red Stars gathered in the middle of the pitch, most of them seated in a circle, and listened to Rory Dames address them as a group for the final time in 2017. It was another stinging defeat for the team that ran in the top two for the first half of the season before slumping to squeak into the playoffs as the No. 4 seed. And a year after Christen Press rang a would-be semifinal winner off the crossbar at the death, this time it was a late concession that did in the Red Stars.

“The message to the players at the end of the game was “you can evaluate yourself, what you did and didn’t do in this kind of a game.’ Then as a staff we obviously need to do a better job of managing players throughout the season so when we get to the end, our players are able to perform at their highest level. For whatever reason, we looked tired.”

Dames added that not all of his players turned up on the day, and said the biggest downside of clinching a playoff berth late was that instead of using squad rotation to rest his best players down the stretch he went with a mass lineup change for last weekend’s regular season finale in Portland.

“Some of the players on our team didn’t show up, myself included,” Danielle Colaprico volunteered. On her own game she added: “I don’t think I played poorly in the game. I don’t think I made as much of an impact as I could have. It’s hard when we don’t get a hold of the ball because that’s my style of play. When we don’t have the ball, we’re transitioning a lot, it becomes an athletic battle and that is difficult on your team.”

Colaprico also acknowledged that the Red Stars were a bit out of sorts in recent weeks after sometimes looking unbeatable early in the season. “I don’t think we ever found that rhythm we had in the beginning of the year. That was hard with a chunk of our players coming in and out of the national team so we could train as a team.”

Dames said the loss will sting for a while but that soon it will be “time to put Humpty Dumpty back together again.”

Casey Short summed it up very succinctly: “It’s going to hurt for a while.”

The Courage decided to run much of their attack to their right which meant frequent confrontations with Red Stars left back Casey Short. Had they failed to get the goal that won them the match, that tactic likely would have been called into question. Short was a rock in her defensive third, rarely if ever allowing even the speediest of Courage players to turn her. But the Courage just kept coming.

“I was like ‘can you guys go to the other side please?,’” Short joked. “I honestly felt like I was defending the entire game. I got into the attack maybe one time. So that’s kudos to them.”

Short did get caught up the pitch once. That’s when Ertz made a world-class recovery run to cover for Short and limit Lynn Williams to a corner kick. The Red Stars cleared that play but conceded another corner kick and from that the Courage scored the only goal on the day.

“I’m not sure everyone turned up for us, but I thought Casey was fantastic. When the lights go on and it comes, Casey always turns up. She thrives in those situations.”

Riley said keeping Short from attacking was not a factor in deciding to attack her side most of the day, instead suggesting it was to allow his own right back Taylor Smith opportunity to go forward. The result says he will not have to answer for that decision, but defensively speaking there is not a left back in the world who could have matched what Short did on Sunday.